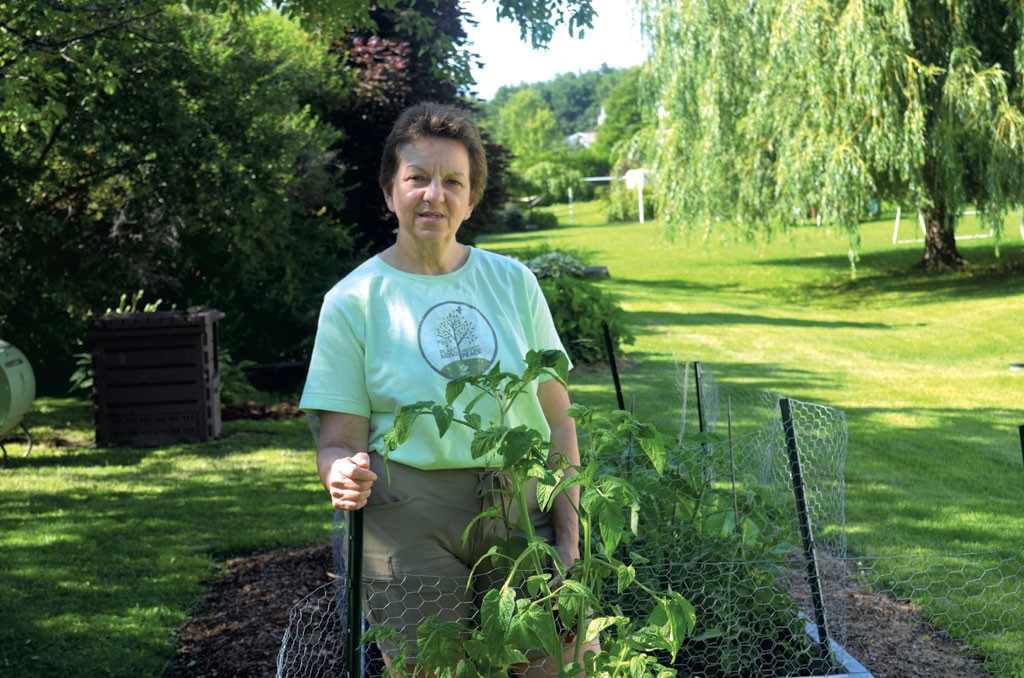 The pale green lettuce sprouting in Rosanne Greco's suburban South Burlington backyard is full and healthy. Yet she's the first to admit that the vegetables growing in a raised bed next to hers are superior.

Her neighbor Claudia Miller cultivates that neatly planted plot. The two are participating in an informal yard-sharing arrangement designed to encourage people to grow food close to home. Miller's nearby townhouse has no place to grow anything.

But tomatoes, it turns out, can cause trouble. The garden matchmaking is one of several ideas— such as no-mow lawns — that the South Burlington Sustainable Agriculture Subcommittee is promoting. Greco, a former city councilor known for sharp opinions, chairs that appointed city body.

Three South Burlington city councilors have raised concerns about the scope and work of the subcommittee, which has a rocky history. It was first created as a subcommittee of the city council in 2012 to promote local food production. It was contentious then, too. Critics said it was stacked with antidevelopment members, and it disbanded in the spring of 2013. The planning commission brought it back to life a few months later as one of its subcommittees.

Today, some council members would prefer to see the effort relegated to private nonprofit status — and to stop using city letterhead altogether.

Pat Nowak, chair of the city council, worried at a public meeting in May that the garden matchmaking venture might present a liability to the city, as broker of the arrangements, even though the planting, weeding and harvesting take place on private property. During a joint city council and planning commission meeting, Nowak said, "We honestly don't need another lawsuit in South Burlington."

She is also concerned that the subcommittee is considering fundraising that is not in its purview, and that its work is too open-ended.

Council members Thomas Chittenden and Chris Shaw also have expressed reservations about the subcommittee's work. It's draining time and energy with debate about small things like gardening when city officials should be talking about big things, like view sheds, said Shaw. "It's the distraction factor," he said.

Greco counters that what the councilors don't like is the subcommittee's effort to preserve the city's remaining open land from new subdivisions. They are also reacting to her stances on hot-button issues, she suggested. Greco led the unsuccessful opposition to the basing of F-35 fighter jets at Burlington International Airport, a much debated and divisive issue on the council and beyond.

Friction from such issues led to a power struggle in 2013. Greco, then council chair, advocated for controlled growth and supported zoning restrictions that some considered extreme. Running for council, Nowak and Shaw campaigned against the rules and won. They were part of the unanimous vote to oust Greco as chair.

Greco ultimately decided not to run for reelection. Now the sustainable agriculture debate appears to be rekindling political rivalries. "They dislike me personally, so they are lashing out at SusAg," Greco said of the councilors. "I am sort of controversial."

Greco lives the cause. Granted, the house she shares with her husband is part of a suburban subdivision that some might see as textbook sprawl. It sits across from the Vermont National Country Club golf course, with little pedestrian access to anything but the fairways. She said that when she moved to Vermont, she knew nothing about the area and, if she could do it over, she would choose a Chittenden County neighborhood with more pedestrian access.

But she subscribes to the "bloom where you are planted" theory and tries to promote green living in the heart of the 'burbs. Both cars in her driveway are fuel-efficient, and bright yellow, like the sun: a Volkswagen Beetle, and a Toyota Prius that gets about 50 miles a gallon. She installed solar panels on her roof that generate more power than the house uses. Her garden hoses connect to rain barrels. She composts and shares compost with any neighbor who asks. She has planted berry bushes and fruit trees all over the yard to limit her grass cover, and for fresh food.

She and her husband still have plenty of lawn to mow. But the strategies of growing edibles and planting natural grasses that don't need to be cut with fossil fuel-powered mowers are ideas the sustainable ag group promotes.

She is acting on her larger belief that environmental practices are needed to save the planet, Greco said. "I really believe in the power of people to make change," she said.

Greco's seen a lot of changes herself. She grew up outside Scranton, Pa., in an old house that was more dilapidated than historic, she says. Her father was a coal miner who shifted to heavy construction work after the mines closed. He died at age 49 after collapsing on the job. Greco was 9.

Her widowed mother struggled to support the two of them. "She worked in factories, she cleaned houses," Greco said. "I used to help her clean houses."

On the eve of her 14th birthday, Greco felt the calling to become a Roman Catholic nun. She left home and entered a convent run by the Sisters of Christian Charity in Mendham, N.J., returning to Pennsylvania during summers.

She finished high school and started college while at the convent. She was preparing to take her vows at age 20. But then the nuns kicked her out for asking pushy questions about the order's social mission, Greco said. She added: "I learned the nuns don't like to be challenged."

It was an adjustment to leave the security of the sisterhood. "I'd never had a date, never been kissed, never had a job," Greco said.

She worked in a factory, and, on the advice of a nun friend, applied for financial aid to finish her degree. She graduated from Kean College in New Jersey with a bachelor's in psychology.

"Nothing's been given to me, nothing. I remember the days when I agonized over a 10-cent phone call," she said.

Not long after graduation, she decided to join the Air Force to help pay for her graduate schooling and because it promised opportunities for women.

Over several decades, she worked her way up the ranks in intelligence posts. Her career took her all over the world and taught her, she said, that determination and work can go a long way. She eventually became an Air Force arms-control negotiator.

Often, she was the only woman at the negotiating table. She said that being in this position honed her earlier inclination to be assertive, perhaps more so than many women.

Greco moved to Vermont in 2007, a few years after she retired as a colonel. Now she is financially secure and wants to give back, Greco said.

She's still exercising that assertive tendency, this time in the debate about sustainable agriculture.

Council member Shaw has his own view of Greco: "I'd say Rosanne would like to imagine herself as a lightning rod" but in reality she's probably more like a self-sparking "Van de Graaf generator."

He agrees with Nowak that the subcommittee should be a private nonprofit organization. That decision would be the planning commission's, which has so far made no move to change the subcommittee's status.

The subcommittee is working to preserve prime agricultural soils, boost community-supported agriculture programs and promote the notion that even a bustling suburb can have appropriately scaled farming. In January, its members sent a letter to the public urging landowners to consider conservation and small-scale agriculture on any plot larger than five acres. (The subcommittee has no budget, but the city paid the postage.) In April, they held a public meeting on the "growing connections" garden-share idea. About 12 people showed up. In May, they held a session on "no mow" yards at the South Burlington public library. About 10 people attended.

Claudia Miller saw a notice about the growing connections meeting and met Greco for the first time there. They talked, and soon Miller was growing eggplants and tomatoes in Greco's yard — which, as it turns out, is within walking distance of Miller's townhouse. "It was a wicked coincidence," said Miller, a retired IBM engineer who thinks the program is an excellent idea. "I think other people would benefit too."

So far, they are the only two people participating in the program.

Despite the low numbers, plenty of people appreciate the work of the Sustainable Agriculture Subcommittee, Greco said. "This is a big gardening culture here. Why those three city councilors have a fear of gardeners is beyond me."

Contrary to Greco's assertion, Nowak, Shaw and Chittenden maintain that they support many of the green efforts. The issue is not about Greco or the concept of sustainable agriculture, Chittenden said in an email. He also said Greco has taken out of context his comments at public meetings about the group.

"I did state that I have observed 'unbalanced advocacy' from this subcommittee affecting the attention of the parent committee, the planning commission," Chittenden wrote. "I am concerned that this attention is distracting the planning commission from the broader interests of the community and from their very important tasks, like the Comprehensive Plan and Land Development Regulations..."

South Burlington's heavy strip development along Route 7 and Route 2, and the many condos, apartments and subdivisions in the city give it a strong suburban identity. The pace of housing construction remains below the boom years prior to 2007 — the beginning of the Great Recession — but the number of residential permits approved increased the last three years in a row, with a total of 121 units last year. Still, rural nooks and vistas remain, especially in the southeast quadrant, where more restrictive zoning has slowed development.

At the heart of the dispute in South Burlington seems to be the question: What form will "progress" take?

Now 66 years old and many years removed from the convent, Greco continues to speak up, just as she did as a novice. She believes that advocating for small changes, such as sharing backyard garden space, could one day lead to big changes in behavior that improve the environment.

She said, "The stuff we're doing is just seeds, tiny seeds, that hopefully will grow."