Stuff as Dreams Are Made on: Vermont Shakespeare Moves Ahead 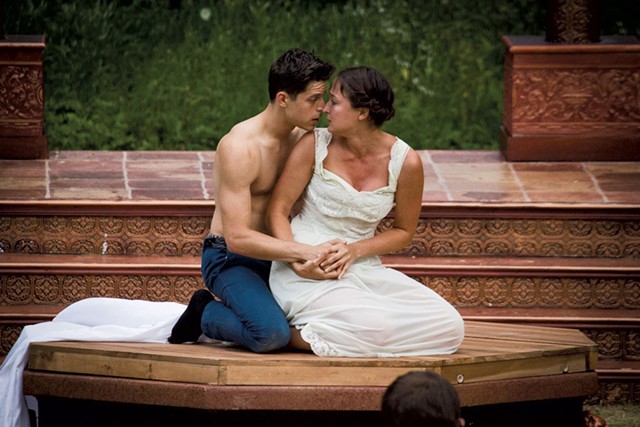 Founders (and spouses) Jena Necrason and John Nagle have had their eyes on the goal of creating "a nationally recognized Shakespeare festival in Vermont" — as Necrason puts it — since launching the nonprofit in 2005. And there's nothing simple about that. "We changed our name," Necrason says, "because some people didn't quite understand that we wanted to fill that niche." She cites the long-gone Champlain Shakespeare Festival as a local predecessor.

"We're just trying to push that forward," Necrason adds. "It's an exciting time in our development — we're looking for ways to move beyond just one big event in the summer."

Both seasoned Shakespearean actors, the couple met during a production of Richard III in New York City. For years they lived there or in New Jersey, and came north in summers to put on multiple performances of a single Shakespeare play at Knight Point State Park in North Hero. In 2012, they added Burlington shows at Oakledge Park. That was also the year their production of The Tempest was nearly a wash — owing, ironically, to drenching rains. Though disappointed, Necrason and Nagle did not bow to the weather gods.

Finally, in 2014, the couple moved to South Burlington with their young son. That year they produced A Midsummer Night's Dream and added two new performance venues: the Shelburne Museum Circus Lawn and the University of Vermont's Royall Tyler Theatre. UVM offered not just a new stage — the company's first indoor one — but a promising collaboration with the theater department. Necrason and Nagle engaged theater majors, five of whom performed in Midsummer, and provided summer training and internships. Further evidence of the relationship: Theater department chair Gregory Ramos is president of VSF's board.

Necrason continues to fly to New York a couple of days a week to teach at Stella Adler Studio of Acting, where she's the head of the movement department and works with New York University undergraduate thespians. Last November she was part of the original, criminal-justice-themed work Intersections with other local actors at FlynnSpace. This month, Necrason was artist-in-residence in Phoenix, Ariz., giving classes for theater and dance students. For his part, Nagle has performed with Vermont Stage Company, and is employed as manager at Bistro de Margot in Burlington.

In addition, the two have been actively building their board of directors and pursuing partnerships with local businesses.

Despite their busy schedules, living locally has allowed Necrason and Nagle to offer Shakespeare events year-round. They began small, with salon-style readings at their home, and are resuming that format this year. The first Shakespeare salon of 2016, a reading of Love's Labour's Lost, will take place on Monday, January 25, at Burlington's New Moon Café. Necrason says the salon is a fun and informal way to explore some of the Bard's lesser-known plays: "It's a great way for people who love Shakespeare to get involved."

Nagle will take the director's chair next month at Middlebury College for excerpts of Will. That play, written by Midd grad Jon Glascoe, is part of the school's First Folio Festival. (A copy of the actual folio of Shakespear's plays, published in 1623, is on temporary loan from the Folger Shakespeare Library and will be on view.) It imagines Shakespeare himself being interrogated — by Queen Elizabeth I, no less — for his presumed role in a treasonous rebellion.

And, speaking of people in power, Vermont Shakespeare's summer production will be Julius Caesar, directed by Necrason. It's an election year, she points out, adding, "We thought it would be good to pick up on that energy. It's a play about political ambition."

Caesar, Brutus, et al. will meet their fates on the lawn of the Shelburne Museum and in Royall Tyler's black box well before we know the outcome of the presidential election. It remains to be seen whether those results will inspire Necrason and Nagle to reprise Richard III.