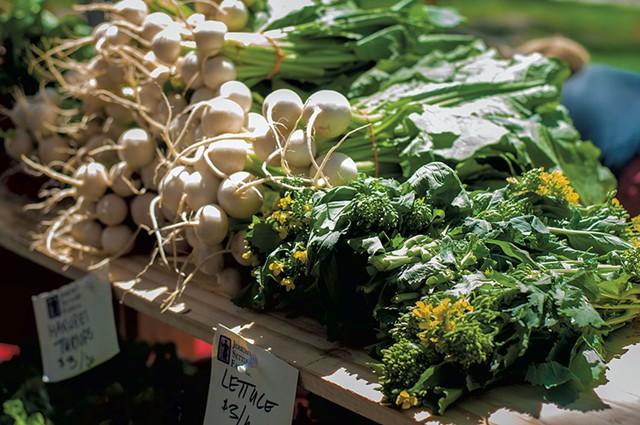 Most farmers and food-system workers cite price concerns as a major factor in keeping some locals away from farmers markets. "People have this perception of [farmers markets] as being elitist or more expensive," says Abbey Willard, food-systems section chief at the Vermont Agency of Agriculture, Food & Markets.

Last summer, Willard's department set out to learn whether the numbers back up that perception. Using funds from the U.S Department of Agriculture's marketing service, workers compiled pricing data from 13 central Vermont farmers markets and compared them with five area grocery chains.

The results? Willard says she was "pleased to see that 92 percent of the time, certified organic produce at farmers markets was competitively priced with retail stores."

Local meats and other proteins were also comparably priced nearly 60 percent of the time, while nonorganic Vermont produce could compete with local produce in supermarkets nine times out of 10. Nonorganic local fare was cheaper at the market than at box stores 66 percent of the time.

Though the farmers market foods were by and large pricier than the national commodity meats and produce that make up most of the fresh food at supermarkets, the study concluded that shoppers purchasing local or organic foods could usually find comparable value at their local market, within a 10 percent margin.

The new study corroborates similar results from a 2010 Northeast Organic Farming Association of Vermont study. "There is consistent trending to demonstrate that local food can be competitive," Willard says. Of course, more data are needed — the agency plans to conduct a follow-up study this summer.

For now, Willard emphasizes that the study lacks power without open dialogue between farmers and consumers. "Farmers have so many networks for connecting with consumers," she says, whether at the market or through a CSA or farm stand. To foster those connections, the ag agency recently launched a map-based online directory of farm stand locations and the offerings at each.

The original print version of this article was headlined "Comparison Shopping"