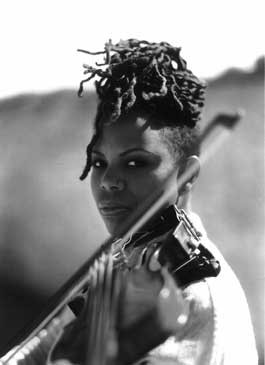 Jazz violinists aren’t exactly a dime a dozen. Though Jean-Luc Ponty and Stephane Grappelli come to mind right away, most casual fans would be hard-pressed to name another. Enter Regina Carter, jazz violin’s hottest practitioner since Ponty broke out from the pack in the ’60s. The nose-ring-sporting Grammy nominee has picture-perfect posture, astounding technique and a warm, thick tone. The audience at her Discover Jazz Festival show this Saturday will find that she’s also charming, charismatic and friendly.

The Detroit native began classical studies when she was 4 and didn’t hear jazz violin until she hit her teens. Her jazz exposure was initially limited to the electronic fusion sounds of Ponty and the soulful urban tones of Noel Pointer. Carter absorbed their styles and transcribed their solos, but was still more focused on classical music. Then she attended a concert by Grappelli.

“Seeing someone live play, that’s what pushed me over the edge,” she says. “Just seeing how much freedom there was in the music, which is really what I wanted… and to see just how much fun they were having, that did it for me. I just decided then that I wanted to play jazz.”

Carter double-majored in jazz and classical studies at the New England Conservatory for two years before moving back to Detroit to attend Oakland University. She also absorbed everything she could from local jazz pillars Marcus Belgrave and Lyman Woodard.

Making the transition from classical to jazz required Carter to alter her technique significantly. She had to learn new ways of bowing the strings and lose most of her vibrato. “It’s like you’re doing everything backwards than you were in classical music,” she says. “And then just the lines, especially with bebop, all the string crossing is almost more like playing guitar.”

In 1987, Carter joined the highly touted all-female jazz quintet Straight Ahead — a Motor City–based unit that covered mostly mainstream jazz material. Carter earned a reputation as one of the group’s standout soloists. She appeared on two albums, Look Straight Ahead (1992) and Body and Soul (1993), which were well received — though the group was generally considered better live.

Carter moved to New York City in 1991 and for a couple of years played with the avant-garde String Trio of New York. There, she expanded her musical palette through studio work and exposure to a variety of musical styles, from jazz to hip-hop to country. By the mid-’90s, her resume listed gigs with such artists as Faith Evans, Mary J. Blige, Wynton Marsalis’ Jazz at Lincoln Center Orchestra and Oliver Lake. Her violin can also be heard on the Ken Burns Civil War series.

“I didn’t place myself in a category and say I was only going to play with these types of musicians or this kind of music,” Carter says. “I just took [anything] to get my name out there. Musically, I think it helped me as well.”

After leaving Straight Ahead in 1994, Carter embarked on a solo career. She released her self-titled debut disc the next year, followed by Something for Grace in ’97. Both albums, released on Atlantic Records, featured a combination of straightforward contemporary jazz and r&b/pop-influenced tracks. Because Carter used electronic instruments, many jazz purists — often called the jazz police — called the discs “smooth” and refused to give her a second look.

Carter disagrees with that assessment. “I used electric instruments, but I still did the same kind of concept that I do now,” she says. “I did some Billie Holiday with an acoustic thing, but then I wrote music that kind of represented what I grew up listening to: the Motown Sound, George Clinton and Funkadelic. I’m not ashamed of that music. That’s all great music.”

While some critics scoffed at Carter’s decision to approach her urban roots, the albums sold well and her concerts earned rave reviews. When she was between recording contracts in 1998, Carter performed consistently.

When Carter hooked up with Verve in 1999, the respected record label gave her third album, Rhythms of the Heart, the type of promotional push usually reserved for established jazz heavyweights. It paid off, making Carter one of those “overnight success” stories. Rhythms was more straight-ahead and acoustic than Carter’s previous outings, and soon she was the darling of the critics. By jazz standards, Rhythms was also a major commercial success, selling more than 30,000 units.

In 2000, Carter followed up with Motor City Moments, a tribute to the music she heard growing up in Detroit, featuring compositions from hometown jazz legends Milt Jackson and Thad Jones and Motown faves Marvin Gaye and Stevie Wonder. Carter swings hard, playing the blues with conviction and the ballads with tenderness, and jazzing up the r&b classics. Motor City also broke the 30,000 mark and solidified her status as one of jazz’s hottest commodities. Carter’s 2002 Grammy nomination was for Best Instrumental Jazz Solo on “Fragile,” from her collaborative Freefall CD with pianist Kenny Barron.

Next month, Carter will go into the studio and change pace once again. This time she’ll mine her oldest musical roots — classical. Carter has received permission to use Paganini’s “Cannon” violin on some of the pieces. The Guarneri model, famous for its dark sound and amazing projection, was once owned by the 19th-century virtuoso. The instrument is controlled by the city of Genova, Italy, and is infrequently played. Last December, Carter became the first jazz musician, and the first African-American to do so.

By constantly traversing genres, Carter has become a difficult musician to pin down. That suits her just fine, as she doesn’t care about labels and loves many styles of music. “Whatever I do, I think those influences are going to be in there,” she says, “and I don’t think I should have to deny any of that.”