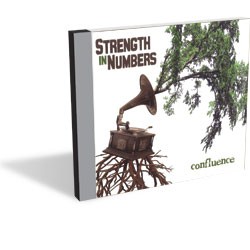 (Love For All Music, CD)

When a band releases its first full-length album, it’s typically on the uphill climb. Yet while Strength in Numbers, the Vermont octet of self-proclaimed “hip-poppers,” are rising quickly, they’re hardly at the top of their game. Yet. The traditional move for legitimacy — especially in Burlington’s fertile hip-hop and funk scenes — is to play as if your life depended on hitting it big. The ruse has worked work well for any number of bands in college towns for generations. But on Confluence Strength in Numbers take a more measured approach and prove to be too cool for school.

Confluence employs the same mellow hip-hop presented on last year’s debut EP, Less Is More, though this latest effort lacks that collection’s sense of earthy ire. Also absent is Montréal emcee Dali, leaving Emma Frank as the sole vocalist. What’s left is an octet centered on silky-smooth R&B grooves and exultant horn melodies. These grooves are so smooth, in fact, that you could almost mistake it for elevator jazz — if you were hardly listening.

Much of the album’s sleek tone comes from Frank. When she croons empowering lines such as “I’m not allowed to be hurt by you,” or profundities like “Someday I’ll be a figment of my own imagination,” she hardly sounds empowered or profound, but cool as hell. And it’s a cool she never really loses, even when the rest of the band gloriously goes wild, as on “Why Not.” Frank sings with the collected reserve of someone who has nothing to prove.

The other band members are more apt to let loose, but their compositions are sometimes too tenuously tasteful. When bandleader and rising sax maestro Bryan McNamara takes the rare solo, as on the superb slow jam “Drama Queen,” his notes emerge from his horn as naturally as breathing. Similarly, Bryson Barnes’ trumpet solo on “Born to Be Happy” is nestled back in the mix as if the band didn’t care enough to show it off. Too cool for school, indeed.

“AntiFantasy,” the album’s closer, is where Strength in Numbers indulge the most. Here, McNamara and Barnes don’t question themselves on fluttering melodies. Again, Frank’s airy singing gives the tune a trippy glow. “It’s time to go home,” she repeats over and over at the end of the song, suggesting the band wanted to pace the record like a live set.

But you hardly feel that kind of immediate energy on Confluence. Rather, Strength in Numbers sound self-assured on their sophomore outing. Such nonchalance could be disconcerting to some. But, like a fresh wine, Confluence gets better with age, revealing new layers with each listen and heightening anticipation for an eventual release. And you can rest assured knowing this: All the restraint going on here will surely explode on the stage.

Strength in Numbers play this Thursday at Club Metronome, and Friday at the Localfolk Smokehouse in Waitsfield.