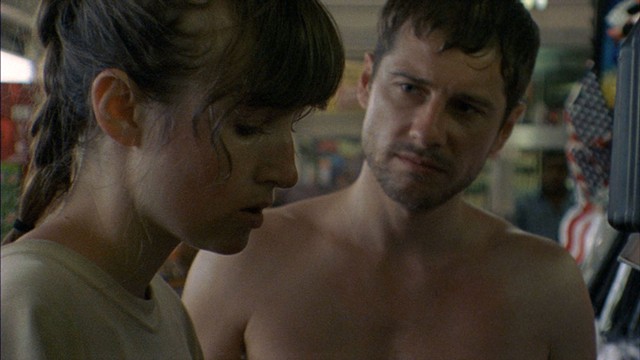 Our streaming entertainment options are overwhelming — and not always easy to sort through. Lately, I've been hearing major buzz about the paranoid thriller She Dies Tomorrow, the second film from writer-director Amy Seimetz, who's also a familiar face from her acting roles in Upstream Color, "Stranger Things" and more. While waiting for Seimetz's latest to land on one of my streaming platforms, I decided to see what was up with her 2012 debut feature, which shares two of its lead actors with She Dies Tomorrow.

Sun Don't Shine is currently available on Amazon Prime Video and Kanopy. The latter is a free streaming service you can access with your public library card — check it out!

Crystal (Kate Lyn Sheil) and Leo (Kentucker Audley) are a young couple on a road trip through rural Florida. But this is no vacation. When we meet them, they're in the midst of a vicious physical struggle, which ends with the destruction of Crystal's phone. "You choked me," Crystal whispers, but she gets back in the car.

As the pair continues down the highway, we gradually piece together the context. Let's just say something in the car trunk is starting to stink in the steamy heat of the Everglades.

Leo is well-meaning but not terribly bright; Crystal is tempestuous, possessive and shell-shocked. When it comes to trouble, these two are no pros, and it soon becomes clear they're in way over their heads.

Sun Don't Shine is a particular breed of noir: light on plot and heavy on mood, with desperate characters who repeatedly make the worst possible choices. For most of its run time, it's essentially a road movie about two sad, inarticulate people, and it only works because the atmosphere and the acting are superlatively done.

But it does work. From that first, context-free scene, Seimetz pulls us into the hothouse setting and the twisted symbiosis of the couple, using handheld camera work and extreme close-ups. The keening of insects, the hazy green foliage, the sun's glare — it all adds up to a powerful, almost hypnotic evocation of place, seductive and oppressive at once.

Weeki Wachee Springs, the tourist attraction where the couple eventually ends up, has a special seductive quality for Crystal. When she was young, her mom took her to see the famous underwater mermaid show there. Now she dreams of being a mermaid herself, able to escape to a subterranean refuge where the consequences of her actions can't touch her.

Some viewers may decry Crystal as a damsel in distress, given that she suffers from dissociation and whimsy and neediness and general irrationality — the antithesis of a "strong" female protagonist. But to reduce her to a misogynist caricature would be to discount Sheil's mesmerizing performance as someone who combines the qualities of victim and victimizer, loving mother and murderer, dreamer and impulse junkie.

While Leo is a fairly familiar noir patsy — given tremulous, realistic life by Audley — Crystal feels like an original creation. She's one sad piece of work, but it's hard not to feel terror and pity as the inevitable denouement rolls around. This is a movie that resolutely limits its focus to one small, grubby, all-too-mundane tragedy, but it sticks with you. And it certainly makes me excited to see Seimetz's sophomore effort.

Morvern Callar (2002; Amazon Prime Video, Kanopy): Sun Don't Shine is less a story of crime or violence than of the traumatized mental haze that follows. The acclaimed second feature from Lynne Ramsay (You Were Never Really Here) plumbs a similarly dissociated state, also from a female perspective: Samantha Morton plays a young Scottish woman who comes home one day to find her boyfriend has died by suicide.

Blue Ruin (2013; Netflix, rentable): This thriller from Jeremy Saulnier, about a vagrant on a desperate revenge quest, is one of my favorite kitchen-sink noirs. Like Sun Don't Shine, it takes place in a vividly depicted hardscrabble Southern setting.

Queen & Slim (2019; HBO Max): Romance on the road always makes for a steamy atmosphere, especially when the couple didn't set out to be partners in crime. A traffic stop on a first date leads to a cop's death and a bond of desperation for Daniel Kaluuya and Jodie Turner-Smith in this debut drama from music-video director Melina Matsoukas.