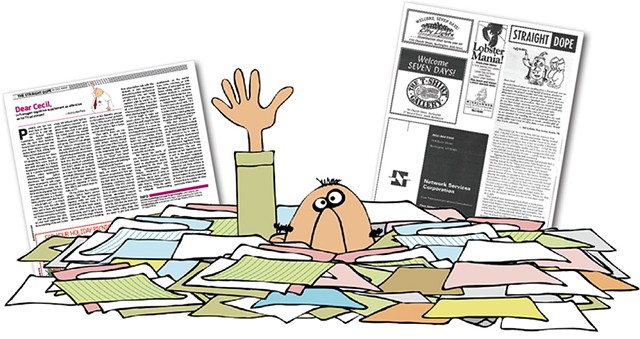 If you're one of the "teeming millions" who have enjoyed reading the Straight Dope weekly in Seven Days, we have sad news: The column in our June 27 issue was the last. We thought you might like to know why, along with a little history of the Straight Dope and its author, Cecil Adams.

Longtime Seven Days readers may know that we have carried the Straight Dope since the paper's first issue on September 6, 1995. It was one of three altweekly staples that we picked up and the only syndicated content, other than a few cartoons, in an otherwise Vermont-centric publication. (The other two features? Free Will Astrology by Rob Brezsny, still with us; and NewsQuirks, which ceased when author Roland Sweet died in 2015.)

The Straight Dope preceded Seven Days — by a lot. The first column was published in the then-2-year-old Chicago Reader on February 2, 1973. According to lore, a staffer at an editorial meeting pitched the idea of a column whose author knew everything and was never wrong. Readers would write in with questions, and the column's author, with the help of a few researchers, would get to the bottom of them. Mind you, this was well before the internet turned research into a series of clicks.

This was the Straight Dope's very first question:

Dear Cecil: Remember after the '68 Democratic convention a number of professional/academic associations cancelled plans for future conventions in Chicago because of what happened here. Did they follow through on their threats, and how much convention business has Chicago lost as a result?

The answer: probably not much. Or, as Adams put it with what would become his signature cheekiness:

God only knows what got these people so upset, but whatever it was, it seems to have blown over, since most of the associations involved have returned to Chicago since '68 or have future plans to do so. You can't really blame them — Chicago is an ideal convention site.

(Note to young readers who might be baffled: Look up "1968 Democratic National Convention." It can't hurt to learn something about rioting in the streets.)

Of course, there was more to Adams' response than that — information about specific organizations and their convention plans. You know, actual facts.

"And so infallible answer man Cecil Adams began fighting ignorance weekly in the Straight Dope," explained a 2011 Time Out Chicago article, "laying waste to the world's most puzzling questions with deep research set down in 800 words with enough acerbic wit, humor and clarity to make even the most snoozy science jargon a good read."

Needless to say, the idea took off. Adams and cohorts have subsequently written some 3,400 columns, answering questions that have ranged from the ridiculous to the seriously scientific to the existential. The Straight Dope has given the lie to the notion of "fake news" many times over.

After the internet was born and the good people at the Reader established a Straight Dope website, a veritable cult of information geeks arose around it. We're told the digital archive will live on and that the column might be resurrected in some as-yet-unknown fashion. Meantime, you can go to straightdope.com to find the answers to such burning questions as "Why do pigeons bob their heads?" and "How do they get the little Ms on M&M's?" And, for the royalty-obsessed, "A king's wife is a queen, so why is Elizabeth II's husband still only Prince Philip?"

As Adams writes in a sort of farewell letter on the site, "The Straight Dope homepage will continue to be updated with recycled classics. The Straight Dope Message Board (SDMB), the online community that has grown up around the column, will remain open for business."

Indeed, Adams notes, "in many ways the SDMB has become the heart and soul of the enterprise." Seven Days readers who have only known the print column may want to check it out, especially since the print version is no more. Adams certainly makes it sound inviting:

The SDMB is a raucous, wildly entertaining house party that has kept users coming back for 22 years — "like caramel-covered crack," as one user once put it. People participate not out of civic duty, but because it's fun. Part of what makes it fun is the arguments, which anyone can start on any subject. The SDMB offers a soapbox and an audience that routinely numbers in the thousands and occasionally in the millions.

"How many minds are changed as a result of these freewheeling symposia, I have no idea," Adams writes. "But surely there's value in having to defend your views in open debate, and in having cherished beliefs challenged."

You're probably thinking: Arguing with the passion of a truth seeker in the spirit of a house party? That's a thing?

Don't take our word for it. You don't have to live in Chicago to join that community.

But, since we're talking about truth, here's something you should know: Cecil Adams isn't real. The name is a pseudonym. Several people have served in the role of "the world's smartest human," but for quite a while it has been Straight Dope editor Ed Zotti. Discerning that answer was the objective of the aforementioned Time Out article. Even cornered for an interview, Zotti tried to keep up the ruse:

"People have a lot of theories," Zotti says with a smirk, painting himself as an errand boy for a genius. "I do much of Cecil's typing, but Cecil presides. I'm Cecil's editor, confidante and personal assistant. A couple of other assistants do some research and I do some research, and then Cecil gives it his magic touch and it somehow gets into the paper."

Whoever he is, Adams says in his letter that he's considering publishing another Straight Dope book: "It's been nigh on 20 years since the last one." Several Straight Dope books are out there, so he's probably referring to 1999's Triumph of the Straight Dope. No doubt all are great gifts for your trivia-loving friends and family.

Though we introduced a local question-and-answer column, Whiskey Tango Foxtrot, aka WTF, some years ago, we'll miss Cecil Adams for his smarts, wit and great writing. And we're sad that a factor in the column's demise was a steep attrition in subscribers — down to just 11 altweeklies, including Seven Days.

But, like other former print entities, Straight Dope will live online for ... ever? We'll have to write Cecil and ask that question.