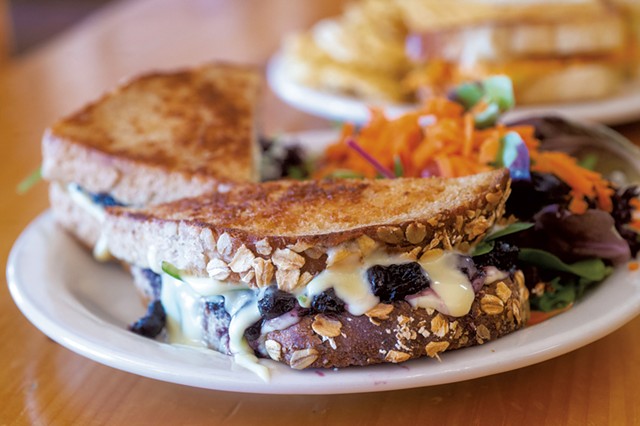 Until March 2020, the Round Hearth at Stowe was known as "Vermont's Most Famous Ski Dorm." Now, in its new life as the Blue Moon Vintage & Artisan Market and the Round Hearth Café, the large building just off Mountain Road has traded bunk beds and group trips for breakfast and grilled cheese.

After Grady and Merry Vigneau bought the Round Hearth in 1988, they restored the building and ran it as a youth dorm, hosting high school groups for ski trips and summer camps. Ali Vigneau was just 6 months old when her parents moved to Stowe from Boston to operate the business.

"While we were growing up, my siblings and I took turns working in the dish room and making beds," she said. "We all had our summer jobs here."

As adults, the four siblings took turns taking over the office work and general management of the family business from their parents. In recent years, though, interest in bunk-style dorm trips has waned, "for nobody's fault," Vigneau said. "Lift ticket prices went up, and it was not the unbelievably affordable trip it used to be, considering you're sleeping in a dorm with six or seven other kids in bunk beds."

In October 2019, the family decided to sell the building.

"It was heartbreaking," Vigneau said. "This had been our home for 30 years; this was where we grew up. But it was time to sell, and it was time to move on."

But shortly after Round Hearth went on the market, the COVID-19 pandemic hit and prevented interested buyers from viewing the building in person. Despite earlier interest, a sale seemed unlikely. The family contemplated their options: affordable housing, a boutique bed-and-breakfast, a massive house with 27 bedrooms?

Merry had the idea that stuck. "She was chatting with her best friend one night, and they had the idea of turning it into a café," Vigneau explained. "We had the existing kitchen space, we had the dining room, and we had our namesake indoor fire pit — the Round Hearth."

Vigneau thought it sounded "a little crazy," she said, but she was on board with her mom's idea. In addition to the café, they dreamed up an artists' market and ripped out the dorm's 150 bunk beds to create space for local vendors of crafts, art, antiques and vintage goods. They started renovating in July and opened the reimagined business in late August.

The café's menu is centered on a piece of equipment from the kitchen's dorm days: a flattop griddle on which some 150 pancakes were made every day. The Vigneaus weren't interested in operating a dinner restaurant; they just wanted to serve simple, fresh food featuring local ingredients. 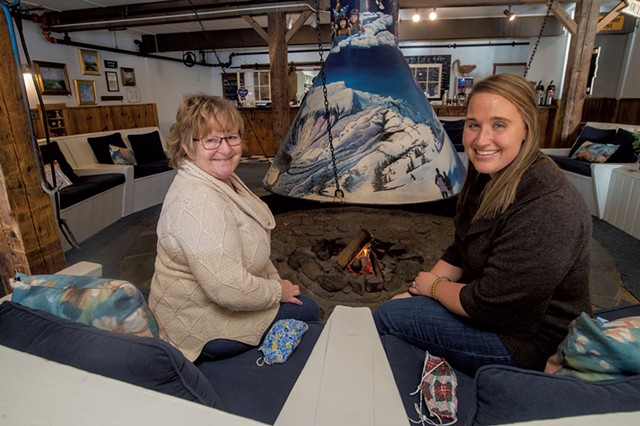 "We realized we could have a really good grilled cheese menu," Vigneau said. Merry researched, tested and tweaked recipes, and the family sampled platters of sandwiches at dinner, ranking their favorites. They landed on a selection of grilled sandwiches ranging from beets, goat cheese and arugula to roast beef.

At about the time the Vigneaus decided to start the café, two bakers approached them looking to rent commercial kitchen space. Shari Vermeulen now operates Shugah Cookie Baking in half of the Round Hearth's kitchen, which was expanded into the former staff rooms; she also bakes quiches and cookies for the café. Stowe Dough — the doughnut business that Maurizio Odermatt and Brandon Tindal launched this month — rents the other half.

The café will sell doughnuts each day, but customers can also order online directly from Stowe Dough for pickup at the Round Hearth.

"They're good partnerships," Vigneau said of the bakeries. "People come in for Shari's cookies, and they buy a coffee. Or they come in for breakfast and get a doughnut for dessert. It helps get people through the door."

As a dorm, the Round Hearth mostly catered to people from elsewhere. The new business model is a draw for locals, as well as skiers and tourists. "When we were pivoting, we knew we needed to keep the Round Hearth in the name somehow," Vigneau said. "It's got brand recognition, if you will, with everybody in town. They've driven by it for 30 years."

To connect with Stowe residents in the fall, the business offered a clever special. Vigneau asked everyone who came in how many years they'd lived in town without coming into the Round Hearth. Their numeric response was their discount.

I'm not a Stowe resident, and I didn't come from the mountain when I stopped in on a recent Monday, but I felt welcome around the hearth's crackling fire. Rather than order online or call ahead, I decided to place my takeout order in person at the café; while I waited, I browsed the goods of some of the market's 45 vendors and sat by the fire.

The café's namesake hearth is a real showpiece — it's the focal point of the large, open dining room and the first thing you see when you walk in. It features an appropriately wintry mountain scene, painted by artist and musician Jim Charonko.

"It's the most amazing piece of history in the whole building," Vigneau said of the hearth. "And it's the best ski-boot dryer in all of Vermont." 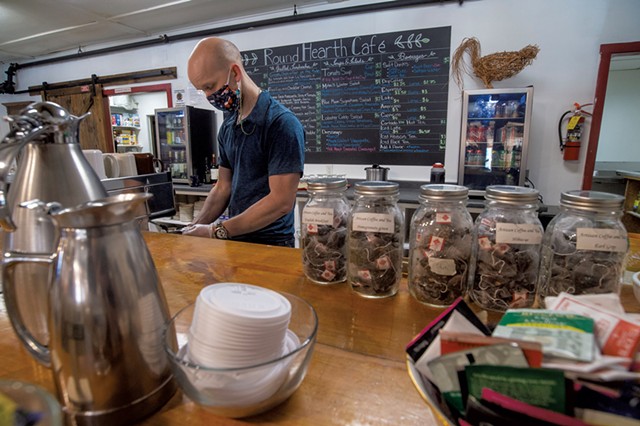 Since I'd stopped in for lunch, I chose a grilled sandwich of balsamic blueberries, spinach and Brie on honey-oat bread from Northfield's La Panciata bakery ($8). The sandwich came with a choice of salad, fruit or chips; I opted for greens topped with apple cider vinaigrette. My husband ordered a Buffalo chicken sandwich on La Panciata's pane Siciliano ($9), and greens with Parmesan vinaigrette.

Both sandwiches were stuffed. I was blown away by the quantity of blueberries stacked between the griddled slices of bread on mine — the melty Brie held everything together. The flavors were delightfully balanced, and a pop of acidity from the blueberries cut through the richness of the cheese.

The sandwiches were sturdy, too, holding up well in their compostable takeout boxes until we reached our dining destination. I stole a bite of the Buffalo chicken, which had a just-right degree of tingle.

For customers looking to dine on-site, the Round Hearth has plenty of seats in its spacious dining room. The Vigneaus also recently added private dining rooms upstairs, which can be reserved online. The kitchen closes daily at 2 p.m., but an après-ski menu with snacks, beer and wine is available until 5 p.m.

On Saturday and Sunday from 7 to 9 a.m., the café slings breakfast sandwiches and hot coffee from an express walk-up window — convenient for skiers on their way to the mountain. The Black Diamond has one egg, the Double Black Diamond has two, and so on.

The Vigneaus are still adapting the space and developing their new business model; they're planning to add vendors to the artists' market, host a jazz brunch with nonprofit event producer Stowe Vibrancy, and create grab-and-go dinners. And those are just a few of the ideas on the table.

"There's no going back to bunk beds," Vigneau said. "We have loved the opportunity to open up our home, and we're glad we found a business model that lets us keep it."