Since Piecemeal Pies opened in White River Junction in 2016, it has built a stellar reputation for its singular Vermont take on the British meat pie. The restaurant's squat, golden-domed pies boast classic, sturdy hot-water crusts while being executed with more creativity and far less stodge than is typical of English pub grub.

Piecemeal's rotating pie list ($13 to $15) runs the gamut from the best-selling rabbit and bacon to the not-at-all-traditional spinach, kale and feta. All meats are raised on Vermont farms, and many other ingredients are locally sourced. Each pie makes a satisfying meal, especially when ordered as a "full English" (an additional $6.75) with parsnip-potato mash, rich rabbit-cider gravy, and indulgently butter-drenched peas gilded with fresh mint and silken braised leeks.

From my first taste of Piecemeal Pies' menu, shortly after it opened, I have been a fan, though mostly wistfully and from afar. So I was thrilled in February 2020 when the business' co-owners and partners, chef Justin Barrett, 39, and Josh Brown, 37, announced their plan to expand to Stowe, bringing exemplary pies and dreamy peas closer to me.

Things took a little longer than hoped — thanks to, you know, a global pandemic — but in late July, Piecemeal Pies opened at 112 Main Street in the heart of the village. Over the weekend, after a few months of serving during daytime hours, the Stowe spot added Sunday and Monday dinner.

The lull between leaf peepers and winter visitors allows the team to ease into the new restaurant's extended hours and welcome more locals, Barrett said. Monday will be billed as "Vermonter Day," with a pie and pint deal for $20.

"We didn't build this just for the tourists," Barrett said.

Out-of-state customers did play a key role in the choice of Piecemeal Pies' second location, though. Many hopped off the highway to hit the original location on their way to or from the ski resort, Barrett recalled, and said, "Oh, you really should be up in Stowe."

Another contributor to the decision was the team's success vending at Stowe's annual British Invasion car show. "We would sell over 100 pies in an hour," he marveled. 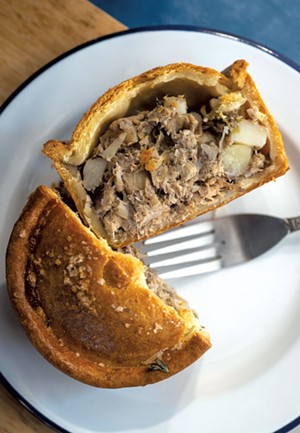 The expansion was powered by a successful crowdfunding effort that raised $125,000 from more than 100 people, some of whom invested as little as $100, Barrett said. The major renovation of two floors of the Main Street building, formerly occupied by an ice cream shop and a barber, created a brand-new production kitchen; a room anchored by the ordering counter and display case; and a bright, stylish dining area that seats about two dozen.

Barrett was an architect before he became a cook, and that training has been useful in his restaurant career. Before moving to Vermont in 2010, he designed a restaurant in Manhattan and one in Maine.

"Everything should be like an experience, from the minute you walk through the door," Barrett said.

The Stowe space showcases his design chops, from the striking Hygge & West bathroom wallpapers to the sleek, marine blue banquette seating and natural pine beams in the dining area. "It gives you a happy vibe," one of my dining companions said on a recent daytime visit, surveying the light- and plant-filled room.

The food also contributed to the mood. Our foursome tucked into three distinctly different and delicious pies: curried lamb ($15); mushroom, roasted garlic and Parmesan ($13); and beef, mushroom and blue cheese ($14). The last one, Barrett explained, is inspired by his perfect burger combo.

The fourth person in our party chose one of the menu's smaller items: a half-moon-shaped pasty, or turnover, filled with creamy smoked salmon generously seasoned with dill ($9).

The restaurant's bakers also produce a daily assortment of scones, quiches, breakfast pastries and cookies. Despite being more than satiated, we managed to finish two large, excellent cookies ($4.35 each): a chewy, candied-ginger-studded molasses ginger and a lacy, crunchy oatmeal-currant cookie, which happened to be gluten-free.

I'm plotting an evening visit soon for a pie, a pint and some peas.