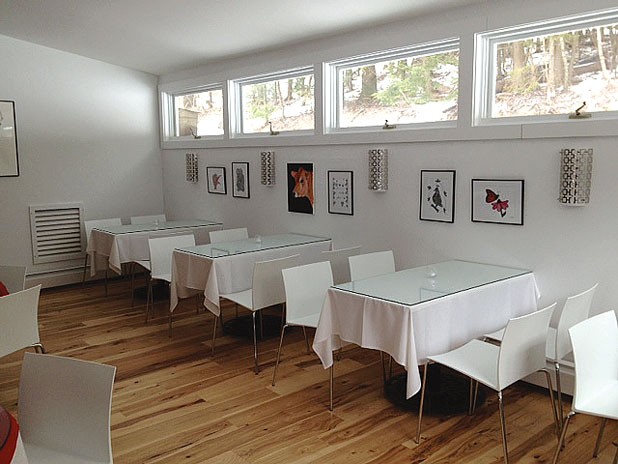 When new owners took over the Mountain Road Resort in Stowe in 2007, it was “just before the world ended,” as co-partner Eben Burr puts it. He’s referring to the financial collapse the following year that, for them, almost resulted in a foreclosure on the property — which comprises a pair of buildings with 31 guest rooms between them, several smaller buildings and 16 acres of woods filled with trails. “We bought it back [from the bank] in 2011,” Burr says with a look of satisfaction.

No wonder he’s pleased. This wasn’t just any long-distance real estate deal — though the partners do live in New York City. For Burr, 41 — the creative director in the project — the renovation of the resort has a twofold goal: to “bring some modernism back to Vermont,” he says of the midcentury buildings being refurbished; and to create “an art hotel.” Both aims are already being realized, though the proprietors will hold off on a grand reopening until all the rooms are completely redecorated — probably this spring. Meanwhile, Burr has transformed even the rooms that still sport dainty vintage wallpaper by adding multiple pieces of original art, as well as new beds and carpeting.

His objective, Burr explains, is to fill every room with contemporary art — so far, primarily by artists he knows in New York, though he’s “more than open” to connecting with Vermont artists. Everything is for sale: If a guest at the resort seeks to buy a work, Burr will connect the patron directly with the artist. “The artists get all the proceeds from the sale,” he says, noting the work ranges widely in price, from about $100 to $9000. When a work is sold, the artist replaces it with another, thus ensuring a steady flow of new pieces for Burr and, potentially, more income for the artist. It’s a tidy and sustainable loop.

Besides potential sales, artists get another perk from the deal: “We are trading artists a piece of work for a stay at the hotel,” Burr says. “It’s an unusual exchange that has attracted the attention of many amazing artists, some of whom are in the permanent collection of the Museum of Modern Art, the National Gallery of Art, the Corcoran [Gallery of Art] and the Whitney [Museum of American Art].” He believes that Mountain Road Resort has the largest non-museum collection of “emerging and mid-career artists on display anywhere in the United States.” Nearly 70 are listed on the hotel’s website, with links to the artists’ own.

It’s an eclectic collection, to be sure. Burr has an eye for uniquely compelling pieces, and transports them personally from New York to Vermont. Though all the work can be called contemporary, and most is two-dimensional, no particular style or medium reigns supreme here. There are color and black-and-white photographs, figurative and abstract paintings, screen-prints, collages and more. Some of the artists are well known; others are beginning their careers. All of them are quite good.

Then there is the odd, not-for-sale bit of lodge kitsch, such as the mounted bear head — and paws! — over the bar. It was a gift from a contractor, Burr explains. Those paws were apparently, and creepily, meant to hold a rifle; now they proffer a magnum of champagne.

The moment you step inside the Mountain Road Resort, it’s apparent that Burr eschews the “ye olde” New England aesthetic. Just off the registration area — which offers a tantalizing plate of homemade cookies — a light, high-ceilinged great room beckons. An enormous hearth with a crackling (gas) fire anchors one side of the room, a bank of tall windows the other. Handsome, contemporary couches and chairs are arranged companionably, and a lot of artwork adorns the white walls. A pristine, all-white breakfast room is around the corner, just past the small bar.

When Burr gives a tour of the space and some of the guest rooms on a recent afternoon, it quickly becomes clear that he loves telling the stories behind the art as much as he enjoys the art itself. And every piece does have a story — about the artist’s life, or how Burr met him or her, or what speaks to him about the work. “It’s kind of fun to have the collection be at my whim,” he says with a smile. “But there’s nothing too sexual or violent here — it is a hotel.”

Burr himself cuts a stylish figure: Tall and slim, he’s nattily dressed, from the hipster shoes to the dandyish vest and tie to the cream-colored Kangol cap atop his close-cropped brown hair. Now working in boutique real estate and financial marketing in New York City, Burr is a native of Washington, D.C. He played guitar in punk bands — part of the indie scene that grew up around Dischord Records — before earning degrees in industrial design. In 2001, he bought and designed a nightclub, Luxx, in the Williamsburg neighborhood of Brooklyn, then sold it a couple years later. Now Burr comes home from his Manhattan job to his wife and 2-year-old son, and builds furniture — a bed, some bookshelves — “for fun,” he says. Surprisingly, he’s also “a dessert nut” who loves both making and eating them. “Baking is my passion,” Burr reveals.

In Vermont, he puts his design savvy to work at the Mountain Road Resort. Burr is looking forward to finishing all the guest rooms, as well as an adjacent building that will become a yoga studio. “In the spring we’re going to start having events,” he says. “I can’t wait for that.

“What this hotel has to offer the most is being in Vermont,” Burr adds. “If we can offer something different with the art, and it’s always changing, we’ll have accomplished what we set out to do.”