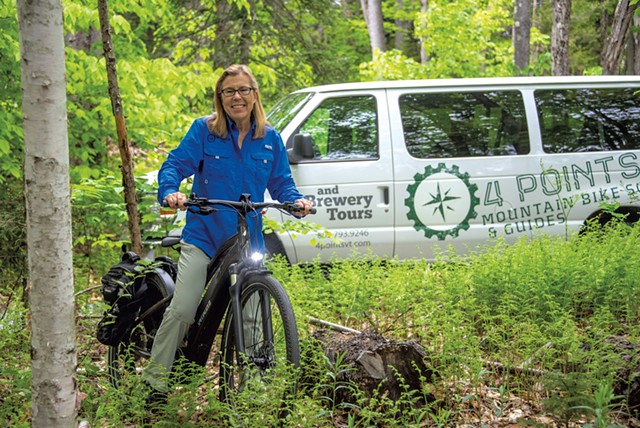 According to tour guide Rick Sokoloff, there are four things to keep in mind when carving up the woods on a mountain bike: Stand up often, keep feet level to the ground when not pedaling, cover the brakes at all times and keep your eyes on the trail ahead. The name of his tour company, 4 Points Vermont, refers to those tenets — and the four cardinal directions, which the compass rose in his logo implies.

A fifth tenet could easily be added: Chill out post-ride with a good craft beer. Sokoloff, a longtime Stowe resident, offers mountain bike and brewery tours through 4 Points. He and a team of well-informed guides take groups on excursions through the mountainous region's craft breweries, cideries and distilleries. Sokoloff also runs mountain bike clinics to teach riders some skills before taking them out on trails.

Once the booze starts flowing, the bikes are locked up in a tow trailer. tweet this

Primarily aimed at tourists, 4 Points tours are often booked by bachelor or bachelorette parties and corporate groups, but people of all kinds sign up. For $99 per head for groups of 14 or fewer, bikers and drinkers get an insider's perspective on the vast array of trails and alcoholic beverages found in and around Stowe.

Sokoloff has been a professional tour guide and mountain bike and ski instructor for decades.

"Have I ever done anything professionally?" he said jokingly to his Swedish American wife, Marina Meerburg, during a recent drive through Stowe. She and Sokoloff met in the 1980s in Bad Gastein, Austria, a resort town where they both worked in the ski industry. A longtime translator, Meerburg also leads tours as a 4 Points guide. She said the only tours she doesn't do are bachelor parties.

"I don't want them to feel like their mother is there, right?" she said.

In the early 2000s, Sokoloff cofounded the Stowe Mountain Bike Club, which has since become the Stowe Trails Partnership. He also sat on the board of the Vermont Mountain Bike Association. He's offered mountain bike lessons for nine years and estimates he's taught more than 1,000 people the sport.

The upcoming season is Sokoloff's eighth doing brewery tours. He combines wheels with beers in his bike-and-brew tours. But some people have misconceptions about that.

"They think you're gonna ride a mountain bike to [each of] the breweries, which would be a really bad idea," Sokoloff said.

Instead, the day starts on Stowe's network of mountain bike trails. Groups do ride to the first brewery, but once the booze starts flowing, the bikes are locked up in a tow trailer and carted from place to place. Sokoloff takes alcohol safety seriously and requires that tour-goers sign a waiver at the start of the day stating they understand the risks.

A newer offering, Sokoloff's bike-and-brew tours aren't as popular as his brewery tours.

"The barrier to riding a mountain bike is higher than it is to drink beer," he quipped.

But it's not an impossible barrier. George Lewis, innkeeper at Stowe's Brass Lantern Inn, said he was an experienced road biker but had never tried mountain biking before taking lessons from Sokoloff.

"There's a technical ability that you need to have to be safe and enjoy it," Lewis, 61, said. But after a day at the Trapp Family Lodge, where Sokoloff holds his clinics, Lewis was ready to ride the trails.

Sokoloff can adapt lessons for each individual, Lewis continued: "He looks at the person and can figure out what their abilities are and then modify his teaching." 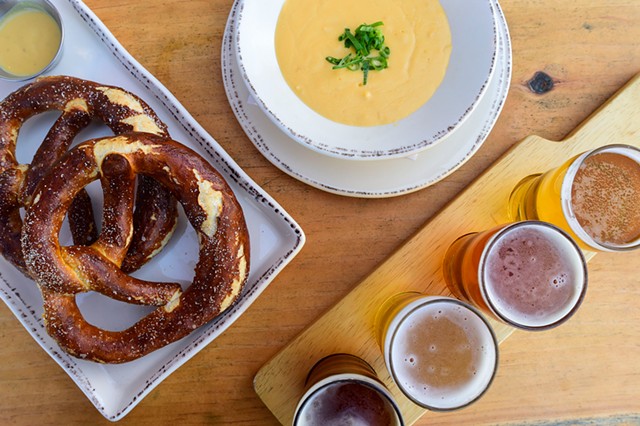 4 Points tours are similarly customizable. Before planning, Sokoloff asks his clients what their tastes are. Beer drinkers are the easiest to please, but not everyone drinks beer, he pointed out, and some people have special diets or food allergies. Most producers on a 4 Points tour will have some kind of alternative, such as the housemade hard seltzers at Rock Art Brewery in Morrisville.

"We tailor it to their taste," Meerburg said.

In fact, 4 Points will work with potential clients to craft nearly any kind of tour they want, though that raises the fee. Want to see covered bridges and waterfalls? Sokoloff will make it happen.

A typical 4 Points brew tour hits places such as the Alchemist, Green Mountain Distillers, Ten Bends Beer, Stowe Cider, Idletyme Brewing, von Trapp Brewing Bierhall and Hill Farmstead Brewery — though that last one, in Greensboro, is a bit farther off the Stowe circuit and often has long lines.

Sokoloff takes care of everything for his clients. He picks them up and drops them off with one of his tour vehicles, including a brand-new 14-passenger Ford Transit. He alerts the hosts of each stop on the tour before they arrive, which helps them prepare for the guests. Many places offer flights, which can include up to eight small glasses of beer. Those take time to pour, especially if there are as many as 14 people waiting to toss them back.

Recently, Sokoloff took his team members out on a brew tour to get them prepped for the summer season. At each stop, he shared factoids about the various breweries, including info on their ingredients, machinery and processes. 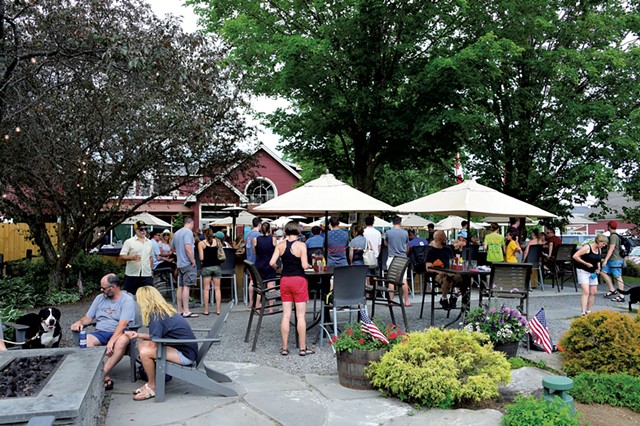 4 Points tours will put a little bit of food in each client's belly, but not a full meal or even a full appetizer. At Idletyme, Sokoloff ordered up a few small plates for the group to share. He makes sure his clients have dinner plans worked out ahead of time so they don't have to scramble after a long day of drinking. He'll drive people to restaurants, recommend caterers and even drop them by the grocery store.

Sokoloff recently acquired a fleet of e-bikes. Those can't go on the mountain trails, he noted. Instead, they're for gravel road tours. Sokoloff said he has an eye on some wineries in the Champlain Islands, which bikers would reach via the Colchester Causeway.

Though Sokoloff and his guides are highly knowledgeable, they aren't the focus of a 4 Points tour. Instead, they prioritize their customers' fun and satisfaction. Sometimes that means letting their guests take center stage, especially if they know a lot about beer.

"Let them show how smart they are," Sokoloff said. "People love that. We don't need to be the experts. We're here to show them a good time."