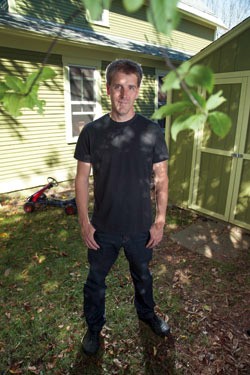 The origins of storytelling are as ancient as humankind itself, and if that conjures up images of cavemen grunting around a fireside, you’re probably not too far off. Telling stories is a fundamental mode of human communication, and one of our chief means for understanding the world. It’s that fundamentally human urge that StoryhackVT will tap into at the Vermont Tech Jam this weekend.

The “hack” in the group’s name is a tip of the hat to the “hackathon,” a competitive event in which computer programmers are given a short window of time in which to collaboratively develop a software solution to a specific problem. In a storyhack, teams of storytellers collaborate to create original narratives, which are then entered into competition. StoryhackVT is Vermont’s first such event, and its focus is pointedly technological. The competing teams must concoct not just a story, but a story that must be told across no fewer than three different digital platforms.

“There’s a lot of talent in the Vermont area that already works in digital media,” says StoryhackVT founder Nate Herzog, 40. “We really wanted to showcase those people’s creative portfolios, [and provide] a platform on which they could stand and push their creative talents to the limits, and share that with the rest of the world.”

Participants will be challenged on multiple fronts. Not only will their stories have to span three digital media, they must be created from scratch within 24 hours. And they’ll have to incorporate, in some creative way, the specific theme of the contest, which will be announced only moments before competition begins.

“There’s something kind of cool about a deadline,” says Herzog. “I’ve always liked that model. Focused creativity and productivity can turn out some really interesting ideas.”

The general public will determine just how interesting those ideas are. Twenty-four hours after the event starts, teams’ stories will be available, in one form or another, on storyhackvt.com, where they will be open to judging by anyone who visits the site. The site will also host live streams of the competition, and will link to a YouTube page that will serve as a digital archive of the event. Voting tallies will be posted live, as well.

While the origins of storytelling are decidedly low- or no-tech, digital technology affords storytellers a rich and ever-changing array of storytelling opportunities — thus StoryhackVT’s affiliation with Vermont Tech Jam (organized by Seven Days). From a narrative point of view, digital video is not appreciably different from the analog medium of film. Certain digital media, however, offer storytellers varying degrees of interactivity and complexity that have the potential to alter the nature of storytelling itself.

Herzog points to the narrative achievements of “transmedia” works such as the innovative alternate reality game I Love Bees, which was both a stand-alone experience and a promotion for the 2004 video game Halo 2; and to the dizzying array of texts, games, websites, apps and various other digital ephemera that was produced to enrich the “universe” of the cult TV series “Lost.”

Herzog acknowledges the influence of surrealist party games such as Exquisite Corpse, in which multiple participants create a collaborative artwork, often guided by simple rules or guidelines. The Montréal-based KINO movement — which kicked off a wave of collaborative, 24-hour video-making contests — was also a source of inspiration.

Local resident Allan Nicholls, 68, a veteran of the film and television industries, is a member of a five-person StoryhackVT team called Kosmoplastique. He describes himself as “technically challenged,” but nevertheless jumped at the opportunity to collaborate with “some pretty cool minds.” Nicholls, who once worked for “Saturday Night Live,” says that StoryhackVT reminds him of having to create that show’s “cold opens” in the 24 hours before the show aired live.

He believes that the act of storytelling is “cathartic — to get something out of your system and into someone else’s system. There’s some romance in that.” He and his teammates have met to discuss their relative strengths and weaknesses, as well as strategies for dealing with the sleeplessness that the contest will likely produce. “We’ll need the right mixture of alcohol and caffeine, I guess,” he says.

Herzog hopes that StoryhackVT will not only produce some engaging multimedia stories, but that it will inspire local residents to tap into both their creative and entrepreneurial potential. Participants will be encouraged to develop marketing strategies for their stories — a reflection of the fact that digital media would not be growing so rapidly if they were not nourished by narrative content of all kinds.

“There are a lot of media out there that could stand to be reexamined,” Herzog says. “An event like this gives creative people the chance to do just that.”