Thanks to the Moth, live storytelling performances abound in Vermont 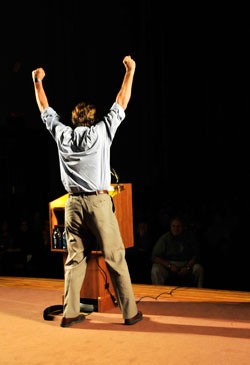 When Tom Boone took the stage at the Vermont College of Fine Arts Saturday night, it wasn’t to sing, dance or play music. Boone, a recent University of Vermont grad, stood behind a lectern and a microphone, bathed in stage lights, and told a true story. And the 300-odd people in the audience listened.

Boone, a slim, soft-spoken 23-year-old, recounted the time he went to visit his sister in Venice. After missing his flight from Paris to Rome, Boone finally landed in Italy and boarded a train. Shortly after he took his seat, Boone told the crowd, a female conductor with a terrible mullet grabbed his rucksack and chucked it out the door of the moving train. She bade Boone to follow suit.

Off the train he jumped, bewildered and alone in a country where he didn’t speak the language. The audience at VCFA was transfixed.

It’s something new to see so many people forgoing a Saturday night movie or dinner out or a few drinks at the bar to listen to amateurs — their friends, family and fellow community members — tell stories. But in the last six months, live storytelling events have multiplied in our region, popping up in Burlington, Montpelier, Waitsfield and at Middlebury College. They take place at churches, bars and dance studios. There’s never been a shortage of stories, but it’s new to see so many events showcasing this ancient human craft.

We have the Moth to thank for that. Since 1997, the nonprofit organization based in New York City has been hosting live storytelling performances around the country. While Moth stories vary in length, they must always be performed without the benefit of notes. Often, the tales are prompted by a theme — revenge, loss, disaster, to name a few. Notable storytellers have included writer Malcolm Gladwell, director Mira Nair and actor Ethan Hawke.

In 2009, National Public Radio began broadcasting “The Moth Radio Hour,” featuring highlights from the franchise’s various programs. Podcasts from the Moth shows are consistently among the most popular on iTunes.

Since the Moth began, similar performance groups have proliferated around the country. SpeakeasyDC in Washington, D.C., the Monti in Chapel Hill/Durham, N.C., and massmouth in Boston are a few such organizations devoted to the art of tale telling.

Northern and central Vermont now boast at least five dedicated storytelling events. One is Extempo, which is held every other month at the Black Door Bar and Bistro in Montpelier, and hosted by Jen Dole, a self-styled “underemployed impresario” who is a stickler for rules.

Dole began producing Extempo after she read an article in the New York Times about how the Moth had been taken over by famous writers and performers and was no longer a venue for amateurs. She liked the idea of storytelling performance and thought it would be well received in Montpelier.

“It made sense that the Moth was co-opted,” Dole says. “But it’s never going to be in danger of being overrun by famous people here.”

Extempo, run as a competition, works like this: Each participant has five minutes in which to tell a story on any topic. Dole prefers not to hem performers in with prompts — themes can feel “exclusionary,” she says. A jury of audience members decides which story is the best. Points are deducted if the storyteller exceeds the allotted time. There are no “prizes,” but recordings of the top three stories are published on the event’s website.

For Dole, the allure of live storytelling is simple. “I think it’s our natural human inheritance of narrative. As people, we come by that really honestly,” she says.

Brooke Dooley started Anecdote, a monthly storytelling night at the 1/2 Lounge in Burlington. She says the appeal is about communicating with other people. Because of the explosion of online social media, we have more contacts, but the depth of communication isn’t the same, Dooley posits. Electronic interaction doesn’t feel as authentic.

“There’s something lacking now,” Dooley says. “You need to feel like you’re part of a herd. That’s why storytelling is comforting.”

Dooley’s love of stories is rooted in her Irish heritage. In her family, people were judged by the quality of their stories, she says. Her father, a motorcycle-riding Vietnam veteran, often comes to Anecdote to tell a tale or two.

Unlike Extempo, Anecdote isn’t a competition but an open-mic event based on a theme — work, travel, celebrity encounters, et cetera. Participants, many of whom are regulars, are asked to keep their stories under seven minutes, but few do. Dooley, who serves as host, allows overages as long as everyone who wants to tell a story can.

Not surprisingly, Burlington is home to a handful of other live storytelling events. Recille Hamrell hosts a story slam at the Unitarian Universalist Society on Pearl Street, and local comedian and state legislator Jason Lorber recently started RealityFix, a similar event held monthly at the North End Studio. Lorber has also served as emcee for Lost Nation Theater’s Story Slam, which follows some of its productions.

Rather than using an open-mic format like Extempo and Anecdote, Lorber tries to make RealityFix more “like a show” by doing some interstitial gabbing between stories. He specifies a theme, and RealityFix’s audience awards prizes to the top stories.

Like Dooley, Lorber thinks the recent interest in storytelling stems from the need for connection. “There’s something magical about hearing other people’s stories,” he says.

Brent Björkman, folklorist and executive director of the Vermont Folklife Center, says he’s heartened to see storytelling once again becoming a form of popular entertainment. While the stories told at these events aren’t academic ethnographies or traditional folklore, they are still an important part of what he calls an “emergent folk culture.” Plus, says Björkman, stories help people come together.

“We love listening to other people’s truths,” he says. “People love the inside story. Storytelling is about being led into those back spaces.”

Public interest in “those back spaces” is what prompted the Vermont College of Fine Arts to host a Moth-like event of its own. Peter Nielsen, VCFA’s executive director of institutional advancement, wanted a way to further the college’s educational mission while keeping its community focus. A storytelling evening seemed like a perfect fit.

With help from the Vermont Humanities Council and Vermont Public Radio — which recorded the stories for later broadcast — the VCFA invited the community to hear and tell stories. Ten storytellers — five from the community and five from the college — were picked from a hat — though, to an observer, more than a couple felt like ringers.

The stories varied widely in polish and in theme. Ann Hagman Cardinal, director of marketing and admissions at the VCFA, told a story about smuggling her mother’s ashes into Italy. Terry Allen, a freelance writer from Montpelier, recalled summoning the New York City Fire Department to rescue a pigeon. Thomas Christopher Greene, VCFA president, recounted scrambling up a library book-return shoot to impress a girl.

Based on the success of the evening, Nielsen is hoping to lure the Moth into producing one of its traveling shows at the college. “This is a trial run to get them to come up,” he says. “And it helps raise the profile of storytelling.”

Tom Boone finished his story with a twist. After he landed on the train platform at an unknown station in the Italian countryside, he looked down the tracks, not sure what to do. Ahead of him, Boone saw a familiar face. It was a girl he had gone to school with in Arizona. She was studying abroad and headed to Venice as well. She gave him a kiss on the cheek and said, “Isn’t this lucky?”

Jen Dole, of Montpelier, tells a story at a recent Anecdote of meeting Clint Eastwood while dancing at a club in California.

Lauren Ober tells a story at a recent Anecdote of the time Rachael Ray asked for her number.