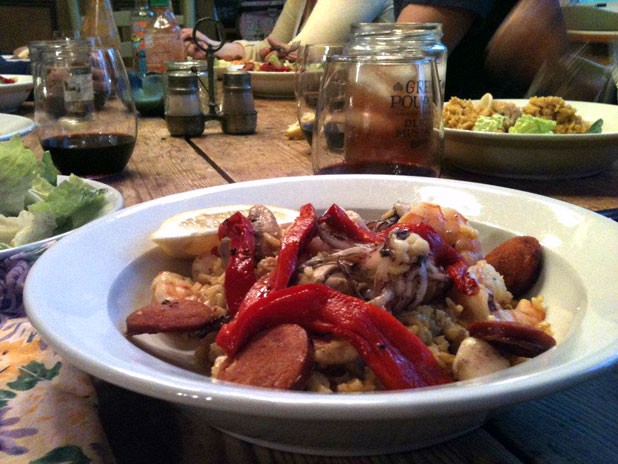 They had been filled and arranged by volunteers as a preemptive measure against Hurricane Sandy, the “superstorm” with the bouncy name that was predicted to reach Vermont the following day.

It had been just over a year since another storm, Irene, swelled the Mad River so violently that it inundated downtown Waitsfield and shoved a neighboring building into the side of 40 Bridge. One business in the complex, local favorite the Green Cup Café, closed in the wake of the storm and never reopened.

The sandbags were a not-so-subtle reminder that a lot was again at stake here: In the months since Irene, the Gulisano family, which owns the riverside building, had artfully renovated it back into a hub for food businesses. In the back, a bakery and ice cream parlor called the Sweet Spot had opened; in the front, a shingle appeared this summer for Peasant, an Italian eatery oriented toward Mediterranean comfort food. (Later this month, a butcher will join them.)

Peasant’s chef, Chris Alberti, is a transplanted New Yorker who spent decades as an enthusiastic eater in some of the city’s best restaurants, Raoul’s Restaurant and Lupa Osteria Romana among them. He also had experience replicating some of those dishes for an expanding family: his wife, Mary Ellen, and their five kids. A bracing experience on September 11, 2001, motivated the family’s move to Vermont later that year: A broker at the time, Alberti walked out of the World Trade Center 15 minutes before the first plane hit. Though he commuted to the city for work for a few more years, he also put down roots in Vermont, literally, when he planted his 3-acre East Warren Vineyard.

The Albertis now sell their grapes to North Branch Vineyards in Montpelier, where winemaker John McCann presses, ferments, ages and bottles them. Given Alberti’s deepening love of, and engagement with, food and wine, running his own restaurant was a natural next step.

Walking past the sandbags to enter Peasant, diners couldn’t help fearing another crippling storm. Alberti had a contingency plan to close on Monday if the storm knocked out power (Peasant is usually open for dinner Thursdays through Mondays), and he had already scheduled a two-week stick-season break starting on November 1. Knowing this meal might be the eatery’s last hurrah for a while lent the evening a particular poignancy, at least for visitors.

The chef himself, meanwhile, was rolling with the punches. Alberti, who calls himself an “amateur climate guy,” said he was convinced the storm would keep to the south. With that in mind, he simply donned his whites and began cooking for another Sunday-night service.

Once you walk through Peasant’s door, dark thoughts tend to dissipate. The blood-red interior is warm and enveloping, like a friend’s dining room; the walls are covered with kinetic, colorful paintings, and the room is theatrically lit by tiny votives, a funky chandelier and ceiling sconces. Savory and garlicky aromas emerge from the kitchen. A few of the wooden tables occupy their own little nooks; atop ours, beside one of the broad windows, stood a vintage-looking metal lamp. (A separate room in the back, painted a rich gray-green, is home to the bar and a few more tables.)

The warmth extends to the staffers, who are attentive and personable without being intrusive. At one point, Alberti emerged from the kitchen to ask diners about their meals, and a server often stood at a station in the center of the dining room, casually glancing at diners.

Peasant models itself on the cuisines of rural Tuscany and France, two regions where menus can be short — as in, one or two items. While not that skimpy, Peasant’s menu is certainly succinct: three starters, three salads, two pastas, four entrées and three desserts, augmented by one or two daily specials written on a chalkboard near the front door. Yet it was surprisingly difficult to choose among what all sounded like delectable, fully realized dishes, from Tuscan meatballs to pan-roasted salmon to pork osso buco, the night’s special.

Easier was finding something to drink on the eclectic wine list. Since one of the two East Warren wines on the menu — the Frontenac Gris — was tapped out that evening, my friend and I settled in with glasses of Nebbiolo and Chardonnay, respectively.

We didn’t have to wait long after ordering: The food arrived at a snappy pace, with the advance guard a basket of warm, crusty, almost nutty Red Hen bread. It was so addictive that we practically polished off the entire portion before diving into a bowl of fagioli e scarola, a soup so flavorful we found it hard to believe that it was totally vegetarian. Big, floppy ears of escarole mingled with a few stock-soaked cannellini beans, and, while we would have liked a few more beans, we theorized that some had been puréed to lend the soup its milky color.

Another starter was the soup’s polar opposite: a graceful tangle of shrimp and calamari tendrils tossed with sweet curls of fennel, dusted with fresh herbs and kissed by a lemony dressing. I almost licked the last bits off the plate.

This was the brightest dish we would see. As the night wore on, the fare became richer, darker, more cosseting — meats, cheese sauces, braises and roasts befitting Peasant’s comfort-food ethos. With a pungent aroma, a plate of tagliatelle announced itself before it arrived. The gorgonzola sauce itself was tangy, but milder than it smelled: a silky-but-rich veil of cream grounded by earthy mushrooms, with vital acidity added by a dollop of sun-dried-tomato coulis on top.

We split the pasta, and by then we were perfectly sated. So the appearance of our entrées in two ramekins elicited a momentary pause as we braced ourselves for more. One contained braised beef from nearby Gaylord Farm over lentils; the other, cassoulet.

While the dishes at Peasant aren’t as photogenic as the setting, many reminded us of something an Italian aunt might serve: unfussy, belly filling, aggressive in weight. Such were the main events. The beef was meltingly tender, almost falling apart in a midnight-dark stock-and-wine sauce, tiny shards of rosemary adding woody notes to each bite. The cassoulet was an uneven mound of sliced sweet Italian sausage and hunks of chicken and pork in an ever-so-slightly sweet, tomato-based sauce, layered with onions, carrots and cannellini. Though it had soft edges, the stew felt as if it might benefit from a heartier dollop of fat or even more time in the pot; the separate parts didn’t quite gel, leaving the dish somehow disjointed. But it was still good enough to make us eat at least half before admitting defeat.

Needless to say, we had no room for the poached prunes with mascarpone — a recipe Alberti says he swiped from an Italian café in Brooklyn. Fortunately for our stomachs, he was out of tiramisu.

By the time we lumbered out into the night, the river was still low and still. The next day, Sandy would blow into Vermont with a few strong gusts but not much more, and Peasant would stay open for one more night before the chef and his family decamped for R&R in Florida.

They’ll be back in the saddle on November 15, when Alberti plans to change up the menu with winter-inspired dishes such as Moroccan beef stew. When the snow starts flying, I hope to return for some of the dishes I didn’t have a chance to try — meatballs, for one, and all-too-rare (on menus, at least) chicken scarpariello.

With any luck, those sandbags protecting Peasant will go unscathed through many future storms.