Storm Large Is a Force to Be Reckoned With 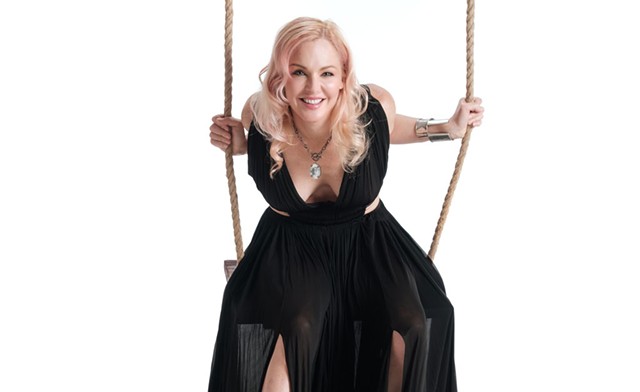 It's rare you'll encounter someone with as much gusto as Storm Large. The Massachusetts-born, Portland, Ore.-based maven currently performs with her band, Le Bonheur. They present a grand deconstructionist survey of the Great American Songbook. Hopping from standards such as Rodgers and Hart's "The Lady Is a Tramp" to rock classics like Lou Reed's "Satellite of Love," Large, 49, serves up a sumptuous smorgasbord of pop panache.

She's also been one of the lead vocalists of cosmopolitan, multilingual jazz-pop ensemble Pink Martini since 2011, when cofounder and front person China Forbes underwent vocal chord surgery and was temporarily unable to perform. In a 2018 conversation between the two singers for Portland's Artslandia, Forbes referred to Large as a "Broadway Courtney Love."

That's likely because of Large's extensive background in hard-rock music and her profane, confrontational disposition. The artist chronicles years of hard living in her memoir, Crazy Enough, which she adapted from her 2008 one-woman cabaret of the same name. During Large's childhood, her mother was institutionalized on and off while struggling with schizophrenia. For years, Large lived her life in reaction to the possibility that she might suffer the same fate.

In conversation, Large is hilarious, off the cuff, vulgar AF and totally genuine. And she has an anecdote for everything. Expect to hear some when she performs on Saturday, March 9, at the Flynn MainStage in Burlington.

Seven Days caught up with Large by phone.

SEVEN DAYS: Since mental illness is a major theme of your memoir, I wonder if you have any advice about starting conversations with family or friends who may be silently suffering.

SD: I guess both.

SL: I have no clinical background in terms of knowing a responsible way to answer that. I've encountered mental illness in so many varying levels. In the arts, we have a lot of folks suffering and medicating depression with drugs and alcohol, or sex. I think depression is a lot more widespread than people are admitting. I wish I had an answer.

The most basic thing is, if you love someone and you know they're suffering, just let them know they are loved, they are heard, they are seen. And nothing is too weird or too scary for you to hear from them, even if it sounds like they're gonna be angry with you or reject you. It has to be an unconditional willingness [to listen] instead of telling someone what they should do.

SD: Since Crazy Enough started as a one-woman show and music album, I think the natural progression is a Netflix original series. Who would play you at various points in the story? It can be anyone from any time period.

SL: I've had good friends actually want to film it. I was really frightened by that idea of it being so big like that. In a way, I felt sort of protective of my mother and scared to let go of creative control in terms of how she was depicted. Who was it that did "The United States of Tara"?

SL: I felt that — and the musical Next to Normal — I felt they handled [mental illness] with such accuracy without pandering or being histrionic or pedestrian. They really did their homework. I had to literally run out of the second act of Next to Normal because it was so close. I was sobbing. In terms of playing me, I'd want Pam Grier to be me, but I think that's not realistic.

SD: Probably not, for multiple reasons.

SL: I know, but she's so awesome! I wanna be as hot as that. Let's see, I've been told I look like, uh, she was on "30 Rock." I'm not really hip with actors. She looks like she could be a cartoon version of me. [For] the little kid me, Drew Barrymore when she was chubby. Because I was a little chunk.

SD: I was just watching your 2009 video for "8 Miles Wide," and I have some questions. First of all, did you already know how to ride a horse?

SL: Well, I wanted it to look like a Massengill douche video. You know what I mean? It's like, what's the horse doing there? Why is it a field? We're talking about your stinky pussy.

SD: How does the song fit into the narrative of the stage version of Crazy Enough?

SL: It's kind of a declaration. Look, I'm a fuckin' weirdo. I'm never gonna be what even I thought I was supposed to be. I'm always going to be too much. I'm always gonna be too loud, too dirty. My sense of humor is too edgy or whatever. Surprise, surprise: Everybody feels that way. And so, making a catchy, kind of kids' song about it seemed to sort of speak to that for everyone.

People turned it into a big feminist thing because I'm talking about vaginas and stuff. But it's sort of a declaration of, "I'm a weirdo — but so are you." And I'm just the one who's gonna come out and say it. And you're gonna sing along — even the men. We're all trying to prove to the world we're not nuts.

SD: You've been singing with Pink Martini and Le Bonheur for a while now. Do you ever think about returning to rock music?

SL: Well, I do sing rock and roll still. I'm older, so I can't maintain that level of Foo Fighters, screamy rock intensity for three hours. But I still will scream my fucking dick straight off in certain moments when I feel it. I can turn a ballad into a super rock-and-roll song.

But physically, the way I used to perform in my twenties — I know my limitations. I cannot maintain that level, and I don't want to. I think it's more effective in terms of what I'm trying to do with an audience to have a broader palette with rock-and-roll punctuation and punk-rock fricatives here and there.

SD: Speaking of audiences, do you ever find yourself performing to a crowd that seems really nice but also kind of reserved? How do you get an uptight audience to engage with you?

SL: You know, I don't know! But I'm pretty good at it. I had a fucking lady in the front row of the Pittsburgh Symphony [Orchestra]. And I played two or three songs that were not really alternative. It was my interpretation of "Under My Skin," which is beautiful but a little bit different. Then I did Cole Porter's "It's All Right With Me," which was a little jumpin' jive. And this old lady in the front row goes, "This is disgusting!"

She said it so loud and jumped up, and her poor helper person had to help her out of her chair. She just filled her diaper and was so pissed and made a huge scene about stomping up the [aisle]. I was apologizing profusely to everyone and afterwards I was like, "I have no idea what I did. I'm so sorry."