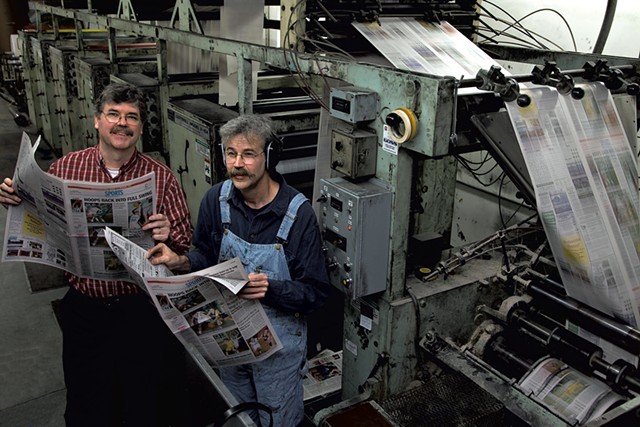 The seed that grew into the award-winning documentary Storm Lake was planted in April 2017, the day New York cinematographer Jerry Risius saw headlines announcing that a small northern Iowa newspaper had won a Pulitzer Prize. A northern Iowan himself, Risius said the news triggered what he called "my Linda Blair moment, which is my head spinning around," he said.

Art Cullen of the Storm Lake Times had won the 2017 Pulitzer Prize for Editorial Writing. Risius, who grew up about a 90-minute drive from Storm Lake, didn't know Cullen. "But I looked him up, I read his articles," he said, "and I immediately, like, fell in love with what he was doing in small, rural Iowa."

The 2021 film, which Risius codirected with Middlebury College alumna Beth Levison, is one of two documentaries showing in six towns this month as part of the Middlebury New Filmmakers Festival Vermont Tour. The other is the award-winning climate change documentary The Ants & the Grasshopper.

"What's just surprising is how much the film resonates no matter where we show it." Beth Levison tweet this

The tour runs Thursday, February 3, through Saturday, February 12, beginning at Main Street Landing Film House in Burlington, where the Vermont International Film Festival will host showings of both films. The tour continues to Putney, Rutland, Woodstock, Randolph and West Dover.

Levison, who produced Storm Lake, will attend and participate in audience discussions following showings of the film in every town but West Dover.

Storm Lake is a meatpacking town — Tyson Foods has two plants there — and roughly half of the residents are recent immigrants. Art Cullen's brother John started the Storm Lake Times in 1990, and five Cullens have bylines. The film tells the story of the newspaper and its relationship with the community. It also highlights the struggle of newspapers nationwide to survive. In one scene, Art Cullen takes seven crumpled dollar bills out of a foam cup in a café, where his paper is sold on the honor system.

Between 2005 and 2020, the U.S. lost one-fourth — 2,100 — of its newspapers, Penelope Muse Abernathy wrote in her 2020 report "News Deserts and Ghost Newspapers: Will Local News Survive?" published by the University of North Carolina. In the last two years, Abernathy told Seven Days, 100 more papers have closed.

Levison and Risius talked with Seven Days about their film and the robust, ongoing campaign it has sparked to support local journalism.

BETH LEVISON: When we first started out, we thought that we were making a film about Art [Cullen]. And then it did become an ensemble film. And then it really became a film about the relationship between a newspaper and its community and how each is a mirror of the other.

So as we continued to film, the stakes just got higher, and the role of the newspaper became even more pronounced.

SD: Your film highlights how hard it is for newspapers to stay in business. What factors have put them in such dire straits?

And another thing is that people have really lost faith in news. There has been such a successful misinformation campaign and a campaign against journalists.

JERRY RISIUS: Hedge fund owners are now going in and taking over newspapers and hollowing everything out, and just creating a business, essentially. Having local newspaper writers or editors and publishers that have a stake in the community is really important.

When you have a hedge fund operator, they're not going to really be invested in having investigative reporters; they're going to be considering what their dividends are going to be at the end of the year.

SD: The film has been screened more than 100 times — not counting its showing on PBS — and you have participated in post-screening conversations with many of those audiences. What are you hearing?

BL: What's just surprising is how much the film resonates no matter where we show it. So, we may show it in a small town like Algona [Iowa], and the community, of course, really sees itself. And then we screened the film in New York City, where this local reporter [from Documented, a nonprofit news site covering the city's immigrants] was saying, "The Storm Lake Times is trying to tell the kinds of stories that we're telling, of people who are new to this country, trying to make a go of it, the challenges they're facing."

One of my favorite stories, though, is, we took the film to the Hamptons [International] Film Festival in East Hampton, N.Y.; it's a well-heeled community out on Long Island, and there were celebrities in the audience. I was onstage and being interviewed by David Rattray of the East Hampton Star. David asked me a bunch of questions, and then he goes to the audience for theirs. And someone raises their hand, and they said, "David, are the struggles that the Storm Lake Times is facing, are those struggles that you've experienced?" And David Rattray got to say, "These are exactly the same sorts of struggles that we're facing."

BL: The impact campaign is designed to raise awareness in communities nationwide about the role that local news plays in an informed democracy. It's encouraging viewers to subscribe to your local newspaper, write letters to the editor, engage with that newspaper and pay for your news.

Those were the initial goals. But now we are spreading into this next phase [wherein] we are working to use the film as a tool to build local philanthropic support of local news; we are using the film to increase news literacy in middle schools and high schools across the country, and in the general public.

JR: We were in San Francisco — I think it was San Francisco — and we saw a young journalist from Guatemala who was actually reporting through texts because the Guatemalan community did not read newspapers and they do not watch television. And they started a news agency that was, like, group texts going out. It was an interesting way to bring the community together but also a way just to keep people informed.

BL: In Greenfield, Iowa, the newspaper was bought by a bigger conglomerate; [it] was no longer locally owned. As a result of seeing the film, the community is now in the early stages of trying to buy their newspaper back.