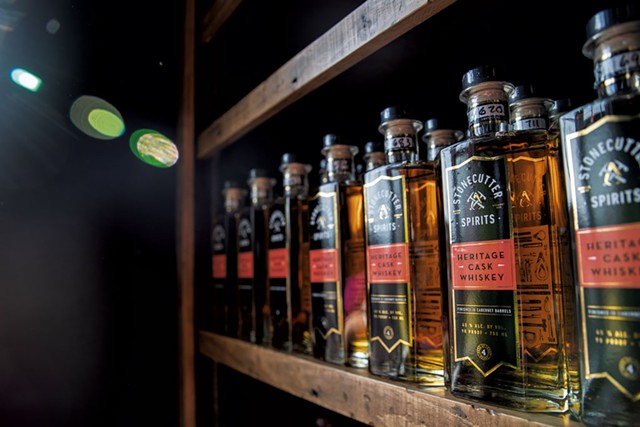 Update, September 13, 2018: On Wednesday, September 12, administrators at the Vermont Department of Liquor Control issued Highball Social the permits it needed in order to open.

Two federal agents walk into a bar. The bar's owners say they want to bottle homemade hooch on-site. The agents inspect the hip, modern lounge and discern that it is neither distillery nor packaging plant. They refuse to grant the requisite permit, and the bar's owners panic: How will we stay open now?

The scenario sounds like a riddle. But it's exactly what happened when the federal Alcohol and Tobacco Tax and Trade Bureau appeared at Stonecutter Spirits Highball Social in Burlington on September 4.

Stonecutter cofounders Sas Stewart and Sivan Cotel never really wanted to age or bottle their gin and whiskey at Highball Social. They have a spacious facility in Middlebury for that.

Instead, they summoned the TTB to create a paper trail at the Vermont Department of Liquor Control's behest. The week prior, DLC administrators advised Stonecutter that, lacking a federal permit to manufacture or rectify liquor on-site, the state could not allow Highball Social to open. The doomed TTB paperwork was the latest in a twisting, yearlong saga during which Stewart and Cotel worked closely with the DLC to open their doors at 71 South Union Street.

The good news: Since late August, the bar has been open under temporary permits typically prescribed for special events.

The bad? The state permits that would allow Highball Social to open as a full-service bar-restaurant have been stuck in regulatory purgatory since June.

Stewart and Cotel knew from the start that their model might require some legal wrangling: If they're successful, theirs would be Vermont's first permanent bar-restaurant operated by a liquor manufacturer.

The original plan was to open in May or June. But Stonecutter's owners anticipated that gut-renovating the former mortuary space into a swanky restaurant and lounge might take longer than projected. (Folino's pizzeria next door supplies the food.) They budgeted for such delays.

"We were ready [to open] the first of July," Cotel told Seven Days via phone last week. "Instead, we've been trying to satisfy ever-changing requirements from the DLC. They just keep raising the bar every time."

"We don't have the authority to selectively enforce the laws." Patrick Delaney tweet this

The unexpected two-month permitting kerfuffle quickly absorbed their contingency funding and, according to Cotel and Stewart, cost the business tens of thousands of dollars in legal expenses and lost revenue.

"We now face a severe reality," they wrote in an August 28 letter to Vermont Commerce Secretary Michael Schirling. "[We are] running out of funding. With over twenty employees, and our two brick-and-mortar locations, these regulatory impediments and delays have ... placed our entire business in jeopardy."

In general, Vermont's legal code prohibits liquor manufacturers from owning bars or distributing their liquor directly to the public.

According to DLC Commissioner Patrick Delaney, Vermont's liquor laws offer a long-standing, black-and-white approach to the issue: "The [relevant] statute was written in 1933 and has remained as it was written," Delaney told Seven Days last week. "We've been aware that there was a legal separation of manufacturing and retailing since day one [of this project.]"

The law seeks to prevent spirits producers from setting up vertical production-distribution-retail monopolies like the ones that ruled during Prohibition, Delaney added.

As licensed manufacturers, Stonecutter's owners — and their attorneys — believed that Highball Social qualified for the exemption. The space at 71 South Union was an expansion of the company's premises. And the establishment — in which they would sell beverages to the public — was under their direct legal and physical control.

Just to make sure, though, they engaged the DLC in October 2017, during the project's conception phase.

At that point, Cotel and Stewart said, DLC's Delaney and Deputy Commissioner Gary Kessler indicated that the law was on Stonecutter's side. The officials outlined a clear path by which Stonecutter could open its doors: by securing three different permits.

As insurance that the establishment would work from a boots-on-the-ground enforcement angle, Delaney recommended that Stonecutter speak with DLC Enforcement Chief Skyler Genest, who, Cotel said, endorsed the plan.

With assurances that their bar would work legally, Stonecutter's owners signed a lease on the space and began planning their build-out.

In November, Stewart and Cotel presented their plan to Vermont's full DLC board. Stewart said the board responded with positivity and enthusiasm.

In February of this year, Stonecutter's owners reconfirmed with Delaney, Kessler and Genest that the business would be permissible under state law. In an email dated February 20, Genest confirmed that the company was, in fact, entitled to one of the permits that had previously been in question.

In May, Stewart and Cotel again met with the DLC's Kessler to review home-stretch permitting procedure. Everything appeared copacetic. In June, DLC sergeant and licensing director Martin Prevost inspected the space and — according to Stewart and Cotel — said it appeared to meet the requirements, pending acquisition of fire, health and occupancy certificates.

Stewart and Cotel submitted those certificates to the DLC with their final paperwork in early July. Three weeks later, Prevost requested two additional tax certificates, which Stonecutter provided on August 1.

Then, on August 5, Prevost called to advise Cotel that he could not issue the permits, because Vermont law prohibited it. According to the licensing director's reading of the law, the rule's exception did not apply in this case because Stonecutter didn't plan to manufacture or rectify alcohol at its Burlington location.

As a work-around, Prevost suggested Stewart and Cotel register a second company with the state and hire a non-Stonecutter principal to run it. That idea was a nonstarter for Stonecutter, but the company's lawyers worked with the Vermont Attorney General's Office to formulate five legal options that would allow Highball Social to open.

On August 15, Commissioner Delaney advised Stonecutter's owners that if they could obtain a federal permit to manufacture or rectify liquor at the new location, the DLC could invoke the rule's exception and clear the bar for opening. He worked with Stonecutter and his contacts at the TTB to push through a new permit — to warehouse liquor at 71 South Union — in record speed.

But when Prevost reviewed the new federal permit, he advised Stonecutter that, in fact, warehousing liquor on-site wouldn't qualify the space as a manufacturing or rectifying facility. They'd need to bottle liquor there, too, and doing so would require an amendment to the new TTB permit.

Bottling at the bar would be impractical and inconvenient, Stewart said last week, seated at a table at Highball Social. "But if that's what's required," she continued, exasperated but upbeat, "then, sure, we can throw a bottling party once in a while and people can come and see what the process looks like."

Stonecutter immediately submitted the requested TTB paperwork. After inspecting the space on September 4, the TTB declined to amend the warehousing permit, since the bar is not a bottling plant.

Via phone last week, Delaney lamented the situation but said his hands were tied. "Unfortunately, we're between a rock and a hard place," he said. "The statute is quite clear to anyone who reads it. We don't have the authority to selectively enforce the laws. 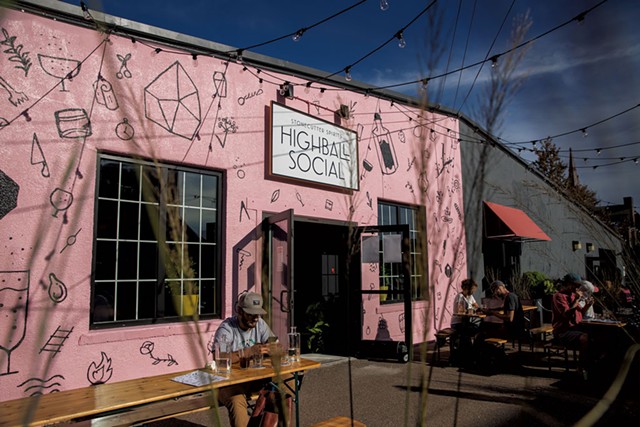 "We don't have the prerogative to rewrite [the law]," Delaney added. "That has to be done legislatively."

The main issue seems to be a semantic one: What "premises" legally count as the manufacturer's premises? Early on, the DLC seemed to believe that any space over which Stonecutter maintained control was, by definition, part of Stonecutter's premises. But Prevost, who was charged with rubber-stamping the permit — ascribed to a different reading of the law: In his view, actual manufacturing or bottling had to occur on-site.

Politicians point to these kinds of bureaucratic breakdowns when they advocate deregulating industry so that businesses can grow and thrive. During his 2016 campaign, Vermont Gov. Phil Scott built part of his platform around this very issue.

Stewart said that, after spending five years building a prosperous, job-creating business in her adopted home state, she was saddened by the government's inability to support entrepreneurs.

"Vermont has a reputation for being a place that is hard to do business [in]," she said. "But [until now], we hadn't had that experience at all. We thought Vermont was a lovely place to do business. Unfortunately, they've proven the stereotype."

At the Vermont Department of Commerce, Secretary Schirling is working with Stonecutter and the DLC to help craft a resolution that works for everyone.

"It's no secret that a goal of the [Scott] administration is to make state government more innovative and responsive to the needs of business in general," he said. However, Schirling acknowledged, "Government is slow to respond to innovation and modernization."

But too much change too quickly can create an environment of confusion and instability, he added. Rather than adapt to accommodate every new business proposal, government must provide clear guidance to businesses and build clarity and predictability into the regulatory process, Schirling said.

Without succinct protocols in place, businesses must rely on the advice of individual state administrators when their projects don't fit neatly into a 100-year-old statutory framework. Even when the law seems clear, it can still be subject to interpretation.

Last Thursday, Stewart and Cotel met in Montpelier with Schirling and the DLC in hopes of resolving the matter once and for all. Delaney and Kessler agreed to compose a memo interpreting the statutory language in a way that would allow Highball Social to open with no additional red tape.

"We came to a consensus," Delaney told Seven Days last Friday. "We have identified a path to redefining a term in the business statute to allow this business to continue operating."

Delaney said he plans to meet with the DLC board on Wednesday, September 12, and will recommend that the board adopt the definition in practice. That adoption, in turn, should enable Prevost to approve Stonecutter's permits.

Stewart and Cotel said they remain hopeful. If all goes well, visitors will find them later this week in Burlington, serving drinks to celebrate.

The original print version of this article was headlined "Mixed Messages"