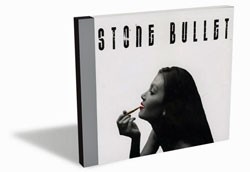 In my heart of hearts, I want to believe that the members of Stone Bullet pull up to every gig in an IROC-Z, shrouded in a plume of cigarette smoke as they stumble out of the car clad in torn leather pants and cheap sunglasses, reeking of Jack Daniels and Aqua Net. I want to believe they are surrounded by a cadre of slutty groupies and greasy manager types with bad British accents. And that one of them is missing an arm. I want to believe all this because Stone Bullet sound as though they were transported from the golden age of cock rock, perhaps through some mysterious portal linked to MTV’s “Headbangers Ball,” to deliver us from Justin Bieber, Lady Gaga and other assorted crimes against rock and humanity.

In truth, Stone Bullet are composed of four twentysomethings from Barre, Vt. Though they typically sport jeans and T-shirts and hardly seem the types to indulge in hair-care products, it’s fitting that such a hard-rocking throwback to 1980s pop metal comes to us from the Granite City, a hardscrabble town that can seem like it’s been stuck in a Ratt video since 1986.

The band’s self-titled debut is a rowdy, shamelessly sleazy romp that harks back to the glory days of Mötley Crüe, Guns N’ Roses and Def Leppard. “Angelina” is a blistering opener that introduces lead vocalist David Lawrence as a worthy successor in the long line of high-pitched hair-metal screamers. “No Tell Motel” is as bawdy as its title suggests and features face-melting lines from lead guitarist T.J. Powers over a salacious, sex-metal groove. Nikki Sixx would undoubtedly approve.

“Pretty Thing” is a passable nod to David Lee Roth-era Van Halen. The boner-driven “For the Ages” is a scorcher that would do Twisted Sister proud. “Talk a Good Game” is yet another Crüe-worthy bruiser. Really, all that’s missing from this cock-rocking trip down memory lane is the six-minute power ballad.

The original three needs were wine, women and song. With the advent of rock, we collectively updated that chestnut to sex, drugs and rock and roll, which became the fundamental principles of the genre and lifestyle. That unholy trinity can be forgotten when we try to elevate rock as an art form. Nothing against the Radioheads of the world, but that’s exactly why bands such as Stone Bullet are important. They remind us of the gleefully seedy heart of rock and roll.