Stone Bullet, Sons of the Gun 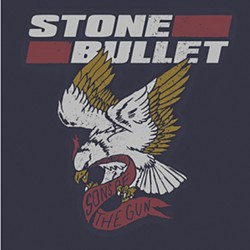 Barre band Stone Bullet have been honing a specific sound over the past seven years, as if Nirvana and U2 had never happened. This is brash, loud, awesome rock music. The conceit could easily veer into corny gimmicks and tribute-band territory, but, as it happens, Stone Bullet kick some serious ass.

Rock bands can be made or broken by their lead singers and, fortunately, Dave Lawrence is a real find. He sounds commanding as all hell, but he's clearly having fun. Best of all, the man knows his range and stays there.

Stone Bullet also have nailed the essential but elusive Zen of the dual guitar attack. It's a treat to listen closely to the interplay between Lawrence and TJ Powers. There's subtlety here despite the balls-out nature of the beast.

On earlier projects, especially the band's eponymous debut, the songwriting was often, well, goofy. Their second album, Drive, was peppered with more serious and personal material. The latest, Sons of the Gun, is the payoff of that growth.

The album kicks off with "Don't Call It a Comeback," a riff-driven burner with a sing-along hook that explodes into a tasty, flashy Powers guitar solo. That happens a lot.

Powers is a show-off shredder, but he's more Vinnie Moore than Yngwie Malmsteen. For all his technical chops, what really makes his solo work stand out is his ear for melody. And he manages to make every solo on the album sound like it was the last damn recording of his life.

For all the talent on the front end, though, Stone Bullet's real secret weapon might be the rhythm section of Steve Audy on bass and Kevin Bell on drums. Audy is the perfect mix of assertive and subdued, and the mix lets him shine. It's not common for a hard-rock album to pack this much bass, but Lemmy would surely be proud.

Bell is simply a machine. His calculated aggression is the essential ingredient that lets all the other players shine. Eschewing the double-kick polyrhythms of modern metal, Bell subscribes to the Phil Rudd (AC/DC) school of rock drumming: Push the beat and get out of the way.

To the band's credit, it's almost impossible to pick a clear winner from this litter. "Taught Me Sin" is a definite highlight. "Heart Attack" was a brilliant closer. And it's hard to imagine "Come Get Some" failing to flatten the crowd at any dive bar in America.

The only drawback of Sons of the Gun is its brevity. At eight tracks, this is a shot glass short of being an EP. Still, the album offers the best songwriting and production of the band's career so far. Any fan of the genre is strongly advised to give Stone Bullet a spin.

Sons of the Gun by Stone Bullet is available on iTunes, Spotify, Amazon and CD Baby.

Speaking of Stone Bullet, Sons Of The Gun