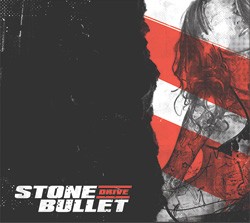 Even though rock and roll was born and bred in the South, music’s rowdiest child has long held sway in the North, too. Vermont’s recent musical history, however, has trended toward jam bands, indie rock, experimental, noisy metal and punk bands, and assorted digital beats. All of which makes Barre’s Stone Bullet an anomaly. The band’s latest studio release, Drive, only serves to highlight this status — rock outliers — in the band’s home state.

Stone Bullet are David Wayne (guitar, lead vocals), T.J. Powers (lead guitar, vocals), Seth Roya (drums) and Steve Audy (bass, vocals). Together they play a recognizable type of hard rock, and Drive has the same bombast and masculine flexing as anything currently heard on rock FM’s rotation. One listen to tracks such as “To the Grave” or “Stay for the Fight” invites comparisons to such acts as Buckcherry and Mötley Crüe, meaning that both Stone Bullet and Drive could prove divisive to local rock-and-roll fans, especially among the younger college crowd.

In 13 unlucky songs, Drive presents a healthy brand of blues-based sleaze; the kind of nasty, barroom danger that Slash has been pumping out since the late 1980s. An example of this can be found on “Hit So Hard,” a boiling, partially acoustic track that feels like an overheated road trip through the Southwest. On the whole, there’s nothing New England-y about Drive — its grooves and lowdown boogies are in keeping with rock and roll’s Dixie roots.

This attachment to hard-rock traditionalism makes Drive ring true but also makes the record derivative. You’ve heard this sound for more than 20 years now, and just because Stone Bullet are out of the general loop of Vermont music doesn’t mean they’re not like a thousand bands all over the U.S. Songs such as “Perfect Mess” and “Out of Luck” are like generic parodies of earlier rock-and-roll songs — almost as if Stone Bullet are following Social Distortion’s playbook a little too closely.

This is a shame, for Drive makes it clear that the Barre boys know what they’re doing. The problem is simply that it’s been done too many times before, and Drive ultimately fails to give this tired picture any new color.