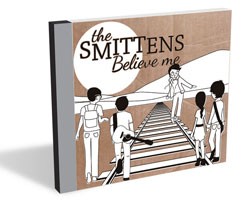 To say the least, so far it’s been an interesting 2012 for local twee-ty birds the Smittens. They’ve just returned from a lengthy jaunt across the pond, where they toured the UK and Scandinavia. And when they take the stage for a homecoming gig and album release party at the BCA Center in Burlington this Friday, August 17, the indie-pop band will do so in the midst of numerous, and in some ways profound, changes.

For starters, the band has a new member, longtime Burlington songwriter Missy Bly. Though as of this writing, she has yet to be given an official Smitten-ly cute nickname. Might I suggest “the newest Smitten”?

Additionally, the Smittens have a new record out titled Believe Me. It’s the band’s first full album of original material since 2008’s The Coolest Thing About Love and, aside from a single or two, their first significant release since the 2010 remix EP Dancing Shoes. While that’s a relatively long time between records, what’s interesting (aside from the catchy pop on the disc) is that the band has left its longtime label, Happy Happy Birthday to Me, and will release the album on London-based imprint Fika Recordings.

In a recent phone conversation, guitarist and vocalist Colin Clary says the decision to leave HHBTM, with whom the band had released its first three full-lengths, wasn’t easy, though it was mutual. And in a strange way, he says the Smittens leaving the Athens-based label boiled down to geography.

“We do a lot of our distribution in Europe,” says Clary. “So it really made sense to go with a European label.” He adds that there are few indie-pop labels in the U.S. working at a similar size as the band. “They’re either much smaller or much larger than where we are,” he says.

As for the record itself, Clary says it’s emotionally richer than the band’s previous work.

On the album’s cover, four members of the group, all drawn in classic Smittens cartoon style, stand on train tracks with their backs turned to the listener. A fifth Smitten, Dana Kaplan, stands further down the tracks facing the band, balancing precariously on a rail.

Earlier this year, Kaplan informed the Smittens that she no longer identified as female, was in transition and currently identifies as trans. Kaplan was not in transition when the band started recording, though Clary believes you can hear subtle clues that the decision was coming in Kaplan’s lyrics.

“The album almost feels more current now than it did when we started,” he says. “A song like ‘Turn the Music Up!,’ where the lyrics are ‘You look so pretty when you feel free.’ It’s sort of a coming-out song, but it’s a whole new coming out than coming out as gay.”

However, themes of freedom and identity have long been part of Kaplan’s songwriting.

“We see the world through each of our own lenses,” says the musician, who eschews gender-specific pronouns. “So the question is always how you match your expression with how you see the world. So maybe you can hear that in my songs to some degree, whether it’s about identity or relationship stuff, I think my songs usually reflect that. But I think it’s safe to say that any time I write about feeling free, it’s probably about identity.”

Kaplan admits to worrying about how the decision would affect the band, specifically regarding vocal parts. After all, Kaplan has long been the “Lady Smitten.” But the addition of Bly helped ease the transition, for everyone.

“I don’t know that we intentionally thought of it this way, but it’s good to have another female voice in there, especially with Dana transitioning,” says Clary. “It sort of covers our bases on harmonies.”

“It turned out to be great timing,” adds Kaplan. “To be able to have somebody else come in who identifies as female and likes to sing in that register allowed some opportunity; it was really freeing for me. For a while I was like, ‘Fuck, I’m the Lady Smitten. How am I supposed to wrap my head around this?’”

The guess here is by playing music with the Smittens.

“The band is still the band,” says Kaplan. “And I’m still going to write the same kinds of songs that I write. And we’ve been a band for so long because we’ve always been able to adapt to all of our individual needs, whether that’s around me, or Max [Andrucki] living in England, or whatever, we really are committed to each other. And that means we get to grow and change, as we all do.”

It’s a big week in outdoor music festivals. The marquee event is the Manifestivus in Cabot (see John Flanagan’s piece this week). But there are a number of other, under-the-radar fests afoot, should you be seeking an alternative. For instance, the second annual Peacham Acoustic Music Festival, which runs this Friday, August 17, through Sunday, August 19, at various locations around the lovely little town of Peacham. As its name implies, PAMFest boasts a mix of folk, old-time and bluegrass, including performances from veteran local folkie Pete Sutherland, pianist Annemieke Spoelstra with master accordionist Jeremiah McLane, steel uke blues maven Del Rey and acoustic bluesman Steve James. And that’s just Friday. The remainder of the weekend features similarly excellent performances, contra dances and workshops, including an all-star jam on Saturday evening. Visit catamountarts.org for more details.

Meanwhile, at the Magic Mushroom, er, Mountain Ski Area in Londonderry, the hills are alive with the sound of jam bands at the Green Mountain Getdown. This two-day wiggle fest (Friday, August 17, and Saturday, August 18) features local and regional acts from across the overly hyphenated jam-oriented multiverse — jazz-rock, reggae-rock, reggae-funk, jazz-reggae-rock-funk, etc. — including Flabberghaster, Kung Fu, Zach Deputy, Roots of Creation and UK songwriter Sara Lugo, among many others. Also, there will be disc golf. You can check the full lineup at trivalleyproductions.com.

In a related story, am I allowed near Plattsburgh yet? I’m guessing no, which means I’ll likely miss this year’s Backwoods Pondfest at Twin Ponds Campgrounds in Peru, N.Y. The two-day hootenanny runs Friday, August 17, and Saturday, August 18, and, like the Green Mountain Getdown, features a slew of regional and local acts mostly in the improvised rock, roots and reggae veins. This year’s headliners are Sister Sparrow and the Dirty Birds (Friday) and Max Creek (Saturday). There are some notable locals on the undercards both days, including Spiritual Rez, the Blind Owl Band and Twiddle.

There’s gonna be a whole lotta loopin’ goin’ on at the Monkey House this Saturday, August 18, when Farm offshoots Mouthbreather and Dashboard Hibachi join Megafauna and Nuda Veritas. Interesting note about the last act: Word is NV — aka Rebecca Kopycinski — is teaming up with local MC and producer Face One on an EP called Hits From the Sexx Kitchen. The idea is to blend Kopycinski’s looping and vocal talents with the MC’s noted linguistic flow and producing skillz to produce, and I quote, “a refreshing orgasm for ya ears.” As opposed an un-refreshing orgasm? And, point of order, I believe the technical term is actually eargasm. Either way, stay tuned.

In other local comings and goings, Villanelles are reportedly back in the studio and working with — who else? — Ryan Power on a new record they hope to release … sometime. I’m told they may even start playing out again. In the meantime, you can catch grunge-tastic Villanelles offshoot Phantom Suns at the Monkey House this Friday, August 17, alongside Vetica and Stone Bullet.

Last but not least, last week I reviewed the latest album from James Kochalka Superstar, I Am the Beast. But it turns out, I shouldn’t have. It was brought to my attention after the review ran that my younger brother, Tyler Bolles, actually appears on the album. Somehow, I completely missed his name in the liner notes. He added backing vocals — really more of a shout among a chorus of other shouts — on one track. Not exactly a critical role, or a performance that would have colored my impression of the record either way had I realized it, but still. Reviewing anything a family member or close friend is involved with represents a conflict of interest for a critic, no matter how small the role. I should have paid better attention to the lineup of guest performers and passed the album off to another reviewer. My apologies.

Niki and the Dove, Instinct