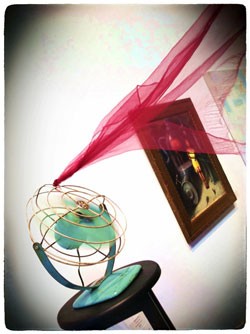 A Burlington-area gallery owner has to be a bit of a barker to keep such a risky enterprise afloat. And, sure enough, Ken Signorello, proprietor of the Vermont Photo Space Gallery at Essex Junction’s Five Corners, promises a double dose of aesthetic pleasure to ladies and gentlemen who step right up to see his current show.

“It’s art squared,” Signorello says of “The Arrangement,” a group exhibit of photos that can be loosely categorized as still lifes. “First, there’s the laying out of a work of art, and then there’s the photographing of it.”

Within the thematic framework, the 50 pieces on display range radically in subject matter and technique. There’s geographical diversity, too: The 30 photographers represent several U.S. states as well as Canada, France and Israel.

In “Caught by a Breeze,” Keith Parks of La Mesa, Calif., presents a rhythmic abstraction of thick sheaths of paper gently bent into a complex geometric array. Parks’ photo combines the classicism and modernism of a Martha Graham pose.

Michael Lew-Smith has done something similar in “Orogeny.” The cracks, swirls and smudges seen in close-up turn out to be patterns of weathered paint that this Hardwick, Vt., resident photographed on the roof of an old fire truck.

A few of the images in “The Arrangement” were clearly inspired by traditional still-life paintings — specifically, those of 17th-century Dutch masters and 19th-century French postimpressionists.

Stephanie Luke’s picture of a dead rabbit nestled next to some onions could have been composed in the Hague four centuries ago rather than in California last year. The legacy also comes to life in the glinting light and tangible textures of olives and chestnuts photographed by Jane Soodalter of South Salem, N.Y. And, à la Cézanne, St. Albans photographer Polly Raine has captured the essence of tangerines — stems and leaves included — by shooting a pair of them against a deep black background.

Memorable photos are often based on odd juxtapositions. So it is with “Fish and Broom,” one of the images from the show that may linger longest in a visitor’s memory. Pam Steeg, who lives in Huntington, Vt., claims in a wall text to have happened on this boffo combo while biking through a village in Thailand. Steeg could not have produced a more artful contrast of color and geometry if she had labored for hours to arrange this brown, handmade broom and green bucket of sardines atop a blue-slatted bench.

Some photographers clearly constructed groupings of items to achieve an intended effect. Margaret Hiden tried but failed with that approach in “America, f@ck yea!” Successful political satire is seldom seen in galleries these days, and this Atlanta photographer doesn’t break that streak with her cryptic tableau of a piggy bank trailed by three wads of play money.

“Fan Art” by Laurie McCormick of Los Angeles is another example of a contrived composition. It shows a purple, diaphanous scarf knotted to a room fan that’s blowing it partly across a framed photo of a woman wearing a yellow cocktail dress. The whole thing was shot off-kilter from an iPhone to accentuate its weirdness. “Fan Art” did, nonetheless, appeal to the exhibit juror Paula Tognarelli, director of the Griffin Museum of Photography in Winchester, Mass., who designated it best in show.

Viewers of different tastes can have their say by taking part in “people’s choice” balloting organized by Signorello as part of his populist approach to running the gallery. Just check off five personal favorites from a list of titles and deposit the slip in a box on your way out. The winner will be announced on the gallery’s website.

Signorello, who runs an information-systems company from his home in Essex, looked to PhotoPlace Gallery in Middlebury as a model for his eight-month-old operation. Like the gallery opened in 2009 by Middlebury College art prof Kirsten Hoving, Vermont Photo Space solicits submissions via the Internet for themed and juried shows that run for about a month. Both galleries pay their rent mainly through the fees they charge photographers for entries — in Signorello’s case, $20 for up to three shots.

It helps that he got “a great deal” on the renovated, ground-level space alongside Martone’s Market & Café. Signorello says the coffee house draws foot traffic to his gallery in a location associated more with traffic-light tailbacks than with browsing boulevardiers.

For each of the 11 shows he’s organized so far, Signorello has had no trouble finding photographers eager to show their work. About 100 paid to have their images considered for inclusion in “The Arrangement.”

“There’s a real hunger by photographers for opportunities to have their stuff seen,” Signorello notes. The next challenge is to persuade locals to feed ravenous artists by actually buying their work. This month at Vermont Photo Space, the special is highly palatable still lifes.