Sticking It to PTSD

Veterans are beginning to get the point of acupuncture 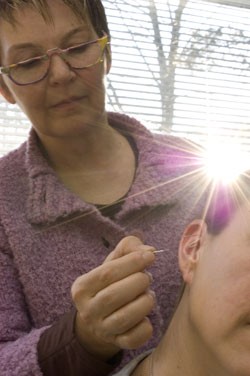 The sounds outside the Acupuncture & Qigong Health Center on Route 15 in Essex Junction on a recent afternoon are enough to grate on anybody’s nerves: trains whistling, traffic rumbling and the occasional door slamming. But inside, the darkened room is unusually peaceful. The serenity is most apparent in Colchester’s Bill Maynard, who has just received five needles in each ear. He closes his eyes and lets his tightly clasped hands relax on his black jeans. Maynard’s head tips back as if he’s sleeping.

Real slumber often eludes Maynard, who suffers from post-traumatic stress disorder — a.k.a. PTSD. In the decades since he returned from the Vietnam War — a “life-changing experience,” he says, and not in a good way — he’s been a fidgety sleeper, unable to extinguish the thoughts running through his mind. But since Maynard began coming to the acupuncture clinics, he’s been sleeping better. “And in my personal life, I’m calmer,” he says.

As Maynard and his wife, Gail, inhale and exhale, the late-afternoon light falls on acupuncturist and registered nurse Ann Ramsay, who also has her eyes closed as she offers soothing words such as “security” and “healing.” Last fall, Ramsay began offering these free, one-hour clinics to veterans of war in the space donated by the Acupuncture & Qigong Health Center. Jane Melrose and other practitioners volunteer their services as well. Through acupuncture, she and other Vermont practitioners are hoping to help alleviate symptoms of PTSD. And gradually, more veterans like Maynard are reporting relief.

According to the National Institutes of Health, acupuncture has been used for thousands of years and is one of the oldest healing practices in the world. But it wasn’t until the 1970s and ’80s that acupuncturists interested in treating addiction developed the five-point ear process evident in Ramsay’s clinic. Today, the National Acupuncture Detoxification Association (NADA) trains thousands of health professionals in auricular acupuncture. The NADA protocol has spread beyond rehabilitation and recovery centers to anxiety-ridden places such as Honduras, Indonesia, New Orleans and post-9/11 lower Manhattan.

New York-based Joan Dolan is a nurse and NADA practitioner who spent more than six years treating 9/11 victims with ear acupuncture in St. Vincent’s Catholic Medical Center in New York. “People said they slept better, they felt calmer, and they felt less stress,” she says in a phone interview.

Ear acupuncture also works really well for PTSD, says Sarah Tewhey, the veterans’ program coordinator for Acupuncturists Without Borders (AWB), a New Mexico-based nonprofit that promotes community NADA-protocol clinics for trauma victims. After Hurricane Katrina, AWB pulled together 75 acupuncturists to treat more than 8000 people in Louisiana. “In New Orleans, we treated everyone in a circle, from the homeless to firefighters,” Tewhey recalls on the phone. “It’s an incredibly democratic and equalizing process.”

Today, AWB works with six community veterans’ clinics from Oregon to Florida, and plans to help seven others open soon in places such as Portland, Maine, and Framingham, Massachusetts. Last fall in Vermont, Ramsay and Montpelier-based acupuncturists Pamela Brady and Edward Kentish — all trained in AWB techniques and inspired by people like Dolan — decided to open independent clinics in Essex Junction and Montpelier, respectively.

“We were hearing how the vets were coming back [from Iraq and Afghanistan] and they weren’t getting the services they were promised,” says Brady, who has treated Indonesian tsunami victims with acupuncture. Ten years ago, she used the same treatment to help survivors of Hurricane Mitch. “It just felt like they were getting screwed,” she adds. “They needed to be honored and to be helped.”

Brady and Kentish began practicing the NADA five-point protocol on Wednesday evenings in Montpelier. “Each point is on a nerve pathway that goes into the brain and calms anxiety,” Brady explains. The shenmen point slows the heart rate and alleviates impatience, while the sympathetic point reduces the flight-or-fight response. The kidney point is said to release toxins, the liver point to balance emotions. Finally, the lung point “nourishes and improves the immune system and eases breathing,” says Brady.

In the June 2007 issue of The Journal of Nervous and Mental Disease, researchers led by Michael Hollifield, M.D., of Kentucky’s University of Louisville School of Medicine, announced the results of a study comparing acupuncture to cognitive behavioral therapy in treating PTSD. “The data provide initial evidence that an acupuncture treatment approach may be effective and acceptable for treating PTSD,” the authors wrote.

Burlington resident and Vietnam veteran Marcus Murphy says that before trying acupuncture two months ago on the advice of a friend, he didn’t expect much. “I was pretty sure it was all hokey,” says Murphy. “But I’m usually real nervous when I drive, and I don’t sleep at night; that’s a classic PTSD thing. Afterward, driving home, I was very relaxed and, later, I was able to sleep.”

For veterans who have seen combat, the idea of needles penetrating flesh can be creepy, says Jeff, a Vietnam veteran who lives in the Montpelier area. “But I found an immediate, positive response to it after the first session; I felt a calming influence and I had an easier time sleeping,” he says.

For those who don’t want needles, ear acupuncturists can also use vaccaria seeds, tiny pellets used at the same points as the needles. At the Essex Junction clinic, Ramsay’s soothing words, the soft, spa-type music and the dusky light make the environment calming. So are the needles really doing the work? Couldn’t it just be the relaxing atmosphere that alleviates some of the PTSD symptoms?

Tewhey concedes that veterans’ clinics do indeed take place in controlled environments that can contribute to the calming. But, she points out, Katrina victims were treated in harsh conditions — moldy church basements under fluorescent lights, or on Bourbon Street — and still immediately reported relaxation or even fell asleep.

“You’ve just got to try it to believe it,” offers Brady.

So far, however, not many veterans of the wars in Iraq and Afghanistan have been trying it, and the acupuncturists are hoping to change that. While they’re thrilled to be helping Vietnam vets, says Tewhey, the initial inspiration for the project was to treat more recently returned veterans. “Current wars can re-engage trauma in veterans from previous wars,” she says. “The majority of veterans we’re seeing are Vietnam, and they seem to be really committed to getting the men and women who are coming back now to get help.”

Jeff says he sees myriad reasons for the absence of Iraq and Afghanistan veterans at the acupuncture clinics, including the stigma of mental-health problems for those who are still active National Guard or Reserve members. But having lived with PTSD for nearly 30 years, he now tries to point younger veterans toward alternative treatments such as acupuncture.

“There ain’t no quick fix, there ain’t no magic bullet; we’re still suffering the results,” says Jeff of his fellow Vietnam vets. “Guys like myself, we have lightning-fast responses, hyper-vigilance and startle reflexes, so we have no problem getting in touch with our ‘zero to 60 in one second.’ But we’re just the opposite when it comes to finding the peaceful side, the relaxing side,” he continues. “And that’s what acupuncture, more than anything I’ve found, did for me.”