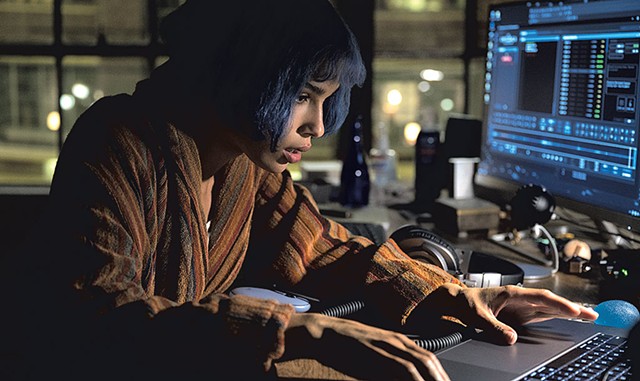 Maybe it's the pandemic. Maybe it's the relentless hype. Maybe the sheer humorlessness of Batman v Superman: Dawn of Justice broke me. Anyway, I couldn't force myself to go to a theater and sit through yet another iteration of The Batman.

Or maybe I'm just slipping toward agoraphobia, not unlike Angela Childs (Zoë Kravitz), the heroine of the latest lean and mean thriller from Steven Soderbergh.

Thrillers inspired by Alfred Hitchcock's Rear Window are nothing new, nor are films in which someone inadvertently records the evidence of a crime (Blow-Up, Blow Out). But Soderbergh has taken these familiar elements and whipped them up with a fresh context (the pandemic) and updated technology (smart speakers). Kimi (2022, HBO Max) is the story of a young woman who broods every bit as much as Bruce Wayne, has an impressive lair and even manages to take down a few bad guys.

"I'm here." That's the reassuring refrain of Kimi, an Alexa-like virtual assistant. Thanks to a human monitoring system that makes the device more responsive to its users, Kimi's manufacturer, Amygdala, is on the verge of a massive initial public offering.

One of Amygdala's employees, Angela spends her days sitting at the computer and teaching Kimi how to resolve confusing commands from users. It's all fun and games when she's helping the machine interpret an insult from a bored kid ("You're a peckerwood, Kimi!"), but things get dead serious when a different Kimi picks up the sounds of a violent assault.

Angela's boss rebuffs her inquiries, forcing her to track down the device, victim and perpetrator herself. She's a determined sleuth as long as she can do all her work at the keyboard. But when she's forced to leave the safety of her palatial Seattle loft, her terror of the outside world kicks in.

Throughout his career, Soderbergh has used the thriller genre as a sexy, commercial packaging in which to wrap up unsexy issues and make them more palatable to Hollywood execs. In Side Effects, he examined the ethics of prescribing psychiatric pharmaceuticals. In Unsane, he took on the health insurance industry. And in Kimi, he gives form to the fears that so many of us feel about opening up our homes and our lives to digital companions with corporate masters.

In the film's not-at-all-futuristic world, everyone is isolated and everyone is connected; privacy is unknown. The movie is painfully timely in its capturing of the podlike work-from-home culture. It's not just Angela who's on a digital island. Nearly everyone she deals with online, from her Romanian coworker to the CEO of Amygdala to the hit man who eventually tracks her, is also working in the humble environs of their living space, with bickering kids and knitting babas nearby.

If anyone remembers Kimi in 10 years, it will be for the astuteness with which Soderbergh depicts this strange public-private merging. The best one can say about the rest of the movie is that it's watchable. Its overall look is glossy as hard candy, Angela's loft is to die for and the music by Cliff Martinez is appropriately Hitchcockian.

The action ticks along at a good pace, while Kravitz convincingly embodies a woman who's desperate to control every aspect of her environment. When Angela finally ventures outside, Soderbergh uses clever visual and aural effects to put us inside her terror. The camera rushes toward her, while normal sounds swell to an unbearable roar.

Too bad that Angela's backstory is a flimsy, cynical-feeling evocation of #MeToo themes, as is the crime she's investigating. When Kimi reaches its abrupt coda, we may find ourselves asking, Is that all? The movie has touched on plenty of issues, all right. But the screenplay by David Koepp (The Mummy) fails to explore them in any depth.

The film's ending leaves us with an especially bad taste because it upholds the Hollywood thriller myth that the best cure for agoraphobia is to be put in a situation where one must defend one's home nearly to the death. Never mind whether this method has a scrap of therapeutic validity — it worked for Amy Adams in The Woman in the Window, so it should work for Angela, right?

Real-life fears are harder to shake, especially when the conditions of a pandemic lockdown reinforce a preexisting conviction that only home is safe. The pat, upbeat ending of Kimi goes against everything the movie has already shown us. At its best, the film evokes the allure of spaces that offer an illusion of security — but only at the price of our dependence on technology that has the potential to spy on us, all the time.

The Conversation (1974; Pluto TV, ScreenPix, rentable): Filmmakers have been investigating the ethics of surveillance since way before the world got wired. In Francis Ford Coppola's classic conspiracy thriller, Gene Hackman plays a man who becomes obsessed with a couple he's been hired to watch.

Side Effects (2013; Starz, rentable): Like all of Soderbergh's thrillers, this one about psychiatry is a mixed bag, but Rooney Mara and Jude Law give strong performances.

"Mr. Robot" (four seasons, 2015-19; Amazon Prime Video): If you're riveted by stories about technology, surveillance and conspiracies, get lost in this mind-bending series, which channels the paranoid cinema of the early 1970s.

The original print version of this article was headlined "Kimi"