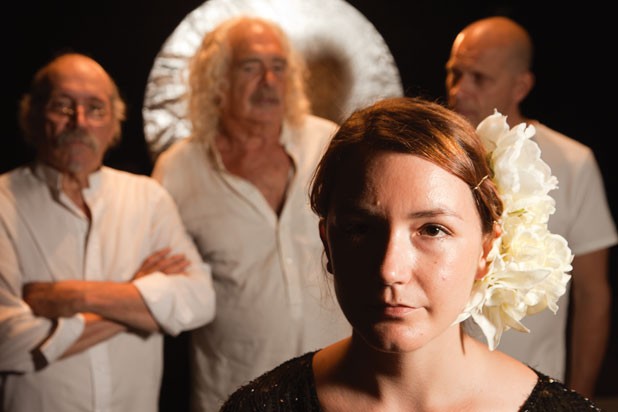 Burlington playwright and jazz trumpeter Stephen Goldberg is back with a new work of jazz-inflected theater, Waiting for Angels. Goldberg calls the show, which is currently running at Burlington’s Off Center for the Dramatic Arts, a “happening” rather than a conventional play.

It’s appropriate, given that Waiting for Angels mixes music, movement and drama to more abstract effect than did Goldberg’s most recent productions. But audiences of those pieces — his thrice-produced Burning Bridges (1999, 2003 and 2011) and his 2012 Off Center Fringe Festival contribution, No Walls — will hear familiar notes in Waiting for Angels.

The show’s characters seethe with a fury that brings to mind Tony Franks, the hard-luck horn player at the center of Burning Bridges. By turns, they also grieve for deceased companions, as Goldberg did, with the musical accompaniment of bassist R. Bill Gagnon, in No Walls. Goldberg, an Off Center cofounder, takes the comparisons a step further, saying in a telephone interview that Waiting for Angels “is influenced by everything I’ve ever done.”

Gagnon joins Goldberg again in Waiting for Angels, and, together with woodwind player Charles Papasoff, they represent a musical trio and the play’s central characters. Dressed all in white, they meander about a stage bare except for black pedestals scattered at center stage and a drummerless drum kit at stage right. When a stern offstage voice — that of actor and Off Center cofounder Paul Schnabel — commands them to carry out certain actions, refusal appears futile, and we come to understand that the group has booked a gig, so to speak, in the afterlife. In an early scene, Papasoff’s character, Charlie, describes his death in a fatal accident involving a Coors beer truck — ironic, he notes, given his distaste for beer.

In terms of dramatic structure, Waiting for Angels has more in common with No Walls than with Burning Bridges. The last is among Goldberg’s more linear plays. The main scenario is a recording session, so the musical interludes emerge organically and logically from the play’s events. No Walls is more like spoken-word performance with musical punctuation. Waiting for Angels explores life and death through musical passages that have an improvisational quality similar to those of No Walls — which is also the name of Goldberg’s production company. Gagnon’s bass riffs give the show a persistently discordant undertone.

How the characters meet their deaths, and how they feel about it, constitutes the plot of Waiting for Angels. Goldberg’s character appears to reenact getting shot in the story in something like a spontaneous mini-flashback. He mostly mourns the loss of Charlie, whom he identifies as his big brother, though Charlie appears the younger of the two in the afterlife. There they sit together, whiling away eternity in reflective conversation and traded jazz licks.

A lone female character played by Off Center cofounder Genevra MacPhail weaves a narrative thread through the piece as she describes her sort-of groupie relationship to the band, in particular her love affair with the absent drummer before his death.

Longtime Goldberg theatrical collaborator Allan Nicholls, who directed the 2003 and 2011 productions of Burning Bridges, brings a light touch to staging Waiting for Angels. Overall dramatic action is minimal in the piece, but subtle choreography brings dynamism to a work heavier on jazz riffs, monologue and dialogue.

The overall effect of the show both is and isn’t signature Goldberg. Nicholls gives the players places to go throughout the roughly 60-minute single act of the show, making good use of the Off Center boards to create fluid motion that only occasionally suggests objective-driven action — a departure from Goldberg’s usual playwriting aesthetic. Instead, the piece seems designed to generate poetic stances, as characters drift, as if in a daze, to their marks to discourse on the tragedies that have befallen them. At the show’s high points, they let their musical instruments do the talking.

When characters deliver lines, however, the words sound like pages from a Goldberg phrase book — direct to the point of blunt and freighted heavily with emotion. Schnabel’s omniscient but unseen being speaks callously of creating life only so that He may delight in its torture — a bleak vision of the divine one might expect from a Goldberg play. MacPhail can be convincing in her turn as witness to the magic and messiness of the band’s life, and her own, but can’t mask some stiffness in the language with which she tells her sad tale.

Goldberg’s character speaks of a brother who returned, shell-shocked, from war in terms that fail to rise to the dramatic moment he has created for them. Papasoff exhibits the strongest acting skills in the cast. He is credibly confused in those early moments when he’s trying to sort out what has happened to him, as he finds himself decked out in white and being scolded by the Almighty.

Goldberg’s characteristic autobiographical strokes are apparent in Waiting for Angels. His older brother was also a musician (a saxophone player) before his untimely death at age 37, when the playwright was in his twenties. And Goldberg hardly need mention another loss that has profoundly influenced his recent work: His wife, Rachel Bissex, a beloved singer-songwriter, died of breast cancer in 2005. Goldberg calls Waiting for Angels “kind of a dedication to my brother and to Rachel.”

He also sees the work as a new artistic direction toward potentially brighter prospects for live jazz music. “A straight-ahead jazz group is only going to get so far at this point in history,” he says. “It’s a different time. It’s a different period. Most of the great jazz musicians are dead. Luckily, I’m still alive.”

While the Waiting for Angels theatrical hybrid takes jazz into uncharted waters, the piece is also something of a return to roots for Goldberg. He made his way to Vermont from New York City in the 1980s as musical director of the NYC-based Nimbus Dance Theater Company when the troupe held summer residencies at Johnson State College. Combining performance genres is familiar territory for him.

In fact, Goldberg notes, the plays for which he is best known in Vermont evolved from more abstract theater pieces he wrote during his forays to Johnson. Whether shows like Waiting for Angels will expand the audience for jazz is something he’s interested in pursuing further. “Hopefully, at some point, we’ll be able to book this at jazz festivals all over the place,” Goldberg says.

By his own admission, Waiting for Angels might more effectively have joined the program of the Burlington Discover Jazz Festival this year. But the scheduling of his show was out of sync with the jazz fest’s marketing and advertising.

Rather than being miffed, Goldberg shrugs off the lapse, though he adds that he’s participated in the festival many times and merited being contacted by its organizers. “It’s OK,” he says with a self-deprecating laugh. “They probably think I’m dead. I think I’m dead sometimes.”

"Waiting for Angels," written by Stephen Goldberg, produced by No Walls. Wednesday through Saturday, June 12 to 15, 8 p.m., at Off Center for the Dramatic Arts, Burlington. $15. offcentervt.com