Steve Benen Issues a Challenge to the GOP in 'The Impostors'

It seems subtly symbolic that the type on the cover of Vermont author Steve Benen's latest book is right justified. "It's of note," he conceded, chuckling. "It would not surprise me if the designers had that in mind, but I can't confirm it." Given the book's subject matter and title — The Impostors: How Republicans Quit Governing and Seized American Politics — the choice was surely not a coincidence.

Benen, 47, is an Emmy Award-winning producer of "The Rachel Maddow Show" on MSNBC. He curates the program's MaddowBlog and has been an influential voice in American political commentary for more than a decade, contributing to various political blogs, newspapers — including this one — and other national media outlets.

In The Impostors, Benen trains his sights on the GOP, along with the full force of his journalistic skill and political connections. His thesis: that the self-proclaimed "party of ideas" has become what he terms a "post-policy party." Rather than focus on governing, Benen contends, modern Republicans are concerned less — if at all — with making policy than with acquiring and maintaining power.

While exhibit A for Benen's thesis is President Donald Trump, the writer traces the roots of post-policy governing further back than his election in 2016. Trump, he argues, is the inevitable result of years of cynicism and bad-faith politicking. Covering the period from the 2008 election of Barack Obama through Trump's impeachment, Benen crafts an even-keeled and (mostly) dispassionate case that Republicans have abandoned not only their own long-standing ideals but those of American democracy itself.

"I'm not representing a Democratic argument so much as I'm creating a challenge to Republicans to start being better," Benen told Seven Days last week.

We spoke with Benen by phone from his home in Essex.

SEVEN DAYS: Is there a better argument for the thesis of your book than what Trump is doing to the U.S. Postal Service right now? 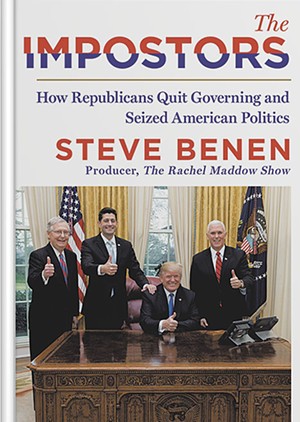 STEVE BENEN: It's fascinating to me that the period in which I stopped writing was basically last fall. And when the impeachment crisis started, late last year, I was fortunate to be able to squeeze in some additional content in one chapter as it relates to the Ukraine scandal and impeachment. And I thought, Well, so long as nothing else happens that would in any way reflect on the thesis of the book, then I'll be fine...

SB: Needless to say, in recent months we've seen so many examples of Donald Trump and the Republican Party rejecting governing norms and even just the ability to govern. Between the coronavirus, social justice protests and now the targeting of the postal service, the evidence to bolster the thesis is now coming on a daily basis.

SD: How could you have known that impeachment would have been only the fourth or fifth most dramatic political event of 2020?

SB: I'm cautiously optimistic that there will be a paperback version of The Impostors in the not-too-distant future, and I'm optimistic that I'll have plenty of content to work with for an updated and expanded version.

Having said that, though my book doesn't directly speak to events of the last few months, I think that people who read it will be able to acknowledge the thesis and appreciate the fact that it can be applied to all of these events as they occur. The book is about Republicans' indifference toward governing. And I think any fair analysis would show that the book is on to something here.

SD: In your mind, Trump is not the cause of the disease; he's the black spot on the lung after years of smoking.

SB: That's an excellent analogy. Trump is the personification of my post-policy thesis. Post-policy governing has certain hallmarks: an indifference toward data and evidence and expertise, an inability to take the substance of policy making seriously. Certainly, if we were going to identify one person who embodies this, it's Donald Trump. But the case I try to make in my book is that it's not a recent phenomenon.

SD: When did it begin?

SD: Why is the left so inept at stopping them?

SB: One of the core problems is that a lot of Democrats have not yet fully come to terms with the fact that they're the only governing game in town. If you're someone like Joe Biden, for example, and you've been engaged in policy making for half a century — Joe Biden can remember negotiating with Republicans in good faith, compromising on important matters of public policy and making certain assumptions about what it takes to cooperate with the other side. And there was an era in the not-too-distant past when Republicans could be fairly characterized as a governing party; they took the process seriously.

"They disagree about the very nature of governing." Steve Benen tweet this

I talk in the book about how Barack Obama would come to negotiations with facts and figures, working from the assumption that he could persuade his Republican rivals with evidence and data, not realizing that data and evidence were irrelevant to them, because they are a post-policy party. But it's only been a period of 10 or 12 years. So Democrats en masse have not come to terms with the fact that Republicans simply don't care about governing anymore.

SD: So Democrats are Charlie Brown, and Republicans are Lucy with the football.

SB: Yes. For typical Americans, there's an understanding that the parties disagree. But what I hope my book does is take the next step and say that they don't just disagree because one side is on the left and one side is on the right. They disagree about the very nature of governing.

SD: Is there a tipping point — like, say, a public health crisis in which 160,000 Americans die as a result of federal negligence — where the voters might start holding Republicans accountable?

SB: I hope so. There's evidence in polling that suggests a large swath of the electorate has grown tired of Republican failures. On a related note, they have become equally repulsed by Republican extremism. I don't have delusions that my book will somehow change the nature of public understanding of current events, but what I hope will resonate is that it's not just a matter of extremism or partisanship, it's about an inability to recognize the importance of using the levers of power themselves.

SD: So you have hope that it's fixable?

SB: Political science tells us that parties change when voters tell them they have to. So long as a party is winning at the ballot box, there's no incentive to change. My hope is that, the more Republicans lose — and I think they're likely to do poorly this year — the more they realize they're on a course that's unsustainable and they're going to have to begin taking governing seriously again in order to regain the trust of the electorate. I think that's the only thing that will force them to change.

It's difficult in the middle of a storm to see the clouds breaking on the horizon. But we're experiencing these post-policy problems in painfully acute ways, and polling suggests that Americans aren't satisfied. And that dissatisfaction, at least according to political science, will lead to electoral consequences. And that would be a reckoning for Republicans, a reminder that their abandoning of governing norms has failed, not only as a matter of policy making but as a matter of politics.