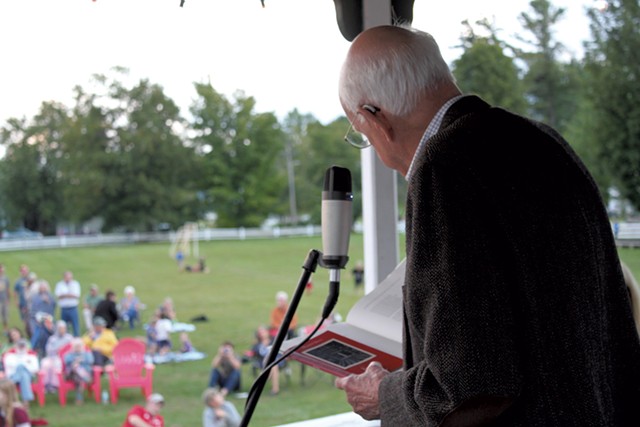 In "A Poem on Hope," Wendell Berry writes, "Because we have not made our lives to fit our places, the forests are ruined, the fields eroded, the streams polluted, the mountains overturned."

Words like those from the 83-year-old farmer, poet and essayist — whom environmental activist Bill McKibben calls "the prophet of responsibility" — have inspired many acolytes to turn to rural farming as the antidote to cultural and ecological destruction. Among them is Craftsbury native Tim Patterson, who recalled how, after many years abroad, he read Berry while in Thailand. In 2010, Patterson decided to return to his hometown and buy land.

Today, he's the director of admissions at Sterling College in Craftsbury Common, where he joined the crowd welcoming Berry for a brief appearance on Saturday. The self-styled "Mad Farmer" (the title of one of his poetry collections) had come to help announce a new partnership between the Berry Center, located in New Castle, Ky., and the Vermont college.

The Berry Farming Program at Sterling College represents a new iteration of the Berry Center's educational initiative. Through its collaboration with Sterling, the center will offer — in Kentucky — accredited undergraduate and continuing education courses in place-based ecology and farming, beginning in the fall of 2018. Specific curricula have yet to be released.

The announcement coincided with a kickoff party and reunion celebrating Sterling's 60th anniversary. Some 200 students, alums, faculty, staff and community members gathered on the town commons, many with name tags and cocktails or beers in hand. Some had traveled long distances, including Jennifer Jordan '76, who lives in Salt Lake City, and Cortney Wright '95, from Olympia, Wash.

Two fire pits crackled amid the folding lawn chairs ringing the gazebo. When Sterling president Matthew Derr took the microphone, he noted that hosting Berry was "sort of like having the Dalai Lama visit a Buddhist monastery." He then introduced Mary Berry, Wendell's daughter and executive director of the Berry Center, which she founded in 2011.

"At Sterling College," she said, "I have found a place that shares our vision and hope for a better agriculture."

According to its website, the Berry Center's central mission is "to ask and answer two of the most essential questions of our time: 'What will it take for farmers to be able to afford to farm well?' and 'How do we become a culture that will support good land use?'" On a purely practical level, the partnership will give the center the accreditation it needs to advance that program through education.

The center first began offering courses in February 2012, accredited through St. Catharine College near Springfield, Ky. The Berry Farming Program, directed by Leah Bayens, espoused what it called "an education for homecoming."

When St. Catharine closed permanently in 2016, owing to what Mary Berry described as "severe economic difficulties," the center had to regroup. Though many colleges were interested in forging a new partnership, she told the crowd, "I had many unsatisfactory meetings." Berry added a jab at President Donald Trump: "I found a lot of college presidents who could be running for president [of the U.S.], if you know what I mean."

Derr first reached out to the Berry Center last November. At first, Berry said she was reluctant to consider partnering with a school as far from Kentucky as northern Vermont. However, Derr appears to have been persuasive. Berry not only agreed to the institutional partnership, she is now a college trustee.

"It feels like we have the right mission for this particular moment in history," said Patterson. 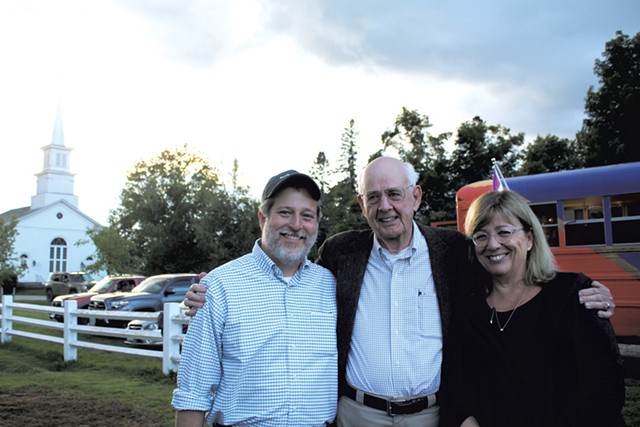 Founded in 1958, Sterling evolved from a boys' prep school to a nationally recognized leader in environmental stewardship education. It is one of eight federally recognized "work colleges" in the country, meaning students are required to hold a job regardless of financial need, with their earnings credited toward their tuition.

The collaboration with the Berry Center is one of several relatively new initiatives for Sterling. The college launched its School of the New American Farmstead in January 2016, offering two-, six- and 10-week programs that include courses in areas such as food writing — with classes taught by esteemed critic Ruth Reichl — and charcuterie.

In February 2014, Sterling and the Yestermorrow Design/Build School in Waitsfield had joined forces. Now Sterling continuing education credits are available to Yestermorrow students, and Sterling undergraduates can integrate Yestermorrow programs into their degree trajectories. Sterling also has maintained connections since 2014 with New York University's graduate program in food studies.

Patterson described the college's diversified networks as a survival strategy based on "the ecological principle of interconnectivity." "Without interconnection," he said, "if you're really small, you're really fragile. [But] a web of connections creates resilience."

Sterling is small — but growing. Enrollment has been on the rise since 2012, and this fall the school will welcome its largest incoming class in history, with 136 matriculated students. "The goal," Patterson said, "is to broaden our impact without growing so fast that we lose the qualities that make our college community so special."

If all of this sounds in line with the philosophy of the Berry Center, well, clearly the Berrys think so, too. Amyah Cezares, an incoming first-year student from Miami, found Sterling after reading Wendell Berry and googling "sustainable agriculture."

Mary Berry told Seven Days, "[Sterling's] program is about repopulating the abandoned countryside." According to Patterson, while only 20 percent of admitted students are from Vermont, 40 percent of alumni stay in-state to live and work.

Among those who stayed is John Smolinsky, a 24-year-old Richford, Vt., native who graduated in 2014. He majored in sustainable agriculture with a minor in draft horsing. Smolinsky now lives in Stannard, where he works for Black Dirt Farm and runs his own company, Earthbound Forestry Services.

Smolinsky eagerly praised the quality of the relationships that grow between students and professors at Sterling. "[They] transcend into life after college," he said, citing his draft horse professor, Rick Thomas, as an "endless resource."

Another grad who didn't stray far is Hannah Fleischmann, who graduated in 2012. Originally from the suburbs of New York, she is currently doing grant-funded farm-to-school integration in Tamworth, N.H.

Sterling's approach seems to be working: "We've seen a pretty dramatic increase in prospective students," Patterson said. Just yesterday, the school announced that the environment-focused Sierra magazine had ranked it the No. 3 "Cool School" in the U.S.

It's unlikely that Wendell Berry is big on school rankings, but he did give some praise of his own on Saturday. Known for both his clear manner and his reluctance to appear publicly (or give interviews), he offered this before reading two poems: "I like it here."

The original print version of this article was headlined "Green Alliance"