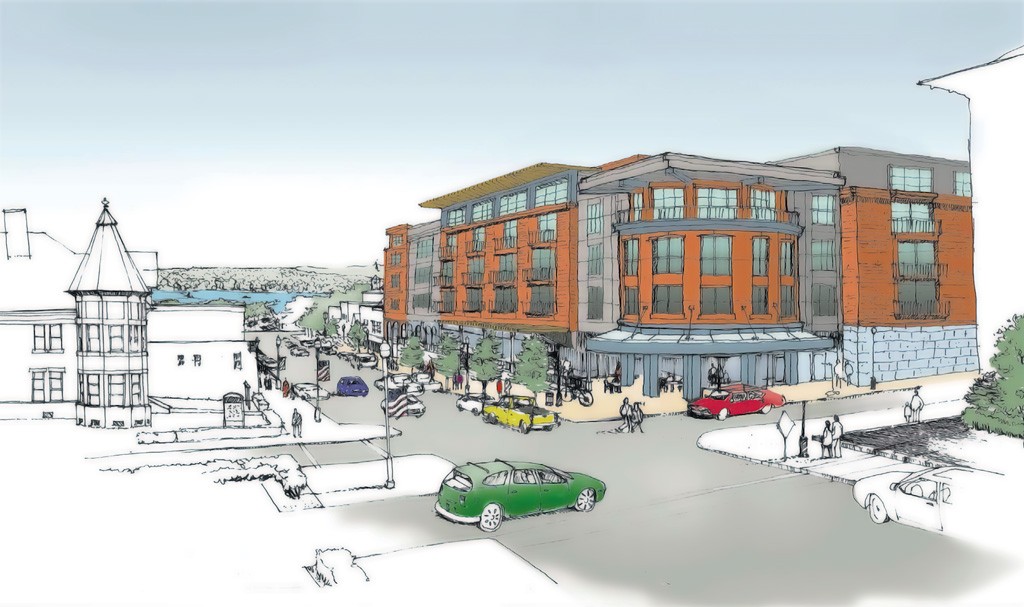 In March, wrecking crews demolished one of four commercial blocks in downtown Newport. Where a four-story apartment and commercial buildings once stood, only cellar holes remain. The demolition, by Jay Peak Resort president Bill Stenger, was touted as a key step toward the economic rebirth of this city on the shores of picturesque Lake Memphremagog, just miles from Canada. A colorful banner tied to a chain-link fence around the property known as Renaissance Block hints at a huge project to come.

But on closer inspection, the banner is missing something: any mention of future plans. There is no "coming next" or "future home of" notice — only photos of the block in the decades before it became just a hole in the ground.

The lack of progress over the past five months is another reason that a growing number of Stenger skeptics are worried he won't fulfill his bold promises.

Locals know that another of Stenger's proposals — to build a downtown Newport marina and conference center — was abandoned last year before a single shovelful of dirt was moved. They have seen the news of an ongoing U.S. Securities and Exchange Commission inquiry into several projects Stenger is funding through the federal EB-5 immigrant investor program.

The future of the Renaissance Block is now the talk of Newport. Stenger had pledged to replace the dilapidated space formerly known as the Spates Block with a $70 million, mixed-use project featuring hotel rooms and retail and office space.

Opinions are split on whether Stenger's plans will ever come to pass. Some expect his ambitious, $750 million economic development initiative, which includes projects at Jay Peak and Q Burke Mountain Resort, to come crashing down. They have little hope that the hole in their downtown will be developed anytime soon.

"I don't think so," said lifelong resident Monique Charland. "It's an eyesore. They tore it down, and it stopped. You never see bulldozers or anything."

City officials and local business owners, though, evince an almost worshipful belief in Stenger. They describe him as a longtime local who, instead of picking up stakes and moving elsewhere, is working to improve the neglected region he's called home for three decades.

"I'm not nervous," said Newport Mayor Paul Monette. "I believe in Bill. I'm not worried. I don't think he would do anything to hurt the community. It will come through. I'm positive."

Most everyone agrees that Stenger's projects represent the best chance — and perhaps the only one in the foreseeable future — for significant economic development in an area that has historically lagged behind the rest of the state.

"Obviously, it would be huge for Newport," said Steve Brault, owner of Newport Natural Market and Café. "If you did a demographics study, it would tell you not to open here."

The city of 4,500 has lost about 500 people since 2000. Because it has relatively few successful businesses, it has one of the highest local tax rates in the state. Its unemployment rate is 6.8 percent, almost double Vermont's statewide average.

Newport is the closest thing the Northeast Kingdom has to a big city. Visitors find a couple of cafés and bars and a hip local foods center. A Maplefields market and gas station recently opened, and a UPS store is under construction. So hungry is Newport for business that even many local merchants say they are eager to see construction of a long-planned Walmart in nearby Derby.

It wasn't always this way. Newport once thrived as a vital railroad crossroads into Québec, with a booming lumber industry, factories and a lake that drew steady streams of tourists. The city boasted the largest dance floor in New England — Louis Armstrong once played there — and two grand hotels.

But the hotels and dance hall have long since been demolished, and the trains run infrequently now. A few storefronts, including a 10,000-square-foot office building across the street from the Renaissance Block site, remain vacant.

"That was a time when this little city was humming," said Stenger. "These projects are going to really inject some energy into the downtown."

Perhaps to encourage him, a number of storefronts have displayed posters that read: "Thank you, Bill Stenger and Associates, for a gleam in our eyes and a twitter in our hearts for the next great step in the future of Newport City."

Lincoln Brooks, the co-owner of Newport Jewelers, and a few other local merchants conceived of the signs. They are eager to defend Stenger's plans in the face of mounting concerns.

"Some people were like, 'You're kidding.' But he's trying. He's really trying. We wanted to thank him for trying to help Newport," Brooks said. "He's trying to bring it back. He's not running away. [The projects] are going to bring people. People will bring jobs. Jobs will bring customers. It's coming. Bill said he was going to do it."

"It's a beautiful town, [but] it's never going to go back to what it was in the past," she said. "There's nothing to hold your kids after they get out of school, unless you farm. It's a quiet town. Mr. Stenger is doing a great job. You have to understand, it takes time. It's just taking a little more time than they anticipated."

How long? To build what Stenger has publicly described — a mix of retail and apartments — will require permits and approvals from both state and local regulators, all of which can take years to obtain. No plans are filed at city hall, and officials there say they aren't expecting to see any soon.

Stenger said he hopes to submit a business plan to the state later this month to begin the process of seeking EB-5 investment in the project — a timeline that could result in construction next summer. But delays at the state and federal level might derail things.

State permits for the demolition of the block stipulate that Stenger turn the land into a public park if construction has not commenced by 2017. But a park won't bring tax revenue or jobs.

Stenger remains confident. And Newport officials are following his lead. "We want to encourage this," said Laura Dolgin, Newport city manager. "We realize there's ebbs and flows. Bill has been honest with the community. Obviously, we're human, so it's in the back of our minds, but you hope. We're trying to look at the glass as half full."

None of the glasses looked that way to the regulars gathered last week at Jasper's Tavern, a bar across the street from the demolished block. Asked what they think will come of the Renaissance Block, the replies were swift.

"Absolutely nothing!" one exclaimed. They all chuckled knowingly.

"When it came down, I said, 'Nothing is going in there for a long time,'" said Gerry Letourneau. Then he ordered another beer.