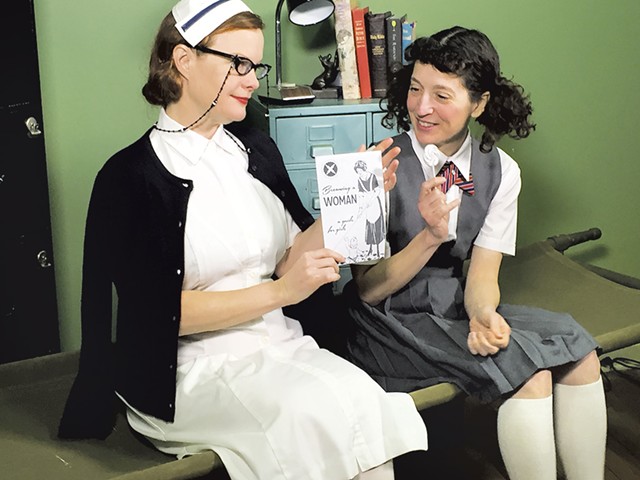 Spending a half hour with even three members of the sketch comedy group Stealing From Work feels like having an improv sesh with highly talented comedians. Marianne DiMascio, the group's cofounder and self-proclaimed leader, is constantly cracking jokes and whips out a notebook to jot down any bit of conversation that could become a sketch. Angie Albeck plays the straight man, her calm standing in stark relief to DiMascio's zany personality, only to hit you with a one-line zinger that leaves you in stitches. Troupe member and filmmaker Kevin Christopher sips his coffee and pretends not to know either of them.

These three characters are part of a larger ensemble with a rotating cast that produces a sketch comedy show once a year, usually in February. Recently, the members of SFW decided to find out what it would take to turn one of their sketches into a film. The result is a clever, laugh-out-loud funny and — though it's set in the 1950s — extremely topical short called "Becoming a Woman."

Posted on SFW's Facebook page, the film is a black-and-white mock informational guide for girls on the brink of womanhood. It features a young girl named Sally, played by DiMascio, who skips into the school nurse's office wondering about "men-stru-ation" and other changes happening in her body. Nurse Jenkins, played by Chris Caswell, calmly takes out a brochure commissioned by the "U.S. Department of Homemaking Education," which explains that menstruation occurs during a full moon, when the "irresistible pull of the moon planet" affects a woman's "inside parts." The film goes on like that, full of helpful information to guide Sally through this exciting but confusing time in her life.

Though the troupe first performed "Becoming a Woman" live in 2012, the members have since reimagined the sketch based on current events. Originally, DiMascio recalls, "The sketch had a heavy focus on the state of Arizona, with a lot of references to all kinds of interesting and fucked-up stuff that was being said around that time, like 'Conception starts at menstruation,' that it was OK for a doctor to withhold information from a patient for a woman's own good ... We were listening to it and thinking, This stuff feels so archaic; it feels like it belongs in the '50s."

"Then Donald Trump comes on the scene, and we were dealing with the same issues all over again," DiMascio continues. Just when we all thought we were beginning to move beyond anachronistic sexist language that goes against the most basic science, the real estate mogul/reality television star conjured up the attitudes of the 1950s (albeit far more crassly). Add the fact that DiMascio is still dealing with having missed the single day of sex education in her elementary school years and — voilà! The troupe felt a pressing need to revive the "Becoming a Woman" sketch.

With an emphasis on how womanhood will look if it continues to be defined by politically conservative white men, SFW's satire is, unfortunately, as relevant today as it has ever been.

Working with film brought its own set of unique challenges, distinct from those of live theater. "In order to make a quality short film, you need to be detailed," DiMascio explains. "Onstage, our actors are in black clothing, and there are no props. But for the film, we spent months looking for an authentic cot from the 1950s. And you can't even see it!" Christopher is quick to point out that viewers can sense the cot is there.

Nurse Jenkins explains that menstruation occurs during a full moon, when the "irresistible pull of the moon planet" affects a woman's "inside parts." tweet this

DiMascio says SFW intends to turn many more of its nearly 80 sketches into short films — an endeavor assisted by Saints & Poets Production Company, of which Christopher is cofounder.

"I was pleasantly surprised by how well our work translated into film," DiMascio says. "It started as a web sketch, but after the rough cut" — she looks to Christopher for confirmation that, yes, that is the correct term — "we realized that it was more like a short film." SFW will submit "Becoming a Woman" to the Vermont International Film Foundation's Vermont Filmmakers' Showcase, and it hopes to do the same with future creations.

What other sketches can we look forward to seeing on film? A Mary Poppins who helps adults in the bedroom, and an athlete vying for the last spot on the Olympic Kegel Team, to name two.

As DiMascio googles "women with strong Kegels" on her phone, she reiterates that her troupe always aims to poke fun either at themselves or at people in power. Their intention is never to be cruel, but to laugh at the ridiculous aspects of modern times.

"And nurses," Christopher adds, "Because fuck them. Just kidding. Sexy nurses are fine."

If the troupe's next ventures are as funny as "Becoming a Woman" — or as an hour in the presence of SFW members — local comedy fans are in for a treat. Meantime, catch the group's live performance in July at the Green Mountain Comedy Festival.