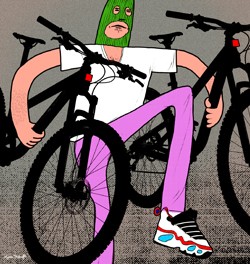 It wouldn’t surprise Gavin McCormick if the teenagers snooping under his porch two weeks ago were the same ones who stole his gray $1000 Specialized Rockhopper mountain bike last spring.

On neither occasion did McCormick actually see the perpetrators. But thanks to a 24/7 security camera he rigged up after the initial theft, he now has grainy video of what appear to be two young, white men with flat-brimmed caps scoping out the bottom side of his porch on North Avenue — exactly where his bike had been resting before it was stolen several months earlier.

“It seems like what’s happening, at least from the pictures I have of the guys, is they were probably just going up and down the street and seeing what was unlocked,” McCormick says. “Probably bikes are the main things that aren’t locked up.”

McCormick works as an electrical engineer, a job he got after graduating from the University of Vermont in 2009. Ordinarily, he says, his bike would have been locked. But he was too tired to make the effort that evening. Once he realized his ride had been stolen, he filed a report with the Burlington Police Department and posted a message on his Front Porch Forum asking neighbors to keep an eye out for it.

But neither effort brought his bike back, and after a friend had some sunglasses stolen from his car while visiting several days later, McCormick decided to set up surveillance. He has since sent the image to Burlington High School for identification — the “thieves” looked like teenagers — and improved the resolution on his camera. The goal, he says, is to get a better image of the two that he can pass along to the police — “or, to just bring them to the police myself.”

McCormick may sound like a mild-mannered vigilante, but these days, he’s not the only one with stolen-wheel woes. In the same week those guys stumbled into the crosshairs of his camera, seven people posted to the same Front Porch Forum about pilfered bicycles: five had recently had a bike stolen, while others were posting tips about preventing bike theft. Burlington police also weighed in, issuing a recommendation to residents to lock their bikes or store them inside.

This summer, 127 bike thefts have been reported to the city police department, up from 92 during the same time period last year. Lt. Scott Davidson suggests at least part of the reason for the increase in theft reports may be a new online reporting system.

Even so, the perennial migration of students to area colleges this month may portend an imminent bump in the thieving. During this month in 2012, the University of Vermont police department received 30 reports of stolen bikes, almost triple the numbers reported in August or October. In September 2011, UVM police reported a similar, if less dramatic, spike.

Every bike shop interviewed for this story instructs customers on the importance of properly locking bikes. But after one week in which North Star Sports — a retailer of new and used bikes on Main Street — had to turn away eight people trying to sell them cycles that appeared stolen, the owners of the store made a bid for official help.

Appearing before the Burlington Police Commission last Tuesday, August 27, Pat and Jay Miller asked the department to reinstate a resource that used to be available to new bike owners: a citywide bike registry. A return to that system, they argued, might help prevent thefts.

For several decades, the city required new bike owners to register their names in an index maintained by the police department. In turn, the owners received a sticker — at one point, even a license plate — for their bikes. About four years ago, though, the city decided the system was not an effective way to track bike thefts because few bike owners registered their rides. Looking at other cities that had abandoned similar systems, Burlington decided to do the same, passing a municipal ordinance to eliminate the requirement.

North Star Sports now electronically stores the names of their customers and serial numbers of the bikes they purchase. But citing a time when their computers crashed last year, Pat Miller now believes that an old-fashioned paper trail may be the way to go.

“We really felt it cut down on the number of bikes being stolen,” says Miller. This year, she adds, the store has seen an “extraordinary” number of used bikes of questionable provenance.

Miller says a retailer’s role is not just to sell bikes but to “make things better for individuals that have spent their hard-earned money to purchase a bicycle.” These days, she told the commission, that should include keeping those bikes off the streets, where they are “often traded for drugs. We know that. We see that every day being done downtown.”

If Burlington police had access to a record of bike ownership, the Millers reason, it might streamline the process of getting a recovered bike back to its original owner.

Responding to the Millers’ request, police chief Michael Schirling said that his department used to tap an online database of stolen bikes created by UVM with Local Motion, a nonprofit organization formed in 1999 to promote biking and other nonmotorized modes of transportation. Police officers filed information to the database about bikes reported stolen and instructed residents on how to use the reporting mechanism themselves. Local Motion then made the information available to bike shops in the greater Burlington area, so they could be on the lookout for stolen wheels.

But about a year ago, says Jason Van Driesche, Local Motion’s director of advocacy and education, the nonprofit group and the city police department concluded that the online registry was not really working.

“We hadn’t seen people here registering bikes, really, for years,” Schirling explained at the commission meeting, adding that thieves make a habit of scratching out serial numbers. Because of that, he said, the department instructed its officers to stop using the system.

Nonetheless, Schirling did not dismiss the Millers’ request. “We’re certainly not opposed to having a partnership with the bike shops to come up with an online registry,” he said. “The key is that it has to be low maintenance.”

That may be easier said than done. “Low maintenance” are not words Van Driesche associates with his experience of running the online registry over the last few years.

“When it works, it’s great, but it crashes a lot,” Van Driesche says of the bare-bones online resource, which is basically a Google spreadsheet on a password-protected page. “One of the lessons we’ve learned in the process is that it’s relatively tough to create something that is cheap and simple for a wide range of people.”

The university police still use the resource as a way to keep records of stolen bikes, complementing their own online crime-reporting system. Stores in Burlington use it, too, but he acknowledges that they sometimes face technical issues when trying to do so.

Van Driesche says a registry can’t replace the common sense that dictates where and how to store bikes securely.

Using the term “low-hanging fruit” to describe poorly protected wheels, he notes, “Really, the most important thing to reducing the chances of a bike getting stolen is to lock it up really well — not with a weeny little cable lock — to something solid.”

Van Driesche warns against the belief that police aren’t doing enough to stop bike theft, adding that he has been conducting trainings for officers all summer in bike-lock safety, and they’ve been conducting public safety trainings.

“We have done a better job at encouraging people to report in more detail their bikes, serial numbers, etc.,” Davidson says, explaining that defining your bike as a “blue Trek” doesn’t give officers much to work with. He recommends sending photos and mentioning details such as “the Magic Hat sticker on back.”

Although the department has stopped using the Local Motion registry, it does maintain an internal database of stolen bikes that allows civilians to report thefts online.

Running one of the biggest used-and-refurbished bike shops in the area, Eames says there are red flags when a person tries to sell him a stolen bike: a frame that doesn’t match the seller’s height or that supposedly came from a store he knows doesn’t carry the model.

“It’s a big problem, and it’s really not getting the attention it deserves,” Eames says of the response to the bike thefts in the area, imagining the backlash that would accompany comparable rates of car theft.

He recalls a time when his shop recovered a bike that had been stolen from one of the employees of Skirack, another shop that sells bikes on Main Street. Eames called the Skirack worker and a police officer to the store to meet the man who was trying to sell the bike he said he had bought five weeks before.

“We had recovered the bike. We had the owner, the seller and the police,” Eames says. But after talking for a while, the officer let the seller go. “We’ve had guns, drugs and other problems,” Eames acknowledges of the problems police must contend with regularly — explaining that he isn’t pointing fingers. “But it was odd to see him go.”

Eames recognizes that bike theft, generally speaking, is “a disorganized crime, a crime of opportunity and probably drug related” and not part of some large, dangerous, criminal syndicate. What he’d like to see is the addition of more bike racks and some kind of an orientation for new students in the area about the proper way to lock a bike. Maybe, he suggests, an AmeriCorps VISTA volunteer could fill that role.

Schirling compares his department’s approach to bike theft to that of any other crime but concedes that it doesn’t always rank at the top of the list.

“Things are certainly prioritized in terms of severity day to day, but all crimes in which there are solvability factors, evidence or leads, are fully followed up on,” he says.

According to Megan O’Neil, a detective in UVM’s police department who has helped implement the registry with Local Motion, finding thieves isn’t simple.

“I would say that bike thefts are one of the hardest things to catch,” she says. “People will sell parts just on the street for 10 bucks or stuff, and that’s hard to track.”

Seven Ways to Keep Your Wheels

2. If possible, store your bike inside.

3. Use a lock that is strong and unbreakable.

4. Use a lock that can fit around your frame and front wheel.

6. Take a photo of your bike and keep detailed info, including your bike’s serial number, to share with police if it is stolen.

7. Wear a helmet, because you can’t protect your bike without your dome.