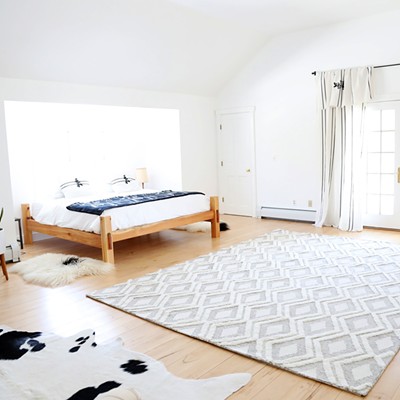 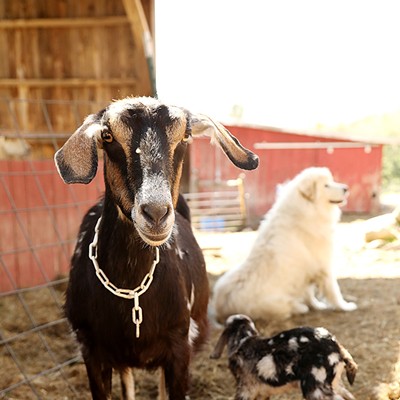 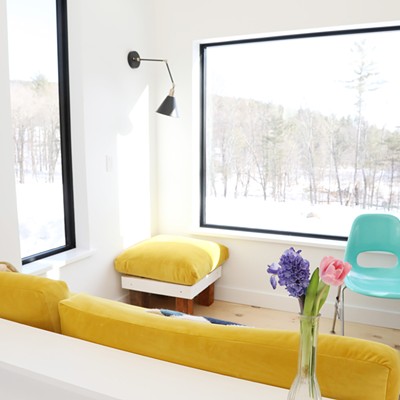 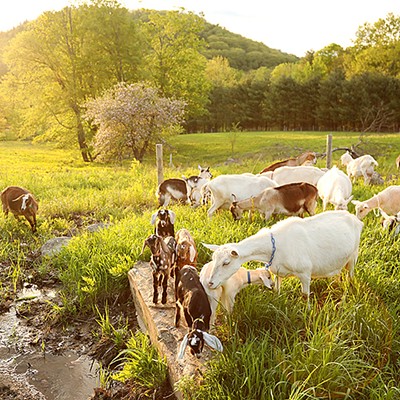 Goat kidding season begins in earnest in April, when those tiny, unruly creatures — all ears and knees and hooves — emerge into the world determined to sow as much joyful chaos as possible. On Big Picture Farm in Townshend, where many of the 45 goats are currently expecting, the babies come first as a trickle, and then as a flood.

"The week after their due date is normally when we have one of those crazy days where there's a billion babies," said Louisa Conrad, who runs the farm with her husband, Lucas Farrell. They make goat's-milk cheese and caramels and offer luxurious farm stays in three different buildings.

The couple moved to Townshend 11 years ago to work as caretakers for the farm's previous owners, Ann and Bob Works, who operated a sheep's-milk cheese business. Conrad and Farrell — an artist and a poet, respectively, who'd both attended Middlebury College — had previously apprenticed at Salisbury's Blue Ledge Farm to learn the ins and outs of milking and cheesemaking. Over the last decade, they've bought the 100-acre Townshend property in pieces, finally becoming full owners three years ago. Now Conrad and Farrell live there with their two daughters, the goats, chickens and a couple of extremely fluffy livestock guard dogs.

"Part of our mission is to spread the word on good animal husbandry." Louisa Conrad tweet this

Available for rent on the property are a sprawling farmhouse, a two-bedroom barn and a brand-new tiny house. Originally built in 1790 and since renovated, the farmhouse can sleep up to 16 people in spacious rooms with loads of light. It features beds built by a local timber framer, cozy window seats and other nooks and crannies, and quirky bathrooms — including one that contains a perfectly circular Japanese soaking tub.

Conrad said that, pre-pandemic, the farmhouse was often booked for retreats, family reunions and elopements. In the last year, families have booked it for longer stays to work remotely or quarantine in the isolated corner of southern Vermont. Social distancing is easy at Big Picture Farm, and guests are welcome to explore the farm's acreage and spend time with "the ladies," as Conrad calls the goats.

"They're so wonderful, and there's not a lot of chances to really go in with goats in a non-institutional setting," she said. "Part of our mission is to spread the word on good animal husbandry."

The goats are a mixture of Alpine, Nubian and Saanan breeds. They love a good chin scratch. Many of them are pregnant, but Conrad and Farrell keep their retired goats around, too. "Just because they're big and fat does not mean they're pregnant," Conrad said with a laugh. At the end of kidding season, they'll keep five or six babies and sell the rest.

The family also raises chickens and maintains a garden, an orchard and berry bushes on what Conrad said is a "homestead scale." Every year, they raise three pigs to butcher. Guests are welcome to request eggs and pork for their stay.

Last year, Conrad and Farrell added a smaller building, called the Colt Barn, to their Airbnb offerings. And in September, they broke ground on the Solar Cabin, a well-designed miniature space with a loft bedroom, situated down the hill from the other houses. It's right next to a large solar panel installation, hence the name. Depending on the season, the Solar Cabin and Colt Barn may be used for staff and not available for rental.

Buying Big Picture Farm in three different real estate transactions allowed the couple to take on only what they could afford and manage at the time. Conrad calls the roundabout route to full ownership "really unique."

"Land transfer is such a tricky thing, especially right now in the United States with so many old farmers," she said. "So we were really lucky that [the previous owners] were willing to work with us and help us."

The pandemic has forced many small farms to shift their focus to direct-to-consumer sales. Conrad said that, while they used to rely on distributing their cheese and caramels to some 1,400 stores across the country, their online sales jumped enough to make up for the decline of in-person shopping.

If Conrad ever has any doubts about farm life, seeing her 4-year-old interacting with the animals wipes them away. "This is definitely the best way for her to be growing up," she said.

Bringing in guests, beyond providing income, lets her share that feeling with other families.

"The last few people in the farmhouse had three kids ... I would come in in the morning, and one of their girls was up in the hayloft, like, cuddling with a kitten," Conrad said. "It's nice to see people really be able to be independent and enjoy the farm."

The original print version of this article was headlined "Field Day | Stay in style, goat-adjacent, at Big Picture Farm"