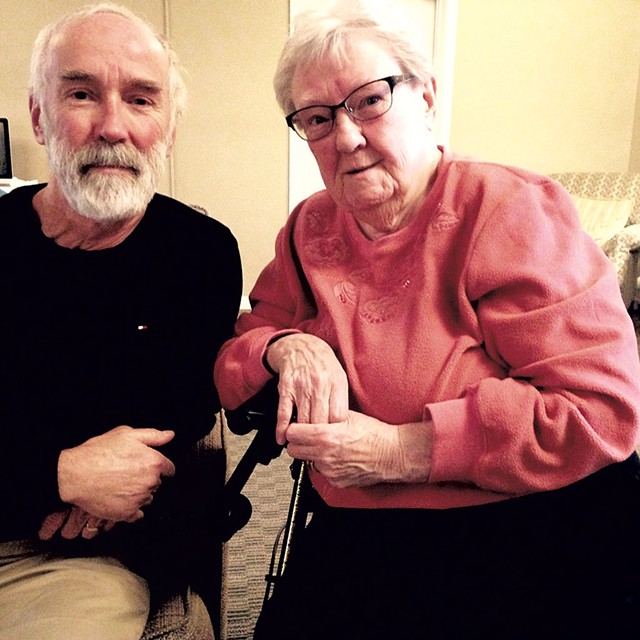 Barbara Deslaurier sat in the cozy library at her senior living complex last Thursday wearing a relieved expression. The 89-year-old grandmother and dozens of her neighbors, many of whom use walkers, had just attended a meeting in the dining room with Burlington attorney Douglas Wolinsky.

Wolinsky had been appointed to run the South Burlington facility, Allenwood at Pillsbury Manor, and two others after the state seized temporary control of them on November 9. State officials cited "food insecurity" and a host of management issues. A judge entrusted a fourth facility to Wolinsky last week. About 250 residents live in the properties, which have the same absentee owner, Dallas-based East Lake Capital Management.

Wolinsky delivered good news, according to Deslaurier. He told residents that Allenwood would address various problems and resume normal business practices — such as collecting rent. "It's reassuring," said Deslaurier, who had not seen an invoice for payments on her one-bedroom, $3,365-a-month apartment since February.

Such baffling lapses also affected the other facilities Wolinsky is now running: Pillsbury Manor South and Harborview in South Burlington, and the Homestead at Pillsbury in St. Albans.

The crisis has triggered debate about whether the oversight of residential facilities for Vermont's senior population is sufficient. Were there any warning signs that foreshadowed the meltdown?

When East Lake purchased the properties 18 months ago, there was no state review of the transaction. While Vermont regulators do oversee proposed purchases of nursing homes, the state does not get involved when residential care homes such as the Pillsbury properties are sold.

That's a problem, said Rep. Ann Pugh (D-South Burlington), the chair of the House Committee on Human Services. It's time for the state to review ownership transfers of residential care facilities just as it does for nursing homes, according to Pugh, adding that when the legislature convenes in January, it will be important to ask: "Is there something we could have done differently?"

Almost 19 percent of Vermonters are older than 65, compared to 15 percent nationally, and the need for senior housing is projected to increase as the population ages. Vermont should broaden oversight to include residential care transactions, said Greg Marchildon, AARP Vermont's state director. "We need to hold all of these facilities to a very high standard."

The media glare is unfamiliar at Allenwood and the other properties. The former owners, the Larkin family, typically addressed any problems the state pointed out. John Larkin, a Burlington resident, had been one of Chittenden County's most prolific builders before he died in 2013.

That same year, Deslaurier moved into Allenwood. For several years it was a pleasant, stable place to live, she says. That changed after East Lake purchased the Pillsbury properties in May 2017. Nine months later, in February of this year, residents began complaining to state officials. They said their rent checks weren't being cashed. The staff was thinning. Bills apparently went unpaid, a popular hairstylist stopped coming to Allenwood, and some staff members were personally purchasing food for residents at Costco, according to Vermont Attorney General T.J. Donovan. The problems prompted the Vermont Department of Disabilities, Aging and Independent Living to seek the receivership arrangement.

While seniors and their families might not distinguish one type of elder care facility from another, state law does. They are divided into categories and subject to different sets of regulations.

Vermont has 38 nursing homes with 3,025 beds. State and federal laws regulate how they operate, and they are required to provide an intensive level of medical care. They can accommodate the sickest individuals, including those who require ventilators and feeding tubes.

But the feds don't regulate Vermont's 116 residential care homes, which have nearly 2,500 residents. The homes provide room, board, medication management and assistance with personal care such as bathing. They generally don't accept people with acute illnesses. It's up to the state to oversee these homes, as well as the 13 assisted living facilities in Vermont, which have 765 apartment units meant for more independent seniors. These facilities must offer a private bedroom and bath and a lockable door; the supportive services are more limited.

One more type of senior housing — often referred to as independent living — is not regulated by the state, because the landlords do not provide care to residents.

That's why Harborview in South Burlington, which falls into this category, was not part of the initial receivership action in Vermont. The state successfully sought to add Harborview last week, noting that it was in the same corporate family and generated billing complaints similar to those at the other properties.

Should the state regulate independent living, too? That's like asking if a regular apartment building should be regulated, suggested Monica Hutt, commissioner of the Vermont Department of Disabilities, Aging and Independent Living. Her answer: No.

"I think it's important to really clearly define what the role of the state is and isn't in the lives of the older Vermonters," she said. "I think that's something we would want to be very careful of."

The crisis has triggered debate about whether current oversight of residential facilities for Vermont's growing senior population is sufficient. tweet this

Out-of-state corporations increasingly control one segment of Vermont's senior care market: nursing homes. National company Genesis HealthCare owns 10 of the state's 38 nursing homes; most of the others are also owned by out-of-state entities, according to Pamela Cota, licensing chief at the state department of aging. The proposed sale of three locally owned nursing homes in the Northeast Kingdom to Connecticut-based Bear Mountain Health Care is under state review, she added.

Nursing home consolidation is a national trend and draws mixed reviews. Supporters say big companies are better equipped to navigate complex regulations and tap deep pockets for care. Critics say the companies invariably economize, spread assets in a dizzying array of limited liability companies to protect themselves from litigation, and profit through Medicaid and Medicare.

The debate hit home in 2015 when a group of New York investors purchased the 67-bed Brookside Health and Rehabilitation in White River Junction. Over the next two years, the state cited the nursing home for multiple health and safety violations. The federal Centers for Medicare & Medicaid Services announced it would stop funding the facility and it closed in 2017.

Vermont owners of facilities might be more responsive to complaints, Rep. Pugh suggested. Andrew White, the owner of East Lake, often failed to act after managers of the four Vermont properties called him about utility shut-off notices, staffing woes and other problems, according to the 240-page Vermont court filing seeking receivership.

Earlier this year, the legislature passed a law that transferred oversight of nursing home sales from the Green Mountain Care Board to the Agency of Human Services. Leaders of the board, which regulates hospitals, had pushed to have Human Services, which oversees nursing homes, review the transactions.

Under the old review criteria, buyers had to show they had the financial capacity to run a home, meet state licensing requirements, justify demand for any new beds and meet other goals. As part of the law that took effect in July, the agency is developing a new set of standards to review sales. A committee will report to the legislature in January.

Pugh said she anticipates a "robust" discussion about reviewing sales, and not just for nursing homes. The fiscal strength of buyers and their records with other properties should be considered, whether they are buying a nursing home or a residential care home, she suggested.

The Vermont AG's office says East Lake properties in other states have generated complaints similar to those in Vermont. Receivership actions were filed in October involving its properties in Texas and Tennessee. Most of the problems cited are from 2017 or 2018, after East Lake's Vermont acquisitions.

In any event, Rep. Anne Donohue (R-Northfield), vice chair of the House Committee on Health Care, wants to study the recent situation. "I think the legislature should review what happened here, what went wrong, how did we get here and does it tell us that we need to make changes to protect residents," Donohue said.

Commissioner Hutt believes that the system worked properly. Complaints were investigated and, after the owner failed to properly respond, the state stepped in, she suggested.

Public records and court documents show that the state's response to the complaints gradually accelerated over the nine months between February and November. Investigators with the department of aging stepped up visits to the properties starting in the spring and ordered corrective action for various problems. In October and early November, the state banned new admissions at two of the facilities due to their failure to correct deficiencies for which they had been cited in May and July. In late fall, problems at the properties grew "exponentially" worse, according to court papers, with nurses failing to show up for shifts and food reserves down to two days at some of the properties. That prompted the receivership.

"As traumatic as this whole situation has been for everyone ... our regulatory process worked well in this instance,'' Hutt said.

She does not believe that state review of residential care home sales is needed. "I'm not really convinced that it would prevent the kind of situations that we are seeing right now," Hutt said.

It's uncommon for the state to take control of a residential care facility through receivership. It's happened only twice in the last five years, and in both cases the properties were small homes with fewer than 20 residents. One of them, Cota's Hospitality House in Barre, closed in 2016. The other property also closed, Hutt confirmed.

It isn't clear what led to the problems at East Lake's properties. White did not return calls seeking comment. His attorneys, Lisa Shelkrot and Peter Langrock, told a Vermont Superior Court judge in Montpelier last week that they would seek to put the properties back under East Lake's control. White can satisfy the state's concerns, and he shares the goal of making the homes safe and reliable, the lawyers said. A hearing is set for December 10.

Hutt tried to allay Pillsbury residents' fears that their homes would be closed, expressing confidence the receiver would stabilize the facilities.

That matters to Deslaurier. The mother of five, grandmother of 16 and great-grandmother of 27 moved into Allenwood with her husband. The couple, who had spent much of their lives in Bolton, wanted to live in a place with meal service, activities and a button they could press if they needed assistance.

The two were glad they chose Allenwood. Deslaurier, whose husband died in 2015, still feels comfortable there. She has never felt unsafe. And while the food wasn't as good lately and choices were lacking, she said she never went without. Staff are fabulous, she added. Allenwood is home.