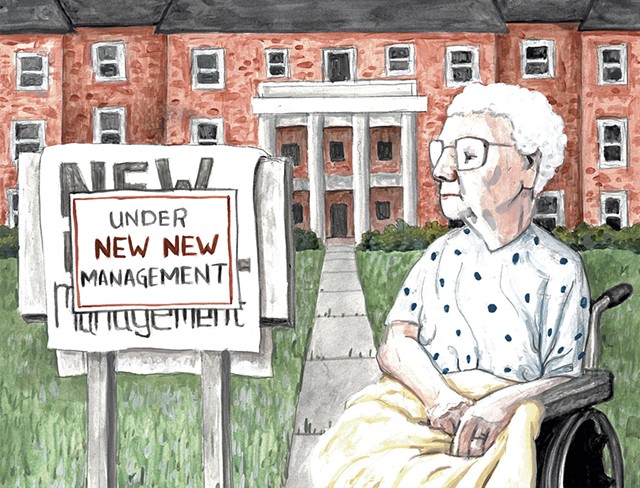 Vermont officials appear skeptical of an application from a group of New York men who want to buy five of the state's largest nursing homes.

During a hearing last Thursday, Human Services Secretary Mike Smith and agency staff pressed the owners of Priority Healthcare Group on deficient care and short staffing at their existing homes, including Barre Gardens in Vermont, and probed the group's complex and shifting ownership structure for the homes they seek to run.

Over the course of nearly two hours of questioning conducted over videoconference, Agency of Human Services officials seemed underwhelmed by explanations that Priority owners David Gamzeh and Akiva Glatzer gave for their homes' low-quality rankings. Smith struggled to decipher financial information the men had provided, as the secretary and his staff homed in on a potentially pivotal question: Who would actually control the homes?

That question was the subject of a Seven Days investigation earlier this year. The newspaper examined Gamzeh and Glatzer's ties to a larger network of nursing homes owned by Ephram Lahasky, whose facilities in western Pennsylvania have faced civil lawsuits and criminal investigations. Lahasky is not listed as an owner on the pending Vermont application — but his wife was, until state officials and Seven Days began scrutinizing her role.

Gamzeh and Glatzer repeatedly told state officials last week that the power to manage the nursing homes would rest entirely with them. "We control anything and everything that happens," Gamzeh said.

Yet their assurances did not square with the written terms of their loan, officials said.

At stake is nearly 20 percent of all nursing home beds in Vermont, spread across some of the state's most troubled facilities. The five homes involved in the proposed transfer — Burlington Health & Rehab and similarly named homes in Bennington, Berlin, St. Johnsbury and Springfield — were previously owned and operated by Genesis HealthCare, a large national chain.

Each ranks "below average" or "much below average" on federal quality scorecards. Their sale is part of a nationwide buying spree by opaque private equity investors that critics say has led to poorer care for residents.

Changes in ownership of nursing homes, a heavily regulated industry, are reviewed by the State of Vermont to ensure that potential buyers have adequate "financial and administrative capacity" and will provide "high-quality services and a safe and stable environment" for residents, state law says.

Genesis struck a deal to sell five of its nine Vermont homes to a group of private investors, including Gamzeh and Glatzer, in October 2020 amid a pandemic-fueled financial pinch. The deal was worth $46.6 million, according to a U.S. Securities and Exchange Commission disclosure.

The sale of the real estate to a set of buyers that includes Gamzeh and Glatzer, which is not subject to state review, went through last year. Since then, the duo's separate management company, Priority Healthcare Group, has been running the homes through a contract with Genesis. Priority has already shuffled leadership at the homes and rebranded them with new logos and names.

But Gamzeh and Glatzer need the state's blessing before they can operate the homes directly. Denial of their application could plunge the facilities into further instability, at least in the short term.

In a statement to Seven Days after the hearing, Gamzeh and Glatzer said they'd made significant investments over the last year to improve the five homes, including $300,000 on wage increases and recruitment and nearly $900,000 on facility upgrades. If the state approves their application, they wrote, "we pledge continued investments in our facilities and our staff and to strive every day to take the very best care of those entrusted to us."

Before July 2018, similar nursing home transfer applications were reviewed in public by the Green Mountain Care Board, which conducts hearings and posts relevant documents online. The Vermont legislature scrapped that process and passed the job to the Human Services secretary until lawmakers could enact a better system. A working group recommended a new permanent process in January 2019, but the interim arrangement, now in its fourth year, persists.

Last week's hearing was not advertised and provided members of the public no chance to comment. Only after Seven Days submitted a written request to attend did the Agency of Human Services grant the newspaper access.

Under the original purchase application in February, Lahasky's wife, Akiko Ike, shared equal ownership with Gamzeh and Glatzer and was listed alongside them as an applicant. Lahasky was listed as a guarantor on the loan used to finance the property purchase. The buyers, however, were not required to disclose information about Lahasky's expansive nursing home holdings for the state to review because he was not named as an operator of the Vermont homes.

Lahasky has amassed a growing empire of nursing homes around the country, which grew again last month when one of his entities acquired a company that owns 7,250 nursing beds nationwide. At the time of the Vermont real estate purchase last fall, a group of Lahasky's homes in Pennsylvania was under investigation following a massive, deadly COVID-19 outbreak. In February, the administrator of one of those homes was indicted on fraud charges over allegations that the home falsified staffing records.

As Seven Days prepared to publish a story in July about Lahasky's involvement in the Vermont deal, Gamzeh and Glatzer moved to distance him from it, emails obtained through a public records request show. On July 16, one day after the newspaper sent the men a detailed list of questions to which they did not respond, their Vermont attorney, Shireen Hart, told Agency of Human Services general counsel Todd Daloz that they were "removing" Lahasky's wife Ike from the application "effective immediately." 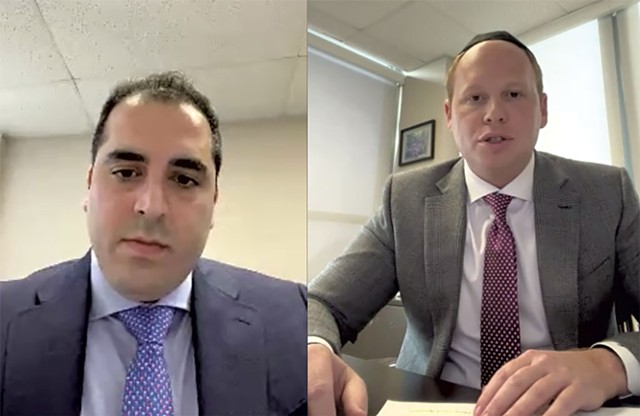 In their statement to Seven Days this week, Gamzeh and Glatzer did not directly respond to a question about why Ike is no longer an applicant. But they wrote that "the State has raised concerns about certain aspects of the application during the review process, including the ownership structure, and we have responded with significant changes."

However, as agency officials noted several times during last Thursday's hearing, Lahasky and Ike remained on key financing documents related to the purchase of the properties.

A clause in the loan agreement between the buyers and Oxford Finance, the lender, says the borrowers would be in default on their loan if Lahasky, as guarantor, failed to "remain actively engaged in the management of each" of the five homes. The loan agreement also shows, and Gamzeh confirmed, that Lahasky's wife has an ownership interest in the real estate.

Lindsay Gillette, the director of rate setting for the Department of Vermont Health Access, called the loan document "perplexing" given the applicants' claim that Lahasky has no say in the operation of the facilities. If other people do have control of the facilities, said Pam Cota, who leads the state office that inspects nursing homes, "we would need to look at them just as we looked at [Glatzer] and [Gamzeh's] background and other facilities."

Questions about the financing didn't end there. Smith told the applicants that the budgets they submitted were unclear. "I'm pretty familiar with budgets. I run a $2.4 billion operation here. And I can't read it. I don't understand it," Smith said. Same for their business plan: "I wouldn't finance it [based] on what I've seen so far."

Gamzeh and Glatzer operate more than 30 nursing homes in Michigan, Pennsylvania, Indiana and Massachusetts. They submitted information about regulatory compliance and quality of care for 25 of the homes.

More than two-thirds of those homes have only one- or two-star rankings on the Centers for Medicare & Medicaid Services' five-star scale, an indicator of poor care for residents. Many of the homes recorded serious regulatory violations in which residents were harmed, according to the application.

In 2018, a resident at one of the Pennsylvania homes was injured while being lifted by staff members who hadn't been properly trained. At another Pennsylvania home that year, inspectors found that poor management contributed to the sexual harassment and abuse of two residents by a staff member.

The Vermont Long-Term Care Ombudsman Project, which advocates on behalf of residents, pointed to those violations in an October 1 letter to Smith's office. "Given the quality data provided to the state," ombudsman Sean Londergan wrote, his program "is concerned that there will [be] no improvement in the quality of care for residents if the Applicants were to assume ownership of the five facilities."

He further wrote that it's "unclear" whether the ownership change would be in the best interest of residents.

Priority's owners offered several reasons for their homes' below average rankings, including a claim that Pennsylvania's inspection program does not score homes equitably and that the struggles are unique to each home. The group has purchased homes that are already distressed, they added, and improving them takes time.

"Some facilities have been more challenging, and it has been very difficult to get the right leadership in place," Glatzer said. "And that's not to say that we find it OK."

They also emphasized recent improvements in quality at Barre Gardens, which they have managed since 2015 and purchased in 2017. The home currently has an "above-average" rank for resident care, and Gamzeh and Glatzer said they hope to achieve similar improvements at the five other Vermont homes over time.

Cota pressed them on federal data that showed below-average staffing levels at nearly all of their other homes, but Glatzer questioned the accuracy of the data Cota cited. "The statement came as a huge surprise to me, because, to my knowledge, that's not the case," he said.

State officials didn't seem satisfied with the applicant's answers about their homes' poor ratings. Daloz, the attorney for the Agency of Human Services, took issue with their responses about each home's performance. "I think hearing that it's a one-off, or it's a location-by-location question, is not quite the answer I would look for there," he said.

At the end of the hearing, Glatzer said he hoped the state would consider factors beyond the quality scores, namely their personal commitment to turning around the Vermont homes.

"It's the people that stand behind that," Glatzer continued, "and I'm hopeful that you can see that that's who we are."

Smith asked Gamzeh and Glatzer to submit additional information for his review. A few days later, Smith announced his retirement at the end of the month. He plans to issue a decision before then.

The original print version of this article was headlined "In Whose Care?"