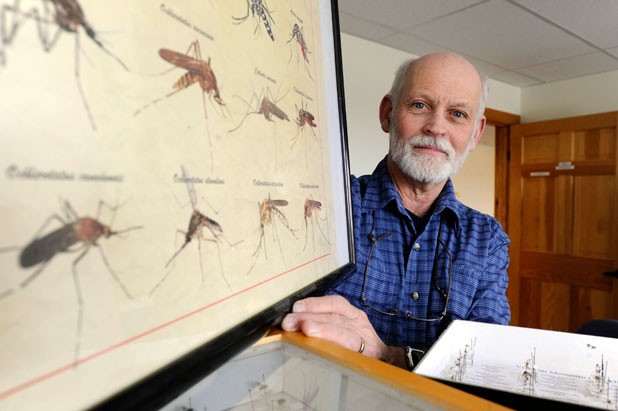 In the pantheon of least desirable jobs, Alan Graham’s deserves at least an honorable mention. Tapped to be state entomologist last February — he’s been with the Agency of Agriculture since 2001 — Graham is in charge of pest management, which often means going into Vermont’s buggiest bogs to count, catch and identify the tiny critters that sting, burrow or bite.

Graham studies hundreds, if not thousands, of insect species, both native and invasive. However, he pays particularly close attention to those that are vectors for potentially life-threatening human diseases such as West Nile virus and Eastern equine encephalitis. EEE was first detected in Vermont in wild deer and moose in 2010. It killed several domestic emus in 2011 and infected humans in 2012. Both West Nile and EEE are mosquito-borne diseases.

Graham, 64, has been into mosquitoes since he was a kid, and he began collecting them in Vermont in the 1970s. He boasts an impressive collection of the 45 species known to inhabit the state.

Over the years, Graham has identified a few invaders that have shown up inside our borders. They include Ochlerotatus japonicus, a Japanese mosquito that first appeared in New Jersey in 1999; Graham found one in Windsor in 2001. How’d it get here? He suspects it hitched a ride on an international vessel carrying old tires, which are perfect breeding grounds.

Though Vermonters complain every summer about the mosquito problem, no statewide program focuses on eradicating them. Over the years, several communities have formed mosquito-control districts — there are now three. But most municipalities leave the zapping and slapping to individual residents.

That said, Graham operates mosquito traps all over the state, which he uses to identify the next up-and-coming bug. To date, he and his staff have handled more than 1 million mosquitoes.

“I’ll be expanding the number of towns I’ll be trapping in next year,” he says. “But, if there are 4000 mosquitoes in a light trap, and you’ve got light traps in 20 towns, and you’re picking up each mosquito by the leg to identify it, you can imagine how long that takes. That’s what I do.”

What can you do? Graham offers some tips for keeping the biters at bay.

SEVEN DAYS: How does Vermont’s mosquito problem stack up against other states’?

ALAN GRAHAM: Vermont’s mosquito problem is very, very minor. Some states have enormous resources to deal with pest mosquitoes. Any of the coastline areas deal with a particular species of mosquitoes that hatches any time you get a new moon or full moon. Places like New Jersey have had mosquito-control efforts mandated for quite a number of years. California and Florida also have enormous programs. In Vermont, the program is minuscule, and the districts are very small.

SD: That’s news to me. I live in Colchester, where the mosquito problem is awful.

AG: There are certain areas with certain species that can be bad. In your area, it’s probably a species that prefers cattail marshes. Those are some of Vermont’s most abundant species.

SD: What are your projections for this summer’s mosquito problem?

AG: The National Weather Service has predicted it could be a bit wetter this summer. However even that’s vague, because, with pest mosquitoes, if we get two inches of rain it triggers a hatch of floodplain species, which are the nuisance ones. But if we get an inch of rain a week, that won’t produce a hatch. So it all depends upon how it falls.

SD: How does the state approach mosquito management?

AG: We, as the Agency of Agriculture, encourage integrated pest management. You identify the pests you want to manage — in this case, the mosquito — and use the safest product that’s most effective. We encourage the districts to use a larvacide called Bti, or Bacillus thuringiensis israelensis. It’s a bacteria that attacks mosquito larvae.

SD: Can homeowners use it?

AG: The homeowner formulation would be mosquito dunks, which look like donuts. I don’t encourage people to use them, but if they know what mosquito larvae look like and they know larvae are breeding on their property, they can put these out in horse troughs or wetlands. If it’s a birdbath, it’s probably more practical to just dump it out.

SD: How far do mosquitoes travel?

AG: We have 45 different species, and they all behave differently. I know that one species, Aedes vexans, is a nuisance mosquito that can hatch in enormous numbers and really likes flooded wetlands. Where they hatch in Leicester, they can be blown eastward toward Lake Dunmore. It can take several weeks, but I’ve seen huge numbers of them move a couple of miles.

SD: What can homeowners do to control mosquitoes?

AG: The one thing I recommend is personal protection. The state can do all sorts of things, especially when we see a risk and want to knock down the adult [mosquito] population known to be carrying EEE. A lot of people don’t like DEET, but it’s been proven effective for over 50 years. Some of the essential oils will actually repel mosquitoes a bit, but you have to get the levels so concentrated that it can produce skin irritation. So long-sleeve shirts, pants and hats, and a low-percentage DEET. If people don’t like DEET, there’s another repellent called picaridin, a synthetic oil of eucalyptus.

SD: Do you recommend backyard foggers?

AG: You’ll see those in other areas of the country. That’s probably not recommended here. It puts out a lot of pesticide and is not part of an integrated pest-management program. If you’re going to have a party and want to keep the mosquito numbers down, I would recommend having a reputable exterminator put down a barrier spray.

AG: It depends upon what you mean by “work.” They burn propane, generate CO2 and definitely work in picking up mosquitoes. Having said that, I would never use them for mosquito control.

AG: I use something similar, but instead of having a big propane tank, I use dry ice. But my traps have never made a dent in the mosquito population. The only thing I know is that certain days I go back and there are a lot of mosquitoes in my net, and other days there are very few mosquitoes in my net. When people run [propane traps] and see few mosquitoes, they think they’ve done a good job with mosquito control. I know they’re just not finding mosquitoes.

SD: How many mosquitoes turn up in your traps?

SD: Did that make a dent in the population?

AG: No. It just meant there was a serious problem out there.

SD: Has the death of bats from white-nose syndrome affected Vermont’s mosquito population?

AG: The whole bat tragedy is absolutely terrible. The number of bats we had even before white-nose syndrome was only a fraction of what we had in the 1950s. Having said that, mosquitoes are a possible prey item for bats, but given a choice between a fat moth and a mosquito, the bat is always going to go for the moth. And there are many, many other species of flying insects out there that bats will go for, including midges, caddis flies, mayflies and beetles. Bats will specialize on whatever is easiest. The statistic that bats eat up to 500 mosquitoes per hour? I never found any source for where that came from.

AG: I wouldn’t say that. Last summer there were practically no nuisance mosquitoes. In fact, it was probably the fewest mosquitoes I’ve ever trapped. However, for the disease-carrying mosquitoes, I found more of a particular species, the primary one that carries EEE, in enormous numbers compared with what I’ve seen in years past.

SD: What can people do to reduce mosquitoes near their homes?

AG: Clean out your gutters, dump your bird baths, check your wading pools and keep changing the water. In July, a mosquito can go from an egg to an adult in five days. If you have a horse trough, make sure you dump it every two or three days. Or put a mosquito dunk, with Bti, in there if you see it’s breeding mosquitoes. It won’t affect the animals.

AG: In dry seasons, [certain species] can be worse because sometimes people will put a bucket under their gutters because they want to water their plants. And then you get that storm event and the mosquitoes start breeding right away. I can usually find a container in somebody’s yard that’s breeding mosquitoes. Those tires behind the shed? Get the water out of them and put them inside.

The original print version of this article was headlined "Buzz Killer."