State Auditor's Reelection Campaign May Include a Real War 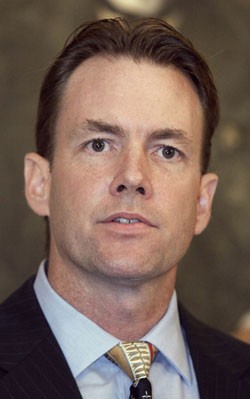 Vermont State Auditor Tom Salmon, who is up for re-election this year, is likely to be deployed to Iraq with the U.S. Navy, possibly by the end of the month.

Salmon, a reservist in the Seabees, the Navy’s construction force, can’t say for sure how long he would be gone, although Seabee deployments typically last no more than six months. “Deployments are sensitive,” Salmon noted, “but they’re also unreliable.”

Indeed, Salmon was scheduled to go to the Middle East with 325 others in 2005. But just weeks before his expected departure, he was one of about 200 service members dropped from the deployment list.

Salmon, a builder second class, couldn’t offer more details about the deployment, partly because he doesn’t know them yet. But the duty would probably involve building schools or training Iraqis in their reconstruction efforts, he said.

If called up, Salmon’s effort to woo voters would be hampered by a new Department of Defense policy that, in effect, prohibits political campaigning while on active duty. For example, under the policy, which was issued in February, Salmon couldn’t use military- or government-issued equipment, such as computers, email accounts, cellphones or pagers, for political activities.

Nor could Salmon direct his reelection campaign from abroad or appear in campaign photos wearing his uniform or while serving in a combat zone. In fact, according to one Navy spokesperson, it’s against the new rules to even inform voters that he’s been called into action.

“He can’t say, ‘Here I am in Iraq defeating terrorists, and I’ll also defeat the budget crisis in Vermont,’ and use the two together,” said Lt. Adam Bashaw, a public affairs officer with the Navy Reserve Forces Command in New Orleans. “When you’re in uniform, you’re supposed to be apolitical.”

Although reservists and National Guard members aren’t banned from seeking elected office, the new directive requires them to get prior approval from the secretary of their service branch if the deployment is expected to last more than 270 days.

“One of the reasons for revising the regulation was to address the number of reservists who are in state elected positions because that [policy] was left rather vague, unclear, or not addressed at all in earlier versions,” Lt. Col. Les’ Melnyk in the Pentagon’s press operations office explained.

While the new policy acknowledges the growing number of military personnel getting involved in electoral politics, it’s too soon to say whether the tighter restrictions will help or hurt candidates serving in the military.

On the one hand, candidates who are deployed in Iraq or Afghanistan can’t give speeches, meet with voters, strategize with party officials, attend fundraisers or engage in any other normal campaign activity. On the other hand, opponents may be reluctant to aggressively attack the records of deployed service members for fear of being labeled unpatriotic. Likewise, voters may be loath to vote elected officials out of office while they’re serving their country overseas. (The federal mandate requiring employers to hold jobs open for deployed service members doesn’t apply to elected positions.)

Eric Davis, a political science professor at Middlebury College and a frequent commentator on Vermont elections, said he thinks the important issue isn’t whether Salmon can campaign, but whether he can serve if reelected.

“I think the question is, for a two-year term, does the length of the deployment affect his ability to carry out the duties of the position?” Davis said. “He needs to be commended for carrying on his service. But if he’s out for six months, is there a deputy auditor who can serve in his stead?”

Salmon is confident his staff is up to the task. “We’re really strongly organized and have able lieutenants on board,” he said. “The place will run at a high hum.”

Salmon wouldn’t be Vermont’s first elected official called to duty during a term in office. Lt. Gov. Brian Dubie, a colonel in the Air Force Reserve, has been deployed several times, including on a Katrina relief mission in 2005 and a classified air-support mission to the Middle East in October 2006. At the time, Dubie said, he “took some hits” in Vermont for going overseas during the election season.

Similarly, Williston Town Clerk and Treasurer Deb Beckett, who’s in the Vermont Army National Guard, was on a 12-month tour in Iraq when her three-year term expired in March 2005. Beckett was reelected in an uncontested race and didn’t have to campaign.

Salmon, a Democrat, was first elected auditor in 2006 over Republican incumbent Randy Brock in one of the closest statewide races in Vermont history. It was the first time ever that a recount overturned the unofficial election-night results.

Thus far, a challenger has yet to declare. Clearly, Salmon hopes it’ll stay that way.

“I haven’t been too focused on politics,” he admitted. “It’s a job that is dedicated to being a catalyst for good government, so we’re really staying on that mission.”