The Great Race Rolls Into Burlington With Vintage Cars 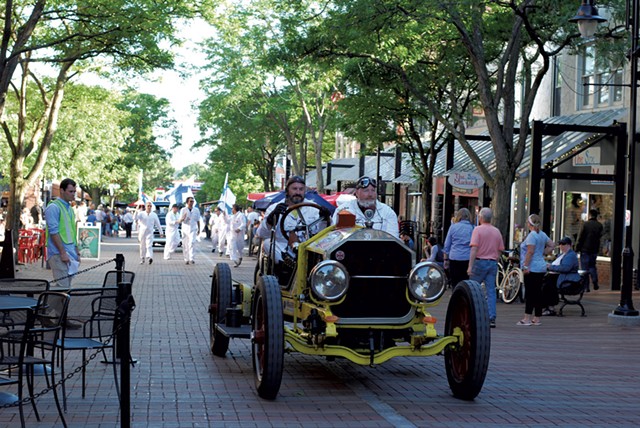 The 2018 Great Race, an annual competitive road rally for model years 1972 and older, made an overnight stop in the Queen City amid a nine-day journey from Buffalo, N.Y., to Halifax, Nova Scotia. Gov. Phil Scott, who has decades under his belt racing cars at Thunder Road Speedbowl, shook hands with drivers alongside Mayor Miro Weinberger. Both men spoke at the evening's opening ceremony.

"A lot of people don't associate cars with Vermont, but we actually have a rich history here in Vermont," said Scott. "The first race was in 1903 at the Caledonia Fair, and we have been going strong ever since."

Cars started arriving at about 5:30 p.m. and were parked on Church Street until 8. Drivers scattered for dinner and drinks, leaving the cars for passersby to gawk at and photograph.

The three Vermont teams racing this year were among the first of the evening's arrivals.

Brent Herrmann and William Burns of Dorset drove a green 1946 GMC pickup truck that originally belonged to Herrmann's father. Burns, the team's navigator, brought a wooden box with the ashes of his father, who passed away in December, so he could race with them in spirit. Herrmann and Burns grew up racing "anything motorized" with their auto-enthusiast fathers.

Steve Boutin, a racer from Essex Junction, said he was happy to spend the night in his own bed.

Despite the gasoline fumes and the revving of engines, spectators seemed pretty excited. Enosburg Falls' Amanda Collins hadn't heard about the race until it arrived but thought seeing the cars was "neat." Jeanne Armstrong, a tourist from Indiana, said she was pleasantly surprised by the vintage invasion.

The drivers were expected on New Hampshire's Mount Washington for lunch on Tuesday.