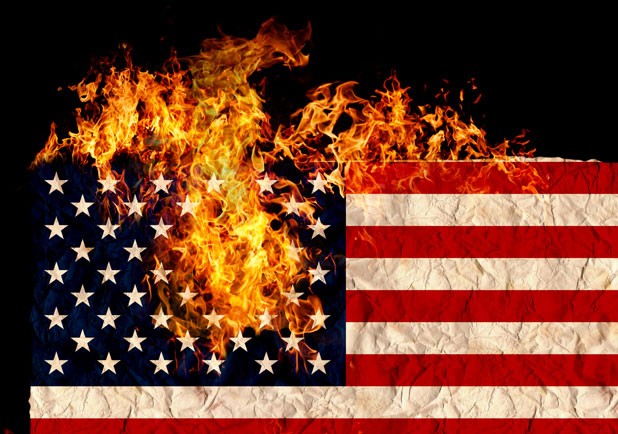 Now that the Fourth of July paraders have packed up their floats, the fireworks have burst in air and come back to earth, and the strains of “The Star Spangled Banner” have quieted, I thought I’d say something about the flag.

The American flag is a piece of shit.

Hold your red, white and blue spitballs. I don’t really mean it. I’m not in love with the American flag, mind you — or any other flag, for that matter — but I don’t despise it, either.

Rather, I have likened Old Glory to the product of a bowel movement as an act of civil disobedience.

In case you didn’t know, Vermont has a flag-desecration law.

Title 13: Chapter 45 of Vermont statute, Flags and Ensigns, makes it a crime to “publicly mutilate, deface, defile, defy [or] trample upon” the American flag or the Vermont state flag. It is illegal to “place or cause to be placed any word, figure, mark, picture, design, drawing or advertisement of any nature upon” the flag. Also prohibited are the display of a flag so altered or the manufacture, sale, gift or possession of any “article of merchandise” bearing its likeness.

In fact, the law imposes a penalty of a year’s imprisonment or a $1000 fine or both if you so much as “cast contempt” upon the flag “by word or act.”

As I have just done.

There is one problem with this statute: It is unconstitutional.

The 1989 Supreme Court ruling in Texas v. Johnson invalidated all such state laws — 48 at the time — as violations of the First Amendment’s protection of free speech. Vermont was one of the 48: Its statute went on the books in 1941. A similar federal statute, an amended version of the 1968 Flag Protection Act, was ruled unconstitutional the following year.

Vermont’s law against doing nasty things to the flag is a dead letter, says Vermont Law School professor Peter Teachout, and probably remains on the books because no one has gotten around to repealing it. He avers that this might have something to do with politics. Noting Vermont’s “strong commitment” to protecting its citizens’ freedom of speech, however, Teachout sees “no danger” that any official will try to enforce the flag law. Repeal, he says, “would be a wise housekeeping measure, but not necessary.”

Vermont ACLU executive director Allen Gilbert told me the same: “There are a lot of statutes that are meaningless because they’ve been trumped by federal law.” Like Teachout, Gilbert says that nobody has the inclination to go through centuries’ worth of text and rake out the legal detritus.

Still, it’s worth taking a look at Vermont’s recent history with the Stars and Stripes, which doesn’t exactly exemplify the “strong commitment” to the First Amendment that Teachout praises.

Back in 1989, when the Court curtailed its options but not its zeal, Congress set about changing the Constitution to safeguard the flag. What came to be called the “flag-burning” amendment was introduced every session; in 1995 the bill passed the House of Representatives. It was defeated narrowly in the Senate. The same thing happened every biennium for the next decade, the Vermont delegation standing with the opposition every time.

Since the states never got a chance to ratify the amendment, 45 legislatures sent billets doux, in the form of supportive resolutions, to Congress. In 1995, Vermont considered such a resolution, too, but it failed. An affirmation of First Amendment freedoms passed in its place.

But that “nay” from the Vermont legislature squeaked through over a roaring debate. And by January 2002, though the rhetoric was more subdued, the ayes had it. Protest votes against civil unions and education finance reform had turned the House over to the GOP and pushed virtually every moderate Republican out of office. Then September 11 happened.

A joint resolution flew from the Golden Dome to the Capitol, expressing the General Assembly’s “condemnation of all acts of flag desecration and similar displays of disrespect for the United States” and urging Congress “to explore all avenues available,” including a Constitutional amendment, to ensure that Old Glory got her props.

Were the lawmakers really worried about the safety of the flag? Were the masses using it as a snot rag or kindling, or writing obscene rap songs about it?

Of course not. The federal Flag Protection Act was an attempt to rein in protests against the Vietnam War. In 1989, right-wingers led by North Carolina Senator Jesse Helms saw the political potential in denouncing an art installation by a young, black, self-proclaimed revolutionary artist with the adopted name of Dred Scott that challenged viewers to tread on the flag.

So it was in Vermont. In 2001, in addition to a school-prayer proposal, Republicans produced bills requiring public school children to recite the Pledge of Allegiance daily. Those bills died in committee, but a resolution recommending that House members do the same went through. It was watered down, but it went through. As for prayer, the legislature already heard the words of a clergyperson every morning.

The Pledge of Allegiance sponsors called for a roll-call vote. With an angry “nay,” East Montpelier progressive Democrat Andy Christiansen called it a McCarthyesque loyalty oath. “Let the patriotism Olympics begin!” he declared.

What Christiansen understood — as did Helms and the drafters of the 1968 statute — is that it doesn’t matter if a law accomplishes anything practical; its constitutionality also is irrelevant. What counts is the symbolism. Bills or laws requiring allegiance to, or renunciation of, symbols are themselves symbolic. Symbols — Scott’s piece no less than the high-waving flag itself — evoke emotions, and that is where their political power lies.

That no official could enforce Vermont’s flag law doesn’t mean that no politically opportunistic official would invoke it. Once it is exhumed, the demagoguery can begin, and those liberal Constitution huggers are on the defensive.

Evil things need stakes through their hearts lest they rise, undead, to bite us. Would somebody please repeal Title 13: Chapter 45?