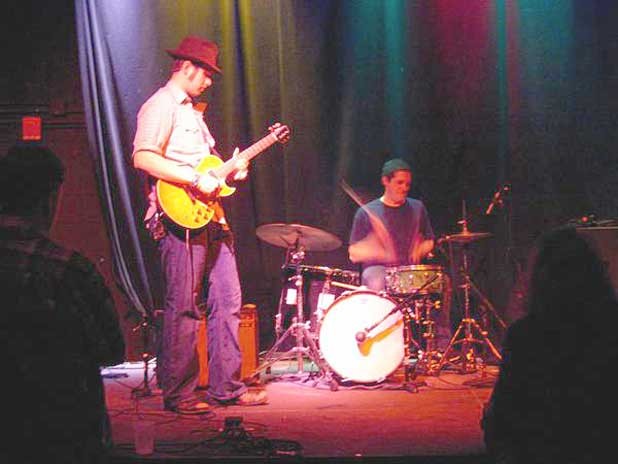 Every now and then, the planets align just so and provide the perfect cosmic convergence of events for pure, unbridled rockin'. Such is the case this Friday as Vermont's premier rockabilly ensemble the Starline Rhythm Boys releases its fourth album at Vermont's premier roadhouse, Charlie O's.

Called Live at Charlie O's World Famous, the record is, well, just what the title would suggest: a live recording of an SRB show last fall at the greatest bar in Vermont. The 75-minute opus was engineered by the incomparable Chuck Eller and features guest appearances from pedal steel player Kevin Maul and SRB producer Sean Mencher.

But the real stars are, of course, Danny Coane, "Big Al" Lemery and Billy Bratcher, who serve up 23 blistering hits for a capacity crowd. The disc is "seamless," meaning there is no down time or decay between tracks. Armed with a PBR tallboy and a shot of whiskey, it's next best thing to being there in person.

The Burlington music scene has been struggling to fill the void left by dearly departed truck-stop rockers Chuch, who quietly called it quits earlier this year. Though the denim-clad "speedwestern" progenitors are sorely missed, two bands have emerged from the breakup to fill our collective need for gritty rockin'. It's sort of like how Uncle Tupelo split into Son Volt and Wilco, only profoundly more badass - and amicable.

Ex-Chuch pedal steel guitarist Matt Hayes made his debut with his new outfit The Marsten Lot - the name is taken from Stephen King's classic vampire thriller Salem's Lot - earlier this summer as part of Magic Hat's Church Street Bizarre during jazz fest. The reviews were favorable, by and large, especially from Chuch fans.

The second group, Jesús Vanacho, is something of a local all-star band, led by brotherly Chuch rhythm section Justin and Noah Crowther on drums and bass, respectively. Rounding out the lineup are keyboardist Adam King of Turkey Bouillon Mafia and Dead Sessions renown, and Lighting Ridge axeman Ethan Ryea. Ex-Chuch shredder Chitter Hammaker (not pictured) is pulling double duty, as he's now playing with both JV and The Marsten Lot. Not surprisingly, the group is reported to be dusting off some old Chuch tunes.

Jesús Vanacho actually debuted earlier this summer as well. But since their inaugural Nectar's show they've laid pretty low. That all changes this Friday as the band headlines a show at Club Metronome with guitar god Bill Mullins' revived project Blowtorch and Burlington punk legends The Wards.

Where does the time go? I've once again blown a hefty chunk of my column space, so it's time for another rousing, rapid-fire Soundbites.

Burlington ex-pat Nick Cassarino is making a welcome return home this week. The ace guitarist has been plying his trade in NYC for the last year or so, but has two local shows lined up this weekend, Saturday at Parima's Acoustic Lounge and again Sunday at a Barack Obama fundraiser at The Old Lantern in Charlotte.

I'm sorry to report that local classic-rock outfit Fractured has called it quits. The band had been a bar-band staple for years, but couldn't overcome continuing lineup changes. The group's two remaining members, Scott Belisle and Scott Guptill, plan to continue playing, either with a new band or by joining an existing group. Good luck, guys.

Speaking of bar bands, there's a potentially killer show this Saturday at the Backstage Pub in Essex as The Boomflowers - composed of former members of late, great Burlington rockers Chin Ho! - make their debut this Saturday. According to an email I received from guitarist Matt Vachon, the band is a "drunken country" cover band. Awesome. Once they get settled in, though, the plan is to write and record original tunes to throw in the mix.

Since there's a weekend coming up, it follows that there must be another outdoor music festival, right? Right. This time around it's the Liberate Music & Healing Arts Festival this Saturday at the Bundy Center in Waitsfield, with Rubblebucket Orchestra, Twiddle and whole bunch of good vibes. For more info, see the calendar spotlight on page 23B.

Fans of heady psych-jazz will want to be at Red Square this Monday, as two local acts melt minds and faces. First up is Gravel, a heavy fusion quartet featuring former members of Burlington sextet Leon Tubbs. After that, W.E.S.T. takes the stage. The acronym stands for Will's Electric Space Trumpet, which actually describes the band about as well as I could.

This Tuesday is the final installment of the Concert on the Green Series at Shelburne Museum with blues stars Robert Cray and Keb' Mo'. Kudos to Higher Ground for yet another solid season.

This weekend's Montréal Film festival will have a distinctive Vermont flavor as Home, starring Marcia Gay Harden, premieres Saturday at Quarter Latin Cinemas. Burlington songwriter Gregory Douglass provided all of the piano and vocal work for the film.

Lastly, Rick Springfield fans - both of them - will want to be at The Monkey House this Friday as Vermont's self-proclaimed "premier '80s cover band" Hot Neon Magic devotes an entire night to celebrating the "Jesse's Girl" writer's birthday.

Last Saturday night/Sunday morning, Bryan Kapschull, 30, drowned after his canoe capsized off Grand Isle. He was the drummer for local blues-rock duo The Leaners. While I'd seen him perform a few times - though back then it was under the band's cheeky moniker Pete & the Meatwhistle, which I may or may not have poked fun at in a recent column . . . sorry, Bry Guy - I actually came to know Bryan working together as part of the Bru-Tang Clan at the Magic Hat Brewing Co.

When we eulogize loved ones, it seems the tendency is to focus on pretty generic parts of their persona. "He/she had the nicest smile," "He/she was such a kindhearted person" and so on. In all honesty, you could take any of those ubiquitous sentiments and easily apply them to Bryan. Dude was a bright, fun and wonderfully goofy guy.

But my fondest memories of Bryan are working together on Saturday mornings, when we were usually the only people in the brewery. And by "working," I mean sitting on top of the brew tower drinking coffee, listening to Arcade Fire and making fun of the endless stream of fanny-pack-clad tourists filing into the retail store from the big window overlooking the parking lot.

Behind his easy smile - see what I mean about eulogies? - was a savagely clever wit, capable of delivering hysterical, lightning-quick jabs, seemingly from out of thin air. Given my fondness for poking fun, you can imagine how well we got along.

I haven't worked at Magic Hat for well over a year now. But to me the Bru-Tang is still like family. So it follows that losing Bryan is like losing a brother. We're gonna miss you, man. I already do.