St. Michael’s College sophomore Kit Rivers admits that when it comes to modern entertainment, it might be hard for the old-school theater to compete with the instant gratification of YouTube or the production values of a 3D multiplex.

“Theater can no longer claim to live in a world without screens,” says Rivers, assistant director of the upcoming production of APPetite.

Embracing and understanding that brave new world is at the heart of the original play, which goes curtains up — and screens on — on Wednesday, April 11. The play tackles our obsession with technology — everything from online dating to the threat of alienation in the technological age.

“[The show] brings to our awareness something that has become so casual,” says Rivers. Social media, Facebook — these are second nature for Rivers and her classmates, she notes. A cellphone is almost an extension of one’s arm, she adds. “This show brings to light, and brings to our attention, how engulfed we can become.”

Under the tutelage of director and theater professor Cathy Hurst, an ensemble cast of 17 actors built APPetite from the ground up. It’s what’s known in theater circles as a devised work, meaning the company brainstormed, improvised and eventually scripted the play in a collaborative effort.

The show is also interactive: Audience members will be seated on stage, and, instead of being warned to turn off cellphones at the beginning of the performance, they’ll be encouraged to turn them on. Periodically, the audience will be invited to text in questions or comments for the characters that will be wrapped into each performance.

Part comedy, part drama, APPetite doesn’t offer as many answers about living with technology as it does questions.

“There’s just this fact that we’re all tied to our technology and the endless information stimulation that we get from it,” says Hurst.

The play follows on the heels of the college’s “Disconnect to Reconnect” event last week, during which St. Mike’s invited students, faculty and staff to participate in a 72-hour technology fast. That meant no computers, no video games and no cellphones.

“I’m aware that I’m probably addicted,” she says with a laugh. While she would like to unplug, Rivers admits she doesn’t intend to do so anytime soon: Networking online is crucial to her work both as a student and as a standup comedian.

“There’s a part of me that understands it’s the world we live in,” Rivers says. “We’re at a point in society and the technological revolution where we can’t keep putting up a wall and pushing it away.”

But that doesn’t mean trading old-fashioned theater for flashy Hollywood blockbusters — not yet, at least. Rivers thinks an interactive play such as APPetite can provide a kind of entertainment that no movie can match: audience participation.

“No matter how many big Transformers there are, you’re not going to experience that,” she says. 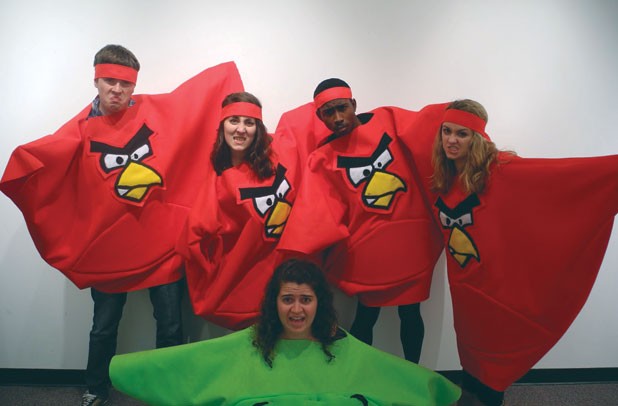