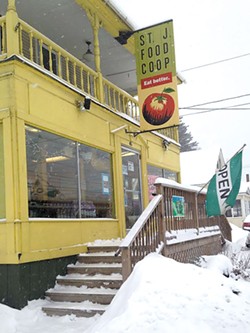 Earlier this month, the St. J. Food Co-op closed its doors for the last time. The 17-year-old co-op had been struggling for a while, according to Chris Wenger, treasurer of the board of directors.

Wenger, who joined the board almost two years ago, says at that point "it was already a bad situation. We tried to keep it going. We tried to be creative," he adds. "No matter what we did, it wasn't enough in the long run to get people in the numbers we needed to be sustainable." The final straw came when the co-op couldn't pay its rent, says Wenger.

The co-op announced its closure in an email to members detailing the company's last-ditch efforts, which included cutting hours and reducing the number of employees working a given shift. According to the newsletter, sales were down 39.5 percent between December 1, 2015, and February 20, 2016. "We feel that we have exhausted all possibilities," it read.

Wenger says he has heard others talk about opening another natural foods store in the area. "There's a lot of interest in the community for a natural, co-op-style market," he says. "I believe it's possible. Maybe with a better location, very experienced management and the right amount of investment."