St. Johnsbury Athenaeum Celebrates the Return of Its Bierstadt 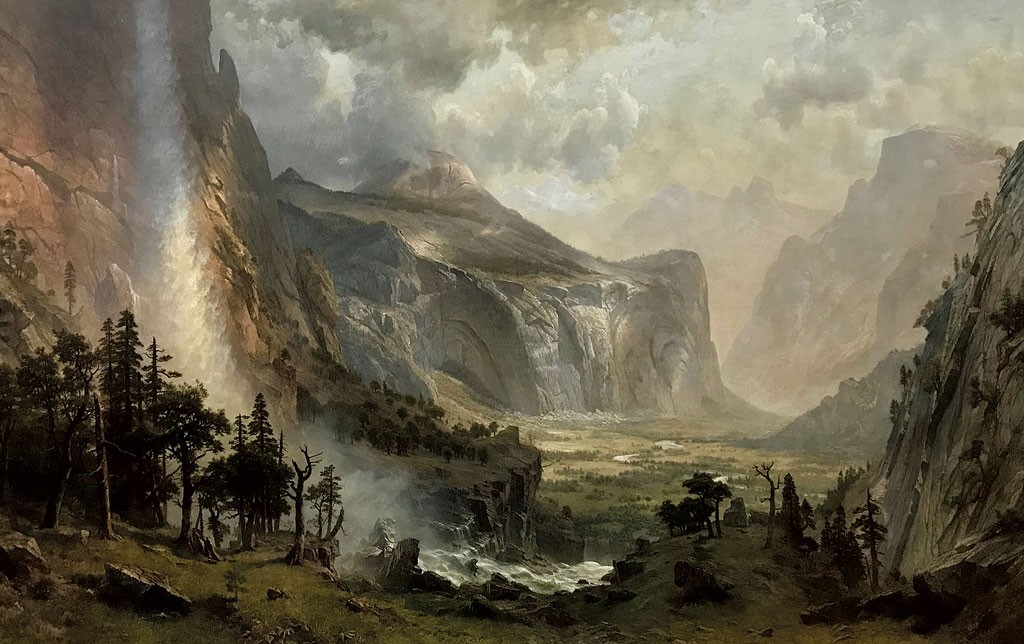 In recent years, visitors who came to the St. Johnsbury Athenaeum to see "The Domes of the Yosemite" by Albert Bierstadt (1830-1902) might have noticed that the painting seemed to sag. In fact, according to athenaeum director Bob Joly, the immense artwork was in trouble.

"For several years, the painting has looked a little saggy in the summer, and then it would tighten up over the winter," Joly said. "But three years ago, it didn't tighten up."

That was a warning sign. Joly called in professional conservators to examine the nearly 150-year-old canvas and found that not only had it weakened, it had torn near the top of its huge frame. The canvas had drooped so much that Bierstadt's signature — characteristically painted in bold red — was no longer visible.

"We were told, 'You're going to come in some Monday morning and find it on the floor,'" Joly said.

In addition, a 1950s-era coat of varnish had turned gray, dulling the colors.

The 10-by-15-foot painting — Bierstadt's largest — has been the centerpiece of the athenaeum's art collection since Horace Fairbanks, a wealthy St. Johnsbury industrialist and Vermont's 36th governor, donated it in 1873. "Domes" is widely regarded as a masterpiece of 19th-century American art.

In 2016, keenly aware of the painting's value to both the athenaeum and the state, museum officials launched a multipronged campaign to restore it. First, they hired Richard Kerschner, a professional conservator for many years with Shelburne Museum, to help write the formal request for bids on the project. Kerschner reviewed the bidders, along with Joly and Elinor Levy, then athenaeum board chair. Independently, all three selected Artcare Conservation of Miami to do the work.

Meantime, Joly and the athenaeum board launched a fundraising campaign, eventually receiving some $300,000 in donations from 150 people and institutions. The actual restoration cost about $84,000; the remainder covered the addition of a climate-control system to the gallery, as well as various professional fees.

Joly had hoped the restoration could be done without removing the Bierstadt from the athenaeum, but when the conservationists came to see its condition, they determined it would have to go to their studio. Last October, for the first time in 145 years, the masterwork was tenderly removed from its frame.

"That was the scariest moment for me," Joly said. "I had a stomachache for three days."

The painting was carefully faced with a special Japanese paper, rolled onto a cannon-size cardboard tube, and driven in a rental van to Miami, where Artcare Conservation would return it to its former grandeur.

Finally, after being displayed at the Charles Hosmer Morse Museum of American Art in Winter Park, Fla., "Domes" was once again rolled up, driven back to St. Johnsbury, replaced in its custom-built frame and remounted at the athenaeum early last month. There, it again dominates the entire west wall of the gallery. The painting was unveiled and opened to the public last month. A celebration is scheduled for Friday, August 10.

"It was the largest thing in color most people had ever seen." Bob Joly tweet this

As expected, the canvas is hugely improved. Its colors are brighter and more nuanced. Its perspective — the illusion of depth — is clearer. And elements not seen for years, such as a tiny bird on a scraggly pine branch, have reappeared.

Though "Domes" had been in place since 1873, this wasn't the first time it had traveled. Shortly after Bierstadt completed it in 1867, the work went on tour to New York City, Philadelphia and Boston. At the time, the American West was still largely frontier, and Bierstadt became famous for his large-scale paintings of the stunning, mountainous terrain. People flocked to see the paintings to find out just what the Wild West looked like.

"It was the largest thing in color most people had ever seen," Joly explained. "Bierstadt was saying, 'You're not going to believe what's out there — this is our country.'"

Eventually, a wealthy man named LeGrand Lockwood from Norwalk, Conn., purchased "Domes" for $25,000 — a fortune in the mid-19th century. But Lockwood died bankrupt in 1872.

Enter Fairbanks, who purchased the Bierstadt at auction for the bargain price of $5,100. He brought it to St. Johnsbury and installed it at the athenaeum.

Not everyone was charmed with the idea. The San Francisco Call, a California newspaper not far from Yosemite Valley, grumbled, "Now 'The Domes of the Yosemite' [is] doomed to the seclusion of a Vermont town where it will astonish the natives."

Purchasing the painting was part of Fairbanks' plan to make St. Johnsbury a center for the study and celebration of art and culture. So was building the athenaeum itself. The building, which serves as the town's library as well as housing an impressive art collection, was named a National Historic Landmark in 1996.

"The Fairbanks legacy means a lot to this town," Joly said. "People are very proud of what's here."

The director is relieved to have the magnificent landscape back home, looking much as it did when Bierstadt signed it just after the Civil War. "It's ready," Joly concluded, "for its next 150 years."

Celebration for the return of "The Domes of the Yosemite," Friday, August 10, 7 p.m., at the St. Johnsbury Athenaeum. Free. THIS EVENT WAS CANCELED.

The original print version of this article was headlined "St. Johnsbury Athenaeum Celebrates the Return of Its Grand Bierstadt"