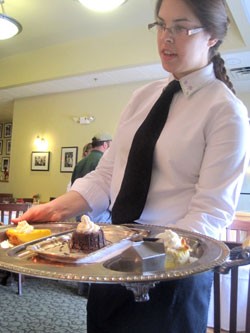 When was the last time you had beef tenderloin at a restaurant for less than $10? Or butter-braised lobster for $11.95? Probably never, or too far back to remember, unless you’re in the lucky minority that’s discovered St. Johnsbury’s Hilltopper Restaurant.

How do they do it? Child labor — but in a good way. The Hilltopper is the working classroom for St. Johnsbury Academy’s culinary program. First-year vocational students at the residential high school learn the basics in the on-campus bakery run by pastry chef Paula Bystrzycki. They work in the catering kitchen, preparing meals for special events; and do prep work for the Hilltopper, which is run by chef David Hale and manager Sue Libbey.

In their second year, students spend two course blocks each day at the Hilltopper at 1216 Main Street, on top of rigorous academics. Mondays and Fridays are reserved for classwork, which covers new techniques and management and purchasing skills. But Tuesday through Thursday, from 11:15 a.m. until 1 p.m., the high schoolers become cooks and servers at one of Vermont’s hidden gems.

Like St. Johnsbury Academy as a whole, the culinary program offers a prestigious education. Since its beginning in 1970, the program has produced cooks for Northeast Kingdom restaurants such as the Rabbit Hill Inn and Tamarack Grill. Last year, 12 grads earned a collective $120,000 in scholarships to culinary schools. Ryan O’Malley, previously chef at the now-closed Elements in St. Johnsbury and currently a chef instructor at the New England Culinary Institute, got his start at the Academy before heading to Paul Smith’s College.

In O’Malley’s day, St. J.’s was more like other high school culinary programs. Students cooked within school walls for a customer base of peers and teachers. That changed 10 years ago, when the students began preparing their fare in the space on Hastings Street that once held the Black Bear Tavern & Grille. Three years later, after more than a year of work from carpentry and electricity students, the clean, modern Hilltopper Restaurant opened in its current location.

At that time, in 2006, Jim Libbey ran the culinary part of the program, while Sue Libbey, his wife, taught students restaurant-management skills. When an injury benched Jim, the school posted an ad for his replacement. It landed on the desk of David Hale, the NECI chef-instructor who had opened the fine-dining Chef’s Table in 1995, then worked as NECI’s executive chef and director of creative services. When asked to send the ad to alumni on his listserv, Hale decided to apply for the job himself.

Today, while Sue Libbey remains the friendly, professional face of the Hilltopper to the public, Hale has made the restaurant a destination for diners in the know.

During the school year, the students prepare and serve four different seasonal menus. Diner fare and an American bistro menu start the year; next, the teens pull out all the stops with a Mediterranean menu.

That eclectic bill of fare made its debut during Hale’s first school year on the job, four years ago. Before his arrival, students had traditionally agreed on a theme for their second-to-last menu of the year. When the class couldn’t decide between Greek and Moroccan, Hale pulled out a map and gave them a culinary geography lesson on the Mediterranean and its varied cuisines.

Today, the menu includes three or four dishes each from Barcelona, Athens, Sicily, Alexandria and Morocco — for instance, braised rabbit stew with Serrano ham, lamb moussaka and Moroccan harira soup. Diners are unlikely to find such dishes assembled on a single menu anywhere else in Vermont, let alone in the Northeast Kingdom, at prices starting at less than $2 for some soups.

Not surprisingly, the Mediterranean offerings are popular. “With that menu, our guests know what they’re getting,” Hale says. “They chew Sue out when they hear we’re changing it. We ran that one a couple of extra weeks this year. Everyone appreciated it, and it worked for us to be able to plan [the current] menu.”

He’s referring to the final menu of the year, when seniors take a bow by preparing their signature dishes. This year, each of the 10 graduating students conceived a dish that represents who he or she is as a blossoming chef. The menu launched last week and will be served at Hilltopper until the school year ends on May 15.

The diversity of both the students’ origins and their goals informs the menu. Sajni Richardson comes to St. Johnsbury Academy all the way from Bermuda, one of the 27 countries represented in the student body. Next fall, she’ll begin her first semester at Johnson & Wales University’s Miami campus, majoring in culinary arts and exploring a passion for pastry on the side.

Richardson’s dish is a duo of fish that celebrates the holiday season, Bermuda style. “This week is Good Friday; Easter is on Sunday. Usually around this time of year, we have hot cross buns and fish cakes,” she says. “It’s the perfect timing to introduce it to this area.”

Her petite, flaky salt-cod cake is combined with blobs of mashed potato, all breaded in panko and served on a tiny bun. To contrast with the fried celebratory food, Richardson grills a chunk of sushi-grade tuna and serves both with a side of tartar sauce speckled with capers. A salad of grilled corn with beets is a fusion of Richardson’s beachy birthplace and her adopted home. Even in Bermuda, where fish is plentiful, you’d be hard-pressed to find the dish for the Hilltopper’s $8.95 price tag.

Other dishes have a more local focus. Maria Warden uses her family farm’s chicken in her pot pie. Most other students meet the Hilltopper’s Vermont Fresh Network criteria with food delivered by Black River Produce or Reinhart FoodService.

Hale says he loves hitting local farm stands and supporting small farms in the Northeast Kingdom, even those that are not VFN members. No matter what the supplier, he says, the school always pays full price for products.

Cody Largy’s $8.50 locavore dish is one of the most ambitious on the menu, using an ingredient that recently became a rare commodity — quail from Cavendish Game Birds of Vermont. A fire last month at the Springfield farm devastated one of its three barns, killing 20,000 quail. But Hale says the farm still has enough to supply the Hilltopper, which feeds between 30 and 65 people each day, three days a week.

Largy says he relished the challenge of preparing quail, a notoriously unforgiving fowl. His dish, cooked by another student on the day Seven Days tried it, was quail as it should be, cooked just beyond pinkness but still ideally moist. It was served over a Parmesan-heavy risotto made of sweet potatoes instead of Arborio rice, and both meat and starch benefited from a tangy red-wine demi-glâce with a subtle drizzle of white truffle oil.

Approximately 65 percent of St. Johnsbury culinary students will pursue a kitchen career, and about half of those will skip higher education in favor of jumping into a full-time restaurant job. Largy belongs to the latter group; he says he chose to head south, to a restaurant in North Carolina, to explore his affection for all things heavy and fried.

Leaving New England is part of Hale’s advice to get out and taste the world. “We’re not training them to be line cooks and just stay in the area,” he says. “We want them to explore. A big reason we change the menu as much as we do is we want them traveling through their palates first.”

The students are giving Vermonters opportunities to travel through their palates, too. One senior, Robert Sylvester III, was inspired to create his dish of barbajuan, fried chorizo and Parmesan dumplings on a recent trip to the French Riviera.

Amanda Geil learned her Swiss-German take on goulash from a friend who hails from the Alps. Made of Boyden Farms flap meat, the stew is served over toasted spaetzle with cucumber-dill salad and apple-and-vinegar-flavored, bacon-packed red cabbage. For good measure, an exceptionally tender, beautifully seasoned filet mignon sits on top of the $9.95 lunch.

Geil, who is currently deciding between attending NECI and the Culinary Institute of America, was working as a server last week when Seven Days visited the Hilltopper, nervously taking orders and answering questions for what Hale says is an overwhelmingly well-informed public. Many guests are regulars and happy to give instructors feedback on their charges’ growth.

“These are high school kids,” Sue Libbey says. “We ask at the beginning of the year, ‘How many of you are just petrified to serve the guests?’ Lots of hands go up. But they bloom over the year.”

“[Customers] are weepy at the end of the year, saying goodbye,” adds Hale.

Of course, customers will miss the students they’ve grown to know, but their grief may also have a more selfish component. They know they’ll have to wait until fall for another taste of the Hilltopper’s exquisitely inexpensive fine dining.

This article was titled "Top of the Hill" in print.