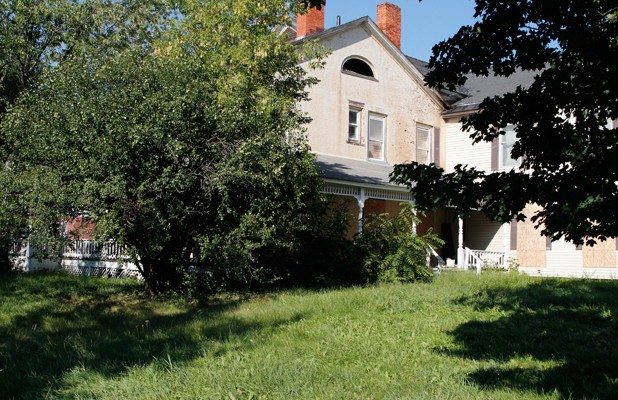 Last week was a big one for the little city of St. Albans. Voters overwhelmingly approved a bond to build a $13 million parking garage. The State of Vermont sold a building so one of the city’s largest employers, Mylan Technologies, can add more jobs downtown. Even the governor paid a recent visit to celebrate the completion of the city’s Downtown Streetscape Project.

But while most residents are focused on St. A’s shiny new lease on life, a few are worried about its past. They’re trying to save one of the oldest properties in town, known as the Owl Club, from demolition. It’s not just a ramshackle structure on the corner of Congress Street and Maiden Lane that happens to be on the National Register of Historic Places. The 193-year-old building was the childhood home of John Smith, a former U.S. congressman who was instrumental in constructing three railroads: Northern Pacific Railroad, Vermont Central Railroad, and Vermont and Canada Railroad. The last two of these passed through St. Albans and contributed to the town’s early prosperity.

In the process of redeveloping itself, will the Rail City destroy some of the history behind its name?

“We’re discovering all the time that even people who have lived in St. Albans all of their lives don’t necessarily know or understand the significance of this particular property,” says Peter Ford, who relocated his archival music business to St. Albans in 2006. To generate awareness and support for the home, Ford and a group of like-minded preservationists have formed an organization called Save Our Smith Homestead.

They’re also taking the case to Environmental Court. Ford and two of his neighbors — Sue and Mark Prent — have appealed the decision made by the development review board earlier this year that allows St. Albans-based Connor Contracting to raze the structure to make room for a new office building.

The Prents live right next to the Smith homestead, which has a spooky feel even on a sunny Friday afternoon. Broken windows and a chain-link fence around the property don’t exactly sell the place that everyone in St. Albans calls the Owl Club — so named for a male choral society that once owned the property.

Over the years, the club added on to Smith’s original brick structure and opened the space for public meetings. In the opinion of Ford and Prent, however, the building’s second act has distracted St. Albans from the more vital narrative of the Smiths, a family that also produced two Vermont governors: J. Gregory Smith and Edward Curtis Smith.

Last fall, Connor Contracting bought the property from a member of the Owl Club. By February, the company’s founding principal, Mike Connor, had drawn up his plans and approached the city. Connor did not respond to several calls for comment on this story.

Ford, who sits on the city’s design advisory board, recalls that its initial recommendation was to tear down the Owl Club’s additions, leaving the relatively small Smith residence in place. But the DAB only provides counsel in city planning matters; final judgment on Connor Contracting’s demolition request was left to the DRB, whose members signed off on it.

A key part of the appeal, Ford and Sue Prent explain, rests on the historic import of the original structure and the environmental impact of an office building in a residential neighborhood.

Another point, they say, will be that Connor Contracting didn’t provide a fair estimate of the cost to rehabilitate the original 1820s structure. The city requires such an assessment to be conducted before any demolition permit can be granted. Although Connor did get one that pronounced the building unsalvageable, it was from a firm called Ruggiano Engineering, which is also on contract to perform the redevelopment — a conflict of interest, according to Prent and Ford.

Megan Manahan, the chair of the St. Albans DRB, says it hasn’t received enough demolition requests to establish a precedent for considering the Connor application, but clarifies that her board always refers to the city’s land-use regulations. In this case, those regulations stipulate only that applications include a cost assessment of rehabilitation — from a “qualified engineer.”

Ford says he and other Smith homestead supporters are now circulating flyers and trying to gather 500 signatures to petition the city council or mayor to help avert its destruction. He points out that the city has been using tax incremental financing — funds advanced on the promise of future tax revenues — to pay for construction projects downtown, and wonders if the same approach might work for the Smith house.

In fact, St. Albans has already done something for the old property. In July, the Preservation Trust of Vermont — a nonprofit organization that helps communities around the state preserve historic structures — offered to provide a matching grant to the city to fund a $1000 appraisal of the Owl Club building by an experienced, objective engineer. At the time, the city council unanimously voted to approve $500 for the assessment.

“We were disappointed that the developers got a demolition permit without really having a good analysis of the original building,” says Paul Bruhn, executive director of the Preservation Trust. “There has been a lot of interest in this particular community, and we thought that the results of this particular assessment would be made available to the city.”

Even though Bruhn had an engineer ready to weigh in on the Smith building in July, he says that Connor Contracting still hasn’t taken him up on the offer.

St. Albans City Manager Dominic Cloud believes Connor eventually will, blaming the delay on the ongoing litigation in environmental court. Cloud compares the city’s role in the dispute to that of a “broker” and clarifies that it would usually only intervene in the case of private property if there were parking issues to resolve or a brownfield to clean up. He adds that the city council’s offer of an assessment was an attempt to advance the conversation about a building that many describe as an eyesore.

Ford and Prent envision it as a de facto office space for start-up businesses like Office Squared in Burlington, a museum for the state’s rail industry or an addition to the St. Albans Free Library, which is right next door.

“The city has agreed to participate in the study because we think the community as a whole would benefit from knowing what it would cost to rehabilitate. Without that number, it’s a theoretical discussion,” Cloud says.

For now, the city manager admits, St. Albans is focused on its forward-looking, downtown revitalization efforts because that area needs adequate parking, roads and sidewalks — what he calls a “compelling sense of place” — to attract businesses, workers and shoppers. The Streetscape Project has provided those amenities from Hudson Street to Stebbins Street. About 75 percent of the people who weighed in on the parking garage voted in its favor, Cloud says, an unprecedented margin of local support for a piece of infrastructure.

Yet St. Albans has a record of supporting historical structures, too. Rep. Mike McCarthy (D-St. Albans) doesn’t take a side on the Smith homestead, but he does point to one historic-preservation success story: the grant and loan the city provided for Green Dolphin LLC to renovate the St. Albans House, an 1840s brick and frame hotel on Lake Street. Now near completion, the two-story, mixed-use building will rent out space to a variety of businesses.

Explaining that retail has been declining in St. Albans since the 1980s, McCarthy says the city’s priority is bike paths, restaurants and other amenities that will keep young, talented workers in town. But the representative acknowledges that in the Smith homestead case it has proven harder to keep an eye on both the future and past.

“There are two competing interests in the community. We’re doing everything we can to revitalize the city, which requires lots of construction, and the other interest is, we want to preserve our historical identity,” says McCarthy, who also co-owns the Cosmic Bakery & Café on Main Street. “The Owl Club is an example of the way those interests are colliding.”