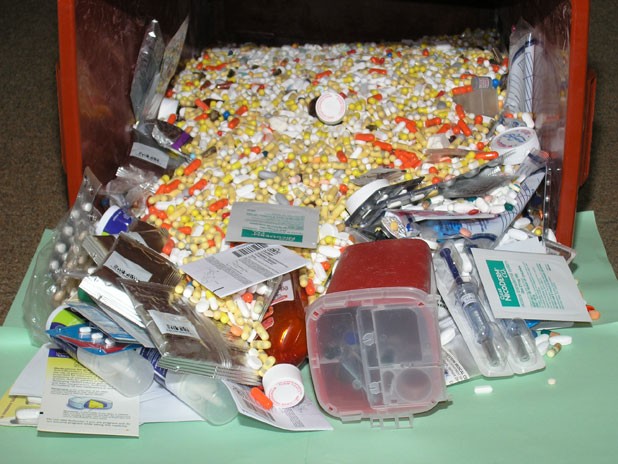 St. Albans City Police Chief Gary Taylor was struggling to pry the lid off the red, waist-high biohazard bin that is locked securely in his department's evidence vault.

"I always have trouble with this," he muttered. "Hang on."

And then - POP! - there they were: thousands and thousands of pills in all shapes, sizes, colors and potencies.

Since late May, the St. Albans City Police Department (SAPD) has collected more than 8500 unwanted and unused prescription pills from residents as part of the city's Prescription Drug Repository Program.

Through a partnership with the Northwestern Medical Center (NMC), also in St. Albans, the SAPD aims to take more prescription drugs out of black-market circulation and reduce the incidence of home burglaries by desperate addicts.

"We assume that because we've legally obtained a federally approved drug, we're safe once it's in our medicine cabinet," Taylor said. "Today, that's just not always the case."

Especially, it seems, in St. Albans. For the past few years, violent, drug-related crime has plagued the city. Two heavily attended community forums and a handful of mitigation efforts resulted in a graffiti clean-up day and an ad-hoc citizens' committee to address public safety.

"For quite a while now," Taylor noted, "with many of our burglaries, what's missing most times is prescription drugs or money."

During the program's pilot period - May 21 to June 21 - the SAPD collected 7000 pills. When the pilot ended, residents kept bringing their unwanted meds to the station, so Taylor decided to implement the program permanently. The department also accepts prescription-related paraphernalia, such as syringes, asthma inhalers and transdermal patches.

Taylor said the initiative hasn't cost the department anything yet, but that he'll eventually have to budget for the cost of disposal. The pills and paraphernalia were to be incinerated through the hospital, at a site in northwest Vermont. But then Taylor discovered that the hospital's waste-disposal contractor, National Waste Management, hauls the waste out of state.

Taylor said the department will not release the pills it has collected until it can "ensure the integrity of appropriate disposal." Jonathan Billings, NMC planning and community services director, said the hospital has agreed to that.

"Their reaction was very positive," he said. "There was a comment made about maybe replicating this statewide."

But a prescription drug take-back program might not be viable for all municipal police departments, said Leonard "Joey" Stell, Swanton police chief.

Stell acknowledged that "there is no community in Vermont that does not have a prescription drug problem. If you can name the pill," he said, "odds are high it's being abused."

Yet, unlike the SAPD, which has an officer on duty 24/7, Stell's office closes at 3 p.m., and he cannot pay officers overtime to collect unused meds from residents. A drug take-back program would be more effective in larger towns and cities, such as Burlington, Rutland and Barre, Stell said.

Nonetheless, the SAPD's project has supporters from beyond the law enforcement ranks. Barbara Cimaglio, state deputy health commissioner for alcohol and drug- abuse programs, said repository programs can help ensure unused medications do not fall into the wrong hands.

"We are especially concerned about children finding substances that may be particularly dangerous," Cimaglio said. "The St. Albans program seems to be a model that could be used by other communities to address the growing problem of prescription drug misuse."