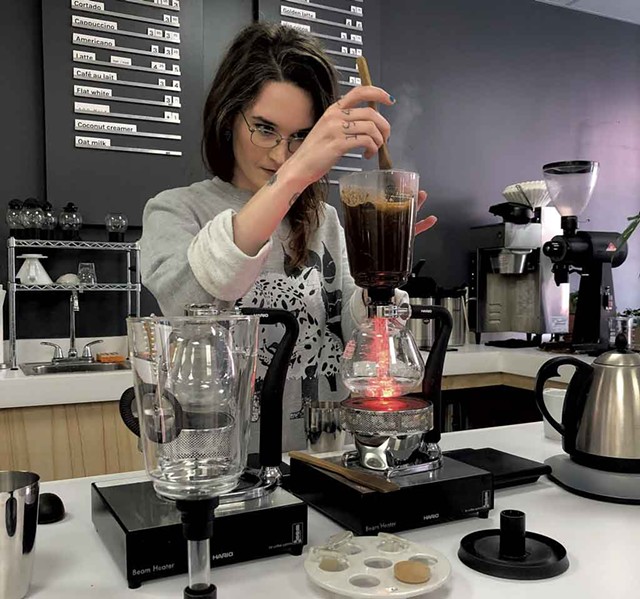 Catalyst Coffee Bar has moved to 10 Lake Street in St. Albans City, 331 feet around the corner from its original location at 22 North Main Street.

The multi-roaster coffee lab, which opened in 2016, is known for siphon brewing and sourcing high-quality coffee from local roasters such as Vivid Coffee Roasters and Brio Coffeeworks.

Owner Karen Scheffler announced the move on Catalyst's website on August 20 and closed to make it happen on August 28. The Lake Street location opened for business at 7 a.m. on September 9.

Also making the move from North Main Street was Red House Sweets, owned by Caroline Demers. The coffee bar and the bakery sit side by side and share seating in the new location.

"I had a connection with this building," said Scheffler, who recalled helping the building's owner find someone to fix its historic leaded windows "a long time ago." The building has been empty for years, she said, but in the newly renovated space, she can still identify the parts of the window that were replaced.

Barista Alice Johnson was happy to be working behind the counter. "We designed the bar based on what we learned from being in the first space for three years," she said. "It's really nice, and now we even have a dishwasher."

Scheffler said community response to the move has been overwhelmingly positive. She's found it easier than expected to draw people off the main drag, especially with a municipal parking garage directly across the street. "I loved the old space, and change is hard," she said. "But this space is really special."