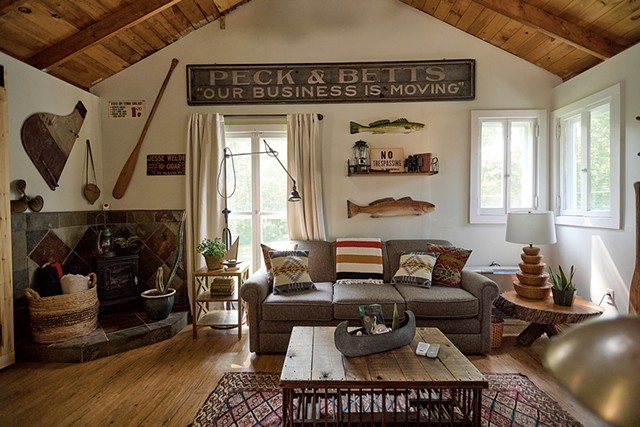 Childhood memories are some of the most powerful. Adelle Lawrence proves that every day, selling vintage items at Barge Canal Market, the business she and her husband, Jeremy Smith, own in Burlington. The same appreciation for the old and unique distinguishes their newly purchased vacation property, Camp Hickory House, near Lake Champlain in St. Albans.

"As a kid, we would always go to this camp in the Adirondacks," Lawrence said, standing proudly in the cozy two-room house she and Smith snagged in late spring. They worked quickly to renovate it for the summer season. "When we bought this place, I was picturing ... what I grew up with."

Beyond using Camp Hickory as a source of additional income, the Burlington-based couple also hoped the 1925 cottage could be their own personal escape, one they could occasionally open up to friends and family. It's a five-minute walk from a 700-foot stretch of shared beachfront. 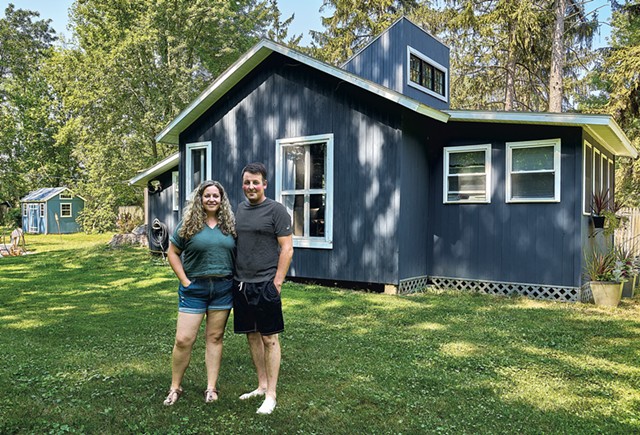 On a recent weekday, between bookings, Lawrence described the classic 20th-century escape of her childhood: rustic cabins with eclectic décor, stacks of puzzles and board games that may or may not have all their pieces, and, of note, no TV. She and Smith were adamant about making their camp screen-free — and not just because there's no good place to mount one.

"It takes away from the whole feel," Lawrence explained. Most of the walls in the 550-square-foot rental are dominated by windows looking out onto the surrounding one-acre yard, and any configuration of couch and TV would throw off the room's visual balance.

As purveyors of midcentury-modern goods at their South End shop since 2012, Lawrence and Smith know a thing or two about decorating with vintage.

Their camp has enough of the old-school vibe Lawrence described without being over the top. To bring things into the present, it's suffused with a contemporary, chic minimalism. Most of the improvements they made were small spruce-ups, as opposed to the structural changes that would have been required on 90 percent of the properties they saw.

That's not to say that getting Camp Hickory ready for rentals was simple. The couple added new laminate flooring, reduced the size of the kitchen island, layered on fresh paint and made cosmetic improvements to the dormer, which had been unfinished on the interior.

Smith also custom-built a sliding barn door that separates the bedroom from the main space. Though such doors have become a trendy accent, this one is largely practical, since there's hardly any space in either the main room or the bedroom for a swinging door.

As pickers — skilled, knowledgeable buyers who source goods for resale — Lawrence and Smith knew exactly where to find everything they needed to flesh out their vision.

First, "We looked at a lot of inspiration pictures online," Smith said. The couple pored over Instagram and Pinterest, using search terms such as "Adirondack camp," "vintage lake house" and "cabin style." 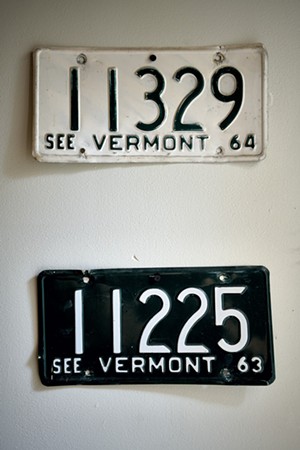 Then they bought "a lot of stuff" from Essex Junction's Five Corners Antiques, Lawrence pointed out. The two-story shop has a reputation for stocking an abundance of furniture, accent pieces, knickknacks and ephemera. The couple also sourced items from other nearby camps and estate sales, and even repurposed some things from their own shop. They sometimes ignored their shrewd profit-making instincts to perfect Camp Hickory.

"[Decorating] is a little different than when we're buying for the shop," Lawrence explained. "We went to shops, and we were like, 'This is exactly what we want, and we're gonna pay full price for that because this is our own place.'"

Some items were constructed from repurposed materials, such as throw pillows made from old Pendleton shirts the couple found on Etsy. They reupholstered a pair of armchairs with iconic Hudson Bay blankets that were too chewed up to be functional.

And, of course, Camp Hickory is packed with board games and puzzles — all of which are intact. A shelf brims with old editions of classic titles, such as Scrabble, Othello, Mille Bornes, Clue and Boggle. There's also a new, retro-inspired edition of Mystery Date, perhaps the kitschiest board game of all time.

Lawrence and Smith felt it was important not to go overboard with decorating, for both aesthetic and practical reasons.

"It's so easy to fill space with things — like, Look at these little tchotchkes, so fun — but then it's like, Where's someone gonna put their drink down?" Lawrence said.

The care they've put into curating Camp Hickory has made it a popular rental property.

Guest bookings "filled up really fast" once they put it on Airbnb for $150 a night, Lawrence said. Aside from a day or two here and there, Camp Hickory has been chock-full of tourists since it came on the market in June. It's completely booked until October, when it closes up for the winter. Lawrence and Smith didn't even have a chance to experience their own summer getaway.

"Next year, we'll definitely block ourselves out some time," Lawrence said.