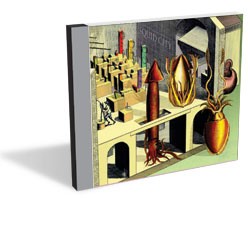 Even the inky depths of Lake Champlain couldn’t sustain a school of squid. The carnivorous calamari seldom stray from salty ocean water, and very rarely do they make albums. Fortunately for us, Burlington’s sonic cephalopods — formerly That Toga Band — turn out a nine-track exploration that’s ideal for inland afternoons: Welcome to Squid City. Under the aegis of “progressive jazz,” Squid City dart through temperate, colorful instrumentals, vamping genre giants such as Bill Frisell and Pat Metheny.

Buoyed by the twin guitars of Tyler George-Minetti and Thomas Pearo, the title track floats like dandelion spores on a summer breeze. Pearo doubles up on bass and rhythm lines, evoking the percussive phrasing of Kaki King, while George-Minetti drops delicate harmonics and dreamy electric leads. Other outings, such as “Prelude to a Mallard” and the ponderous “Drifter,” sail with appealing predictability through currents of Lanterna-like melody. These are majestic, if familiar, compositions, anchored by drummer Anthony Kareckas’ steady stick work.

Still, it’s worth applauding any band brave enough to track and produce a “live” studio debut. Recorded over three sessions at Nick Bowers Sound Recordings, Welcome to Squid City boasts a surprisingly clean mix. Indeed, the trio rewards headphone enthusiasts with ambient chatter and enough atmospherics to appease David Gilmour. If “Tearoom” feels a bit unfinished, its blissfully glacial pace and chirping birds imbue all the tranquility of a day spa. As does the perversely titled, minimalist closer “Opening Up (Part I),” which underscores a near-existential philosophy: Why fight the urge to make strange, beautiful art?

One need look no further than W. David Powell’s striking — and phallic — album design. In an era bereft of original cover art, Powell — who collaborated on the Allman Brothers’ iconic “Eat a Peach” illustrations nearly 40 years ago — assembles disparate imagery in a vibrant depiction of the band’s imagined world. Squid City seem just as content painting sublime landscapes as detailed portraits. This is a band whose jazz is many tentacled, and worth netting. Pretty heady stuff for squid.