The dead of winter is not a conventional time to install outdoor sculpture exhibits. But that didn't stop Johnson State College assistant professor Michael Zebrowski from jumping on the opportunity to be the inaugural artist-in-residence for Spruce Peak at Stowe Mountain Resort. To set up his installation, titled "SURVEY," he and assistant Martin De Geus lugged equipment through the resort's woods on a sturdy sled. They boiled water outdoors on a propane stove and poured it on the frozen ground to melt the ice, so the sculptures they erected could stand on level ground.

"If we didn't have the coffee shop [nearby], we probably would have made coffee, too," jokes Zebrowski.

Curated by Helen Day Art Center's Rachel Moore, "SURVEY" features two sets of installations, each of them lined up with a cardinal direction. The angular works, made of wood painted safety yellow, echo Spruce Peak and Mount Mansfield in shape even as they contrast with them in color. One set, "Sunrise Sunset," consists of two wooden "transits" — bright tripods with steel extenders that resemble oversize surveying tools, at 16 and 12 feet tall. A pole rigged to a pulley system extends from each tripod, and each pole is topped by a white box that could pass for a birdhouse. Cameras inside the two boxes take images every five minutes.

When he tested models of the camera boxes on a hill at JSC, Zebrowski says, he wondered if animals would colonize his sculptures. "Nothing has even pooped on it," he reports. "The birds see the camera lens and think it's an eye. They must think there's a dangerous predator in the box."

"Sunrise Sunset" is designed to capture images of its namesakes. Zebrowski will transform the time-lapse photographs of the horizon into looped videos, giving the work the semblance of a continuously moving postcard. The videos will eventually be projected on screens inside the Spruce Peak complex, where resort-goers can view them while taking a break from the slopes.

"When you're given the experience to see that, that's a different way to look at the day," Zebrowski says. 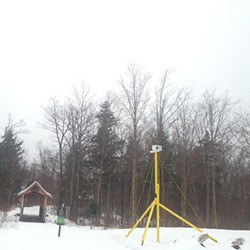 Over the coming weeks, while "Sunrise Sunset" gathers images, the screens inside the complex will show time-lapse videos depicting Zebrowski and De Geus' process of erecting and calibrating the works. Zebrowski says he hopes the sculptures and their images will inspire curiosity in onlookers.

The second sculpture set, titled "Level," was built in a similar fashion to "Sunrise Sunset," with pieces 10 and 20 feet tall. Complementing and contrasting with "Sunrise Sunset," this work is best experienced at night. Attached to its triangular pieces are lasers, whose light is only visible after dark. "Level" is secluded in a quiet spot along a snowshoe path, where the lasers reflect off evergreen branches. By contrast, "Sunrise Sunset" is easily visible in its spot beside one of the valet parking lots, with a backdrop of the Stowe Mountain Lodge complex, ski runs and Spruce Peak condominium buildings.

Zebrowski says he feels fortunate to install his art at a posh ski resort. "I like the idea of building something that responds to the site, landscape, people and culture," he says, and notes how costly the land and surrounding developments are. "Thinking about surveying the land is sort of like looking at the idea of land and property, and who it's for," he continues. "Symbolically, it's a really crazy thing."

Both Moore and Zebrowski, who has created previous installation pieces for JSC, mention how unusual it is for a ski resort to have an artist-in-residence. They see it as a smart way for AIG-owned Spruce Peak to broaden its appeal to tourists and residents of Spruce Peak Village. Moore says Helen Day solicited proposals from artists last December and presented its top two selections to the Spruce Peak Resort Association. Its members chose Zebrowki's proposal and gave him a $1,500 honorarium plus $2,000 for production fees.

"It's exciting to see a resort embrace art and culture and support local artists by giving them this opportunity," says the curator.

Zebrowski, 37, lives in nearby Morrisville and won't actually be residing at Spruce Peak. But the residency, which extends through May 1, does allow him the freedom to approach "SURVEY" as a continuously evolving project, rather than a fixed installation.

"With the residency, I feel I'm still welcome to continue the work," he says. "I feel more able to let the [sculptures] evolve, to keep trying things differently."

Zebrowski plans to update the time-lapse footage from the cameras, which will inevitably capture the lengthening of days as winter turns to spring.

"SURVEY" by Michael Zebrowski, produced and curated by Helen Day Art Center, on view through May 1 at Spruce Peak at Stowe Mountain Resort.