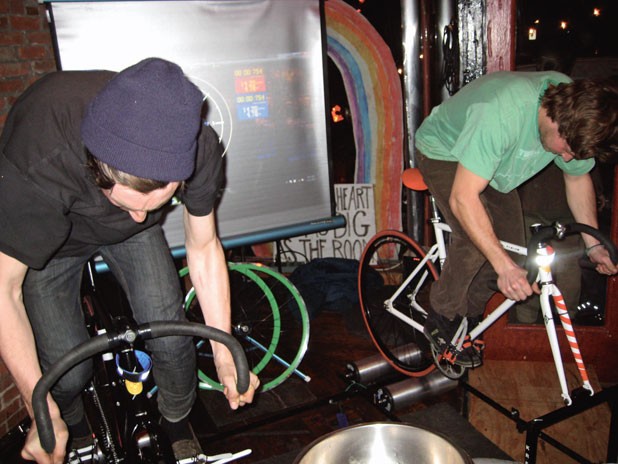 Chaka Khan’s “I Feel for You” blasts from Radio Bean’s sound system as I mount the bike positioned in the middle of the stage. It’s an appropriately punchy soundtrack for striding into battle.

I adjust the toe clips so they’re snug around my feet. I take a few practice pedal strokes. The straps seem secure enough. If they’re not, oh, well — this bike race is only 13 seconds long. There’s not much time to worry during Mad Dashes, Burlington’s new bike roller-race series.

“It’s a really good idea to stretch before you get up here,” the café’s owner, Lee Anderson, reminds the growing crowd.

Too late. I’m already in the saddle, ready to mash the pedals.

The audience standing around the stage counts down — three, two, one, go! I’m off. I ride the bike like I stole it. Of course, I’m not going anywhere, but neither is my competitor, who is perched on the bike beside mine, wild eyed, spinning her legs in a speed-freak frenzy. In races like these, the bikes are stationary, fixed to a steel frame weighted down with sandbags.

“It’s like sprinting on a stationary bike with a computer telling us who has won,” Anderson tells onlookers. “It’s as simple as that.”

With my head down and my elbows tucked to my sides, I hammer away, well off the beat of the music. It feels like I’m on the bike forever. In reality, the race is only 250 meters — slightly more than half the distance around a running track.

“I feel for you/ I think I love you,” belts Chaka Khan.

At this point, I don’t love anybody. Roller races — or Goldsprints, the contemporary name for these events — are meant to hurt. But with the pain comes the potential for glory.

Mad Dashes is most certainly about the glory. It’s also about getting people’s legs moving before bike season begins, a spring tune-up of sorts.

Roller races have a long history in the cycling world, and bicycle rollers have been used as an indoor training tool since competitive cycling began. To use rollers, a cyclist places the bike atop a series of cylinders or drums. This allows the user to ride the bike without moving forward, assuming he or she has enough balance to keep it from toppling over.

Goldsprints, which get their name from a popular Swiss beer, use a contraption similar to traditional bike rollers. For these races, the bikes’ front wheels are removed, and the forks are attached to the steel roller frame. The rear wheels still spin on rollers, which are hooked up to a device that measures distance and speed. The whole apparatus is connected to a computer and a projector that displays each rider’s time.

The bikes used for the Mad Dashes, which sit side by side on the rollers, are Origin 8 Del Pasados — one white and one black — geared so riders can reach speeds of nearly 50 miles per hour. “It’s just ridiculous. It’s wild,” says Hunt Manley, one of the event’s organizers.

Depending on the turnout, Mad Dashes can feature three race categories: 250, 500 and 2000 meters. Obviously, says Manley, the 2000-meter distance is a killer — a two-minute-plus, redline effort. The last time two cyclists attempted that distance at Mad Dashes, one of them vomited halfway through.

Mad Dashes was started by the mechanics at Old Spokes Home as a way to build “some preseason excitement,” says Glenn Eames, owner of the Burlington bike shop. It’s a good way to help people shake off the winter chill and look forward to the coming cycling season. In recent years, Goldsprint races have popped up in every major city, and 2010 saw the inaugural running of the Goldsprints World Championships in Las Vegas.

“It’s an old tradition,” Eames explains. “It’s not really about winning, but spinning as fast as you can.”

Tell that to the guys blazing on the bikes at the Bean, spinning so fast the cranks look like they’re going to melt. They want to win.

But, unlike at typical bike races, here there is no Spandex to be seen. Every one of the 15 competitors is clad in jeans, T-shirt and sneakers, except for a dude in overalls — and Bill Lockwood, who came right from work wearing an Oxford shirt and duck boots.

Lockwood’s choice of attire doesn’t seem to hold him back. He smokes his competition in the first race, pedaling 250 meters in just 11.79 seconds. Only a few other riders come close to that sub-12-second result.

One of the speedsters chasing Lockwood is Chris Norris. In his first race, he pushes so hard that his black beanie pops right off his head. The key to winning a Goldsprint, he counsels, is the start. “It definitely helps to start to sprint right off the bat. It’s just balls to the wall,” Norris says, panting a little from his first race.

For Lockwood, the trick is getting a good jump right away. Literally, he pounces on the pedals. He tries to keep his weight back, but the force of his pedal strokes sends him lurching forward on the saddle. “I feel like I’m sliding off a roof,” he says, also breathing hard a couple of minutes after his qualifying ride.

There’s a collegial feel to Mad Dashes. People are draining beers and egging on their friends before hopping on stage for their own go with the bikes. That’s why Goldsprints are held at bars or other social venues — for the community feel. So far, the Mad Dashes series has taken place at the Monkey House in Winooski, as well as at Radio Bean. The next race, on April 1, is at Burlington’s Manhattan Pizza.

When I reach the end of my race, a guy taps my handlebars, and I ease up on the pedals. I steal a quick glance at the screen behind me where our times are projected. I won, but barely — the margin of victory is just a few tenths of a second.

Stepping off the bike, I feel wobbly. I’m gulping air like a fish flopping on a boat deck. The win means I get to race again. Lucky me.

My second race — set to the tune of Heart’s galloping rock anthem “Barracuda” — goes much like the first, except that I lose. I’m one second behind, which is the equivalent of an hour when a Goldsprint race is over in less time than it takes to pull a pint.

I slide off the bike and slink back to my seat to watch the remaining races. In the final men’s contest, Lockwood takes on Norris. Anderson flips on the disco ball, which showers the stage in twinkling colored lights. “As if it wasn’t nauseating enough,” he quips into the mike. The crowd counts down, and the men are off, each looking more feral by the second.

In just 11.5 seconds, it’s over. Questionable footwear be damned, Lockwood prevails as the winner of the night. And after four sprints, the only mad dash he’s making is to the bar.