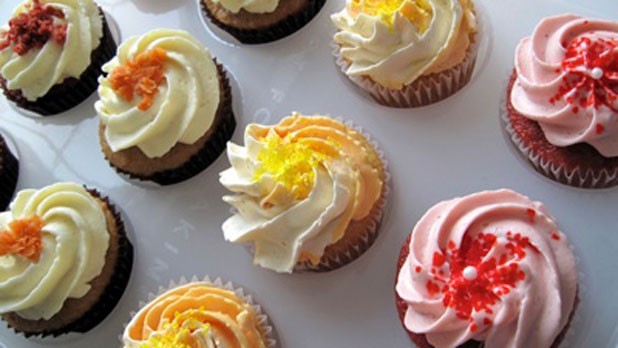 Gourmet cupcakes continue to sprout in these here hills. Three weeks ago, Hinesburg couple Nate and Sharon Miller began offering fist-sized versions from their home kitchen in a bid to dent the saturated local market.

When Nate Miller was offered a job at Williston’s MicroStrain last summer, the couple moved here from Thousand Oaks, Calif. Sharon Miller looked for her own job for a few months. But “it was hard,” she says. So she started spending a lot of time in the kitchen. “At first, I would just give [the cupcakes] away. Then people were, like, ‘Maybe you should start selling them?’”

Miller’s mother, who trained at Le Cordon Bleu culinary arts school, baked enough pastry to give her daughter a sense of what she liked. In Miller’s mind, ideal cupcakes are moist and not overly sweet. She and her husband worked through the late winter to fine-tune their cupcakes’ dense innards, which they top with ample swirls of cream cheese or butter cream, and sprinkles, nuts or cinnamon.

“I wanted them to be fluffy and just the right consistency,” says Miller, whose husband helps out Sharon in his downtime. “He can bake and make frosting,” she notes.

So far, the pair’s classical-leaning oeuvre includes 12 flavors: carrot, almond, strawberry, triple vanilla, triple chocolate, butter pecan, orange creamsicle, apple spice, coconut cream, mocha, green tea and red velvet. They’ve baked cupcakes for Higher Ground and a few other local companies, and plan to approach area retail outlets soon, as well as event and wedding planners. (A half-dozen cupcakes sell for $15; a dozen for $24.) The couple’s dream is to “have a storefront downtown [in Burlington],” says Miller, though she admits that’s a distant prospect. For now, they’ll wade into the cupcake scrimmage from home.